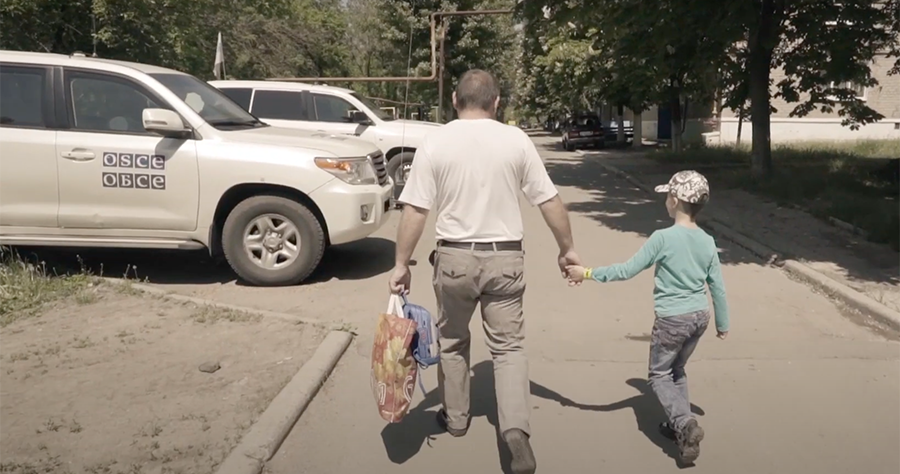 We are pleased the Special Monitoring Mission in Ukraine reported another night of zero Ceasefire Violations after the Trilateral Contact Group agreed to adopt “additional measures to strengthen the ceasefire, aiming to ensure compliance with a comprehensive, sustainable and unlimited ceasefire,” effective July 27.  We are very pleased with this development of the Trilateral Contact Group.  However, for more than six years, the civilians of eastern Ukraine have suffered.  They have seen their lives dramatically altered by the violence and chaos caused by Moscow’s efforts to destabilize Ukraine and thwart its chosen path to full integration with Europe.  Our goal is that the reality on the ground will reflect compliance with the ceasefire until there can be a comprehensive settlement of the Russia-created conflict in eastern Ukraine, and we commend Ukraine for its clear commitment to achieving a peaceful resolution.  For Russia, this latest effort to strengthen the ceasefire, if it continues to be successful, is yet another opportunity to demonstrate its readiness to implement the Minsk agreements.  This is a chance to end the conflict that it foments and to stop wasting Russian lives and treasure.  If it did it could expect the hand of friendship in working to build its own country.

In addition to implementing a comprehensive ceasefire, there are other measures that must be taken to improve the lives of civilians in eastern Ukraine, namely, designating new disengagement areas and opening critical crossing points for civilians living on either side of the Line of Contact.  Moscow has an opportunity here to do the right thing by laying the groundwork for a peaceful resolution to this conflict.  To do so, Russia need only match the political will so clearly displayed by Ukraine.  We trust that this agreement within the Trilateral Contact Group is a major step in this direction.

On a daily basis, Russia-led forces impede, harass, and sometimes detain SMM monitors.  On a weekly basis, we hear reports of signal interference or small-arms fire directed at Mission UAVs.  Just in June, over a one-month period, the SMM reported three separate incidents in which the Mission’s cameras were damaged or destroyed.  We hope that there is progress being made now with the SMM monitors’ situation now as well.

As part of its larger disinformation campaign, Russia’s Ambassador has mentioned on multiple occasions the provision of U.S. military assistance to Ukraine. I want to address this for just a moment.  The Ambassador  has attempted to cast this military aid in a negative light, alleging that the United States, and not Russia, is responsible for the continuation of this conflict.  Russia has put particular emphasis on the provision of Javelin anti-tank missiles.  The purpose of these missiles, as their description implies, is to destroy or demobilize armored vehicles, such as tanks; in other words, they are defensive weapons.  As former U.S. Secretary of Defense Jim Mattis once said, “defensive weapons are only worrying if you are an aggressor.”

Russia’s distinguished Ambassador is correct, however, in noting that the United States has supplied Ukraine with military aid.  In fact, we have provided Ukraine with nearly two billion U.S. dollars in security assistance since Moscow initiated this conflict in 2014.  Besides providing defensive Javelin missiles, the United States has also provided the Ukrainian government with HumVees, patrol boats, and counter-artillery radar systems, among other equipment, and helped fund the training of Ukrainian Armed Forces servicemembers.  None of this is a secret; in fact, we are proud to help Ukraine defend itself from Russia’s aggression, and we are transparent in making our support known.  Just last month, the American Embassy in Kyiv announced a delivery of $60 million of weapons and other equipment, and the U.S. Congress approved a $250 million aid package to Ukraine this year.

This military aid is a clear indication of our unwavering support of Ukraine’s sovereignty.  As a key strategic partner in Europe, the United States stands by Ukraine in its efforts to defend its sovereignty and territorial integrity from a powerful and, regrettably, adversarial, neighbor.

Russia’s attempted annexation of Crimea is part and parcel of Russia’s broader efforts to force Ukraine back into the Kremlin’s orbit.  Crimean Tatars and other citizens of Ukraine have endured six years of repression and political persecution under Russian occupation authorities.  More than 80 Ukrainian citizens are held by Russia as political prisoners, victims of Moscow’s crackdown on those who dare to speak out in opposition of its purported annexation of Crimea.  In only the latest example of the occupation authorities’ flagrant disregard for fundamental freedoms, on July 23, “court bailiffs” ordered Archbishop Klyment of the Orthodox Church of Ukraine to dismantle its only parish in Yevpatoriya within five days.  Should Archbishop Klyment fail to dismantle the parish, he may be subject to criminal proceedings. This is a very great difference between the way that Russia is handling its affairs there and the way that other countries in the OSCE handle their business.

We offer our condolences to the family of Crimean Tatar civic journalist and political prisoner Ruslan Suleymanov, whose three-year-old son, Musa, recently passed away and whose memorial service was held earlier this week on July 27.

Suleymanov, who is currently detained in retaliation for documenting abuses by Russia’s occupation forces, was denied the ability to attend his son’s burial.  We emphasize the horrid conditions of confinement Ukrainian political prisoners face and the toll their absence takes on their families and the message this sends to their friends and neighbors in Ukraine.

Furthermore, we condemn Russia’s use of specious terrorism and extremism charges against Muslim Crimean Tatars and Jehovah’s Witnesses for peacefully practicing their faith.  The exercise of freedoms of expression, religion or belief, association and expression, and peaceful assembly is denied and punished as occupation authorities tighten their grip on the population.

Since 2014, Russia has conscripted nearly 24,000 young Crimeans into Russia’s armed forces, which is inconsistent with Russia’s obligations under international law.  Moscow continues to militarize Crimea via the transfer of nuclear-capable aircraft and missiles, weapons, and military personnel onto the peninsula and through its provocative actions in the Black Sea, Sea of Azov, and the Kerch Strait.

The United States calls on Russia to end its occupation of Crimea and withdraw its forces and materiel from eastern Ukraine.

Mr. Chair, the United States fully supports Ukraine’s sovereignty, as I made clear, independence, and territorial integrity within its internationally recognized borders, including its territorial waters.  We do not, nor will we ever, recognize Russia’s purported annexation of Crimea.  We join our European and other partners in affirming that our Minsk-related sanctions against Russia will remain in place until Russia fully implements its Minsk commitments.   The Crimea-related sanctions will remain in place until Russia returns full control of the peninsula to Ukraine.