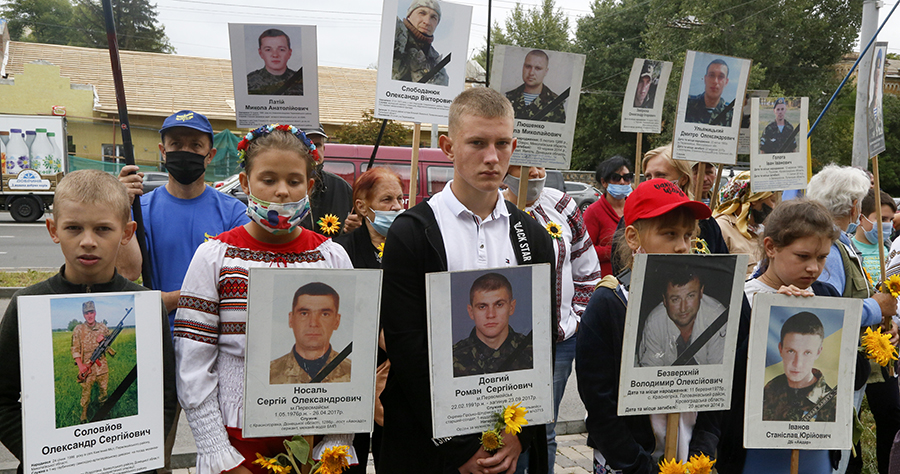 Relatives hold portraits of soldiers killed in a war conflict with Kremlin-backed separatists in eastern Ukraine, in front of the Russian Embassy in Kyiv, Ukraine, Friday, Aug. 28, 2020. (AP Photo/Efrem Lukatsky)

In their “Revolution of Dignity” in November 2013, the people of Ukraine poured into the streets to protest the efforts of then-President Yanukovych to suspend Ukraine’s path towards Europe.  The Kremlin’s response was to launch a multi-year campaign of aggression against Ukraine.

Now over six years later, the Russia-created conflict in eastern Ukraine persists.  A large portion of eastern Ukraine is now under the control of Russia-led forces, and Ukrainian authorities are denied control over 280 miles of Ukraine’s side of its international border with Russia.  The Russian government’s aggression toward its sovereign neighbor has resulted in the loss of thousands of lives and over a million persons displaced.

After dozens of recommitments to the ceasefire, the sides agreed on “additional measures” to strengthen the full and comprehensive implementation of the ceasefire, which is among the goals outlined during the December 9 Normandy Format meeting in Paris.  Between July 27 and today’s Permanent Council meeting, the Special Monitoring Mission has reported significantly lower numbers of ceasefire violations.  Although, I think the report today was 900 over this period of time, which is hardly perfect.  On several occasions, the Mission reported, for the first time since it began collecting data systematically, no ceasefire violations across the totality of the conflict area. And this is certainly a step forward

The lower levels of ceasefire violations are indeed encouraging, and we hope Russia will continue to use its influence to restrain its proxy forces, which apparently they are now doing.  The civilian communities of eastern Ukraine are long overdue for a break in the chaos and violence that has plagued their lives for more than six years.

Regrettably, the SMM continues to report casualties, albeit to a lesser extent.  In the last week, the Mission reported two civilian casualties, including one fatality.  The SMM also reported the usual instances of movement restrictions and UAV signal interference.  In its August 27 Spot Report the Mission noted it had observed the 96th Russian convoy crossing into Ukraine.  Once again, the vehicles that crossed into Ukraine did so without Ukraine’s permission.  Once again, they were marked as carrying “humanitarian aid,” but as they rolled into Russia-controlled territory, Ukrainian authorities were unable to inspect the vehicles to determine their true contents and to confirm the contents.

These reports remind us there is still work to do to implement a sustainable and lasting ceasefire, and Russia has a long way to go in fulfilling its Minsk commitments.  We appreciate the first steps.  While the sides did not announce new agreements during the most recent meetings of the Trilateral Contact Group, Ambassador Grau noted that the measures to strengthen the ceasefire were largely successful.

The United States encourages Ambassador Grau, and the sides, to continue working toward agreement on an updated demining plan, new disengagement areas, and further mutual releases of detainees.  We encourage good-faith negotiations at the Trilateral Contact Group to reach concrete steps that can help bring about a peaceful resolution to this conflict.  The steps, while encouraging, must be only the first steps to full implementation of the Minsk agreements, which is so much the subject of discussion here at OSCE.

As always, the United States closely monitors events in Crimea, where Russian occupation authorities continue to place harsh restrictions on the rights of Crimean Tatars, ethnic Ukrainians and others who oppose this occupation.  Russia continues its efforts to militarize the peninsula, and recently held live-fire, large-scale drills of its Black Sea fleet.  Russia’s purported annexation of Crimea and its provocative actions in the Black Sea, the Sea of Azov, and the Kerch Strait are part and parcel of its larger efforts to destabilize Ukraine and violate the sovereignty and territorial integrity of its neighbor.  President Putin’s August 27 visit to Crimea without Ukraine’s permission is yet another blatant violation of Ukraine’s sovereignty.

More than 90 Ukrainian political prisoners are currently held in Russia and Russia-occupied Crimea for their opposition to the occupation or for peacefully practicing their faith.  We are following an ongoing case against eight Crimean Tatars from Bakhchisaray who, like dozens of others, face terrorism charges brought in retaliation for opposing the occupation.  Despite the fact that prosecution does not even allege that these men planned or committed any act of violence, on August 31 it called for prison terms ranging from 15 to 21 years.  Among the defendants is the leader of the Crimean Solidarity movement Server Mustafayev.

Occupation authorities continue to conduct frequent raids and searches to intimidate and harass ethnic and religious minorities, including Crimean Tatars and Jehovah’s Witnesses.  On August 31, a raid resulted in the arrests of four Crimean Tatars, including journalist Ayder Kadyrov.  They were taken to the FSB building in Simferopol where they were held incommunicado, denied access to their lawyers, and pressured to sign confessions.

The United States calls on Russia to immediately cease its targeted harassment of ethnic and religious minorities in Crimea and release all Ukrainian political prisoners that it currently holds.

Mr. Chair, the United States fully supports Ukraine’s sovereignty, independence, and territorial integrity within its internationally recognized borders, including its territorial waters.  We do not, nor will we ever, recognize Russia’s purported annexation of Crimea.  We join our European and other partners in affirming our Minsk-related sanctions against Russia will remain in place until Russia fully implements its Minsk commitments.   The Crimea-related sanctions will remain in place until Russia returns full control of the Crimean peninsula to Ukraine.