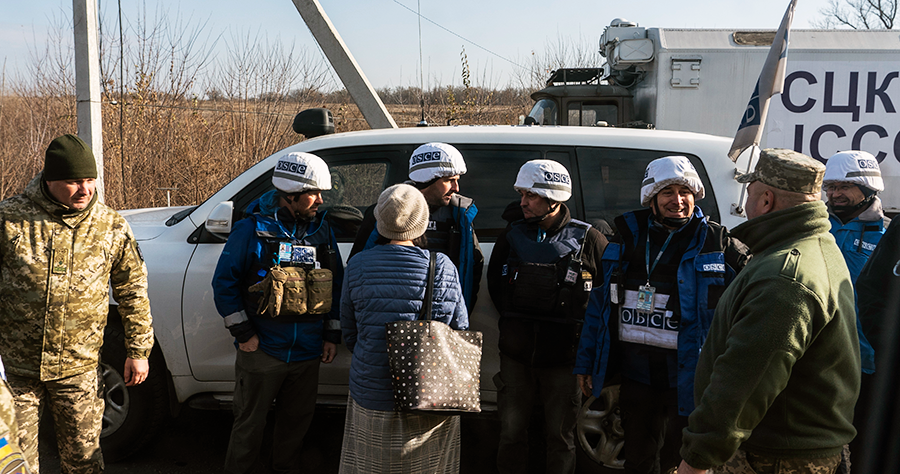 As delivered by Deputy Chief of Mission Harry Kamian
to the Permanent Council, Vienna
November 7, 2019

On November 1 and 2, Ukrainian Armed Forces and Russia-led forces issued notifications of the completion of their withdrawal of forces and hardware from the disengagement zone near Zolote. We welcome this progress toward the reduction of violence in eastern Ukraine and commend President Zelenskyy and his team for their efforts to resolve the conflict in a manner that respects Ukraine’s sovereignty and territorial integrity. We hope this recent development will help the sides continue negotiations to bring an end to this bloody, multi-year conflict. We are also hopeful that disengagement at Petrivske will begin soon and call on all sides to exercise restraint and comply with the ceasefire.

The United States is encouraged by progress at Stanytsia-Luhanska, where a temporary pedestrian bypass bridge has greatly eased the physical burdens on civilians crossing the Line of Contact. For more than five years now, this line – a direct result of Russia’s ongoing aggression – has divided the population in eastern Ukraine and created hardships for ordinary residents. We hope progress at Stanytsia-Luhanksa brings relief to the area’s inhabitants, but recognize the only long-term solution is a peaceful and diplomatic end to the conflict. The United States calls on Russia to immediately begin implementing the commitments it made under the Minsk agreements.

We regret that Russia’s refusal to commit to a summit meeting of the Normandy Quartet leaders blocks the opportunity for progress on key issues. Meanwhile, many Ukrainian political prisoners languish in Russian detention. It is high time that Russia release these prisoners and return them to their homes and families.

The situation on the ground in eastern Ukraine remains volatile, with more civilians injured and more properties damaged. Russia is the cause of this ongoing humanitarian disaster. The Border Observer Mission again reported a Russian convoy crossing into Ukraine, the 87th such convoy since the OSCE established this mission. Because of Moscow’s restrictions on the Mission, observers were again unable to determine the contents of these vehicles, and we remain skeptical that this convoy was humanitarian in nature.

Russia-led forces continued their harassment of the SMM, restricting monitors’ movement in Russia-controlled areas. We reiterate our calls on Russia to allow the SMM the freedom of movement it needs to fulfil the mandate granted by this Permanent Council, including in Crimea.
In the Package of Measures, the sides committed to ensuring the effective monitoring of the ceasefire regime, including through the use of drones and other technical equipment. The Mission’s UAVs, however, continue to encounter signal jamming and small-arms fire on a weekly basis. The harassment and attempts to damage these critical Mission assets are unacceptable. Obstruction and interference with SMM operations directly contravene the Minsk agreements and the SMM’s mandate.

Mr. Chair, the United States remains concerned about abuses in Russian-occupied Crimea. For many Ukrainians, life under Russian occupation involves harassment and political repression as well as systemic, daily abuses and contravention of OSCE principles and commitments.
Over the past five years, the United States and other participating States have spoken on a near-weekly basis about Russia’s campaign of repression against ethnic Ukrainians, Tatars, and members of other minority groups in Crimea. We reiterate our deep concern about the Ukrainians Russia has unjustly imprisoned, including dozens of Crimean Tatars who have been jailed on terrorism charges for purportedly belonging to an Islamic group that is legal in Ukraine.

We call on Russia to release Server Mustafayev, the head of the human rights group Crimean Solidarity, who published an open letter this week to urge the world to keep highlighting the plight of Crimean political prisoners. We call on Russia to release human rights defender Emir-Usain Kuku, who described his damp, crumbling, and rat-infested Russian prison cell in an interview last month. Russia should also release blogger Nariman Memedeminov, whose “final words” in court last month recalled the strength of the Crimean Tatar people, who outlasted the Soviet regime.