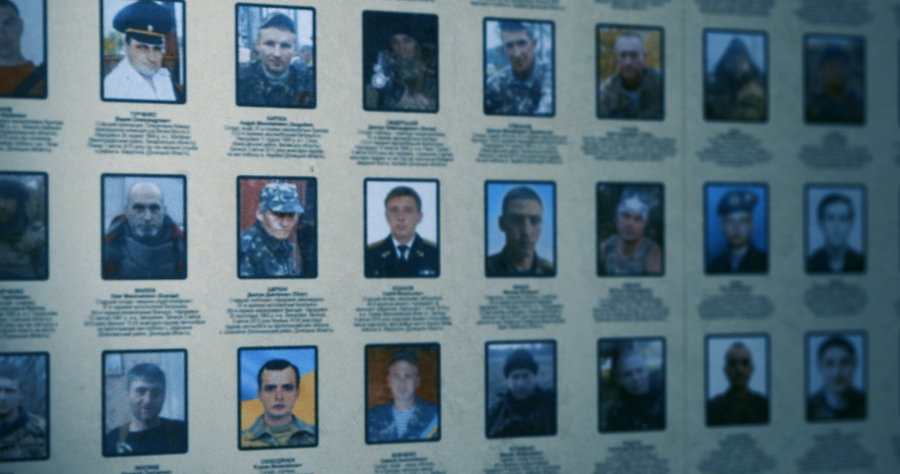 A memorial wall with photos of servicemen killed in the conflict with pro-Russian separatists in the country's east, in Kyiv, Ukraine. (AP Photo/ Efrem Lukatsky)

The unprecedented global health crisis we are facing now has not led to an easing of the conflict in eastern Ukraine.  The Special Monitoring Mission reports thousands of ceasefire violations every week, and last month the UN reported a sharp increase in the number of civilian casualties.

Russia-led forces continue to impede the movement of SMM personnel.  On a near weekly basis, SMM Spot reports have informed us of incidents where monitors have been detained, harassed, and threatened by members of the Kremlin’s proxy forces in the Donbas.

In the past week, the Special Monitoring Mission reported its movement was restricted on 24 occasions. The vast majority of these restrictions occurred in territory controlled by Russia-led forces.  The members of this Permanent Council have called for the Russian government to direct the forces it arms, trains, finances, leads, and fights alongside in eastern Ukraine to cease their harassment of the Special Monitoring Mission. We have also expressed alarm that the monitors’ safety has been jeopardized on multiple occasions by close calls with small-arms fire and explosives.

Instead of taking steps to reduce the violence in eastern Ukraine, Russia has attempted to deny its involvement in this multi-year conflict that has cost the lives of well over 13,000 men, women, and children.  Its attempts to characterize the situation as an “internal conflict” have been broadly rejected by the international community. It is time Russia showed the necessary political will to bring an end to this conflict, which helps no one.

The situation in Crimea remains dire. Crimean Tatars and others who oppose Russia’s occupation are reported to have been subjected to enforced disappearances, arbitrary imprisonment, forced “psychiatric” treatment, show trials, and torture. Reports of politically-motivated arrests and detentions by occupation authorities are commonplace.

The Russian government continues its militarization of the Crimean Peninsula, Black Sea, and Sea of Azov. Russia has also extended its multi-year campaign of conscription that has seen nearly 24,000 young Crimean residents inducted into the Russian Armed Forces. Compelling persons protected by the Fourth Geneva Convention to serve in the forces of a hostile power is a grave breach of that Convention. According to new monitoring data released this week by the Crimea Human Rights Group, occupation authorities have prosecuted over 100 young Crimean men on draft evasion charges for refusing to serve in the Army of the Occupier.

We are also deeply concerned by reports that Russia detained a member of the Ukrainian military on Ukrainian soil in Crimea on June 3– one person. We urge Russia to end its campaign of oppression in Crimea, return full control of the peninsula to Ukraine, immediately release all Ukrainians it has unjustly imprisoned, and withdraw its forces and materiel from eastern Ukraine.

Mr. Chairman, the United States fully supports Ukraine’s sovereignty, independence, and territorial integrity within its internationally recognized borders, including its territorial waters.  We do not, nor will we ever, recognize Russia’s purported annexation of Crimea.