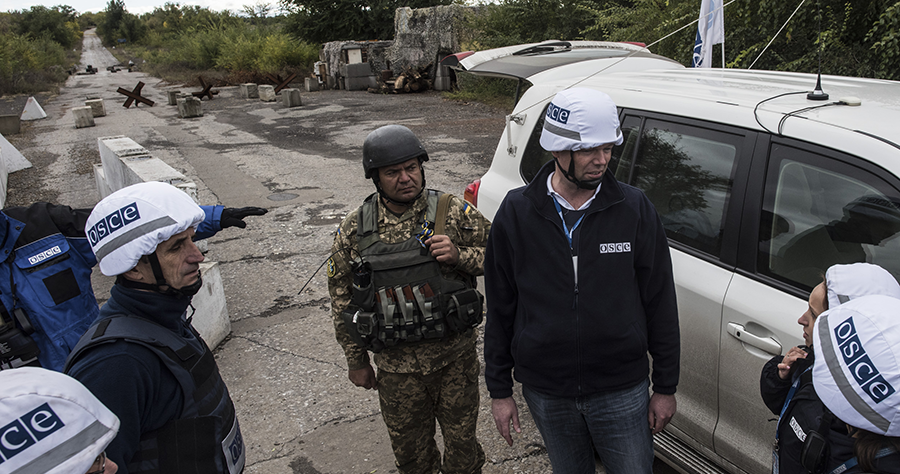 Nearly four years ago Russia began its intervention into the affairs of a sovereign state, Ukraine, just as it did in Georgia during 2008. The result of Russia’s aggression is the ongoing conflict that has cost the lives of over 10,000 Ukrainians. And while there exists an agreed upon path to peace, progress on that path seems scant, as the weekly ceasefire violations recorded in Donetsk and Luhansk remain at unacceptable levels. We call on the sides to take advantage of the momentum generated with the December 27 release of detainees to complete an “all-for-all” detainee exchange per the Minsk agreements.

Mr. Chair, reports from the conflict note that on January 26, shelling at a pumping station at the South Donbas Water Pipeline near Yasynuvata damaged a transformer, spilling 1.5 tons of specialized oil. This facility, a critical component in a system that supplies water to over one million people, has suffered other damage in the conflict, and cannot be repaired without a window of silence. This seems unlikely since Russia abandoned its role in the Joint Center for Control and Coordination (JCCC), the body that works with the parties to establish such a window. In a region where the lack of water often means no heat, further damage results in significant human suffering. Russia unilaterally withdrew its contingent from the JCCC in December, leaving the sides without an effective mechanism to establish temporary ceasefires. As we know from SMM reporting, the so-called “DPR” authorities have approved just one out of 44 requests for security guarantees for repair works in the month since Russia left the JCCC. This is not an acceptable alternative. Russia must not shirk its responsibilities and return to the JCCC immediately.

The United States is disturbed by the fact that both sides continue to stall on agreed upon mine clearance action. More troubling are the ongoing, unexplained SMM movement restrictions. In its January 25 weekly report, the SMM noted that its access was blocked seven times – six times in areas outside of government control. As aid organizations reported here in Vienna during the OSCE Ministerial Council in December, people near the line of contact are suffering this winter. At the same time, the so-called “LPR” and “DPR” are deliberately impeding the delivery of legitimate aid. The United States calls on Russia and its proxies to allow internationally-recognized humanitarian aid organizations and their local partners to deliver humanitarian assistance. If Russia wants to help address the humanitarian crisis it created, it should also contribute to the UN’s Humanitarian Response Plan. Russia has not contributed to the UN’s efforts for several years, leaving it to others to help the people Russia claims to care about.

Mr. Chair, the United States also remains concerned about those brave enough to speak out against Russia’s occupation of Crimea. Crimean Tatar activists, many of whom were transferred to Russia for incarceration, suffer in poor conditions. A lawyer speaking on behalf of Crimean Tatar activist Emir-Hussein Kuku, who is imprisoned in Rostov-on-Don, said that there are 17 prisoners sharing eight beds, who must sleep in shifts. We have not forgotten – indeed, the world has not forgotten – Oleh Sentsov, Oleksandr Kolchenko, Oleksandr Kostenko, Ruslan Zeytullayev, and the other Crimeans serving sentences in Russian prisons in retaliation for their opposition to Russia’s occupation. We again call on Russia to release them.

Russian occupation authorities‎ continue to harass and persecute Crimean Tatar activists with impunity, in what Human Rights Watch terms a “black hole for human rights.” The ongoing raids on Tatar homes and villages this week resulted in several more activists arrested on trumped-up charges. On January 25, police raided the homes of activists Enver Krosh and Ebazer Islyamov. Authorities charged and summarily convicted both men of “public demonstrations of extremist symbols” in connection with social media posts they made in 2013 and 2012, respectively. While Islyamov was only fined, Krosh, a victim of torture at the hands of the FSB in 2015, was given a ten day jail sentence. Another Crimean Tatar activist, Ismail Ramazanov was detained in Simferopol on January 23 on charges of “inciting hatred against Russians” for comments he allegedly made on the internet app Zello; as well as for possessing bullets, which he maintains were planted in his home by Russian security agents. During his hearing, Ramazanov said he had been beaten and held for two days without food or water.

Colleagues, each week in this Council, we hear from the Russian Federation that this conflict is tantamount to a so-called Ukrainian “civil war.” We all know the truth – the brutal war in Donbas is fomented and perpetuated by Russia. If Russia truly wants a peaceful resolution of this conflict, it will stop undercutting Ukraine’s sovereignty and territorial integrity. Only Russia’s actions – not its rhetoric – will demonstrate its commitment to a peaceful resolution based on the Minsk agreements.

In closing, let me reiterate that the United States fully supports Ukraine’s sovereignty, independence, and territorial integrity within its internationally-recognized borders. We seek the safety and security of all Ukrainians, regardless of language, religion or ethnicity. We do not, nor will we ever, recognize Russia’s occupation and purported annexation of Crimea. Crimea-related sanctions on Russia will remain in place until Russia returns full control of the peninsula to Ukraine. And we join our European and other partners in restating that our sanctions against Russia for its aggression in eastern Ukraine will remain until Russia fully implements its commitments under the Minsk agreements.