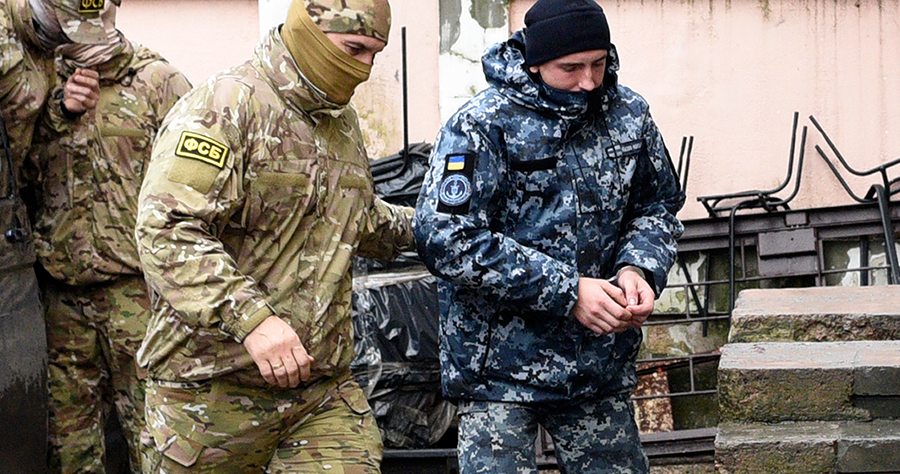 A Ukrainian sailor, right, is escorted by a Russian intelligence agency FSB officer to a court room in Simferopol, Crimea, Tuesday, Nov. 27, 2018. The Russians seized the ships and their crews. (AP Photo)

As delivered by Acting Deputy Chief of Mission Gregory Macris
to the Permanent Council, Vienna
December 20, 2018

Twenty-five days have passed since Russia illegally blocked the Kerch Strait and then rammed, fired upon, and seized three Ukrainian vessels and their 24 crew. These actions, which run in direct contravention of our shared OSCE principles and commitments, have been condemned in this Council as well as in the United Nations. The United States urges Russia to immediately release the crewmembers, return the Ukrainian vessels, and respect Ukraine’s sovereignty and territorial integrity within its internationally recognized borders, extending to its territorial waters.

The November 25 Kerch Strait attack is consistent with the Kremlin’s other acts aimed at undermining the OSCE, the Minsk process, and the prospects for peace in Ukraine. On October 27, Russian-led forces shot down a Special Monitoring Mission (SMM) long-range UAV just after it confirmed yet another convoy illegally entering Ukraine from Russia. On November 11, Russia’s proxies conducted a sham election in Russian-controlled Donbas, which was a direct breach of the Minsk agreements and consequently dismissed as illegitimate by the international community.

Russia manufactured and sustains this conflict. Attempts to apply a moral equivalency in this conflict are misguided. And Russia, as the aggressor, must take concrete and lasting steps to bring an end to it.

The United States is alarmed by reports that Russia is deploying additional fighter jets to Crimea, supposedly in preparation for another so-called “provocation” by Ukraine. Russia’s disinformation campaign seeks to justify Moscow’s ongoing militarization of Crimea. The United States welcomes the UN General Assembly’s December 17 resolution condemning Russian militarization of Crimea, the Sea of Azov, and the Black Sea. The resolution correctly states that Russia’s actions pose further threats to Ukraine and undermine the stability of the broader region.

The United States takes note of the SMM’s December 11 report on the effects of Russia’s illegal actions and obstruction of commercial shipping in the Kerch Strait and the Azov Sea. As we have stated before, Russia’s policy of sabotaging Ukrainian commercial networks is another attempt to destabilize Ukraine. The SMM reported that monthly cargo volume at the Port of Mariupol declined from 700,000 to 450,000 tons since Russia began to restrict access to the Azov Sea in April. We welcome the SMM’s reporting on this critical issue. The United States supports adding resources to ensure that the SMM retains the capacity to measure and report on the effects of Russia’s destabilization efforts at sea.

We note the renewed efforts to secure a holiday ceasefire, but also the lack of progress on the exchange of detainees. The SMM reported a sharp increase in ceasefire violations and the continued encroachment of military positions toward the Line of Contact in the December 11 weekly, including major violations in all three disengagement zones. Conditions are worsening for civilians on both sides of the Line of Contact. On December 17 Voda Donbasa was forced to shut down a water pipeline near Toretsk city affecting the water supply, and possibly the heating, for 45,000 civilians as temperatures continue to drop. SMM-brokered security guarantees, mirror patrols, and “windows of silence” help facilitate repairs to such essential services, but civilians will suffer until the conflict ends. We encourage the sides to take measures to improve the conditions of civilians in the conflict zone, starting with a holiday ceasefire.

Mr. Chairperson, the human rights situation in Russian-occupied Crimea is deplorable. We are troubled by the December 12 arrest of disabled Crimean Tatar activist Edem Bekirov at the administrative boundary line. Given that Mr. Bekirov sustained the amputation of a limb and suffers from a serious cardiac condition, diabetes, and other major health problems, authorities’ assertions that he was transporting significant quantities of heavy explosives seem even more absurd than the usual flimsy pretexts used to imprison opponents of Russia’s occupation. We are concerned by reports of his worsening health in pre-trial detention, where reportedly he has been denied medication, and we urge his immediate release. The United States is also troubled by the news that on December 13 authorities sent imprisoned leader of the Crimean Solidarity human rights movement Server Mustafayev to a psychiatric institution for a supposed month-long “evaluation.” We again condemn Russian authorities’ apparent return to the punitive psychiatry practices of the Soviet era, which subjects dissidents to isolation, restricts their access to lawyers and family, forces them to endure medically unnecessary psychiatric treatment, and seeks to equate their principled opposition to the occupation with mental illness.

The United States fully supports Ukraine’s sovereignty, independence, and territorial integrity within its internationally recognized borders, extending to its territorial waters. We do not, nor will we ever, recognize Russia’s purported annexation of Crimea. We join our European and other partners in affirming that our Minsk-related sanctions against Russia will remain in place until Russia fully implements its Minsk commitments. The separate, Crimea-related sanctions will remain in place until Russia returns full control of the peninsula to Ukraine.