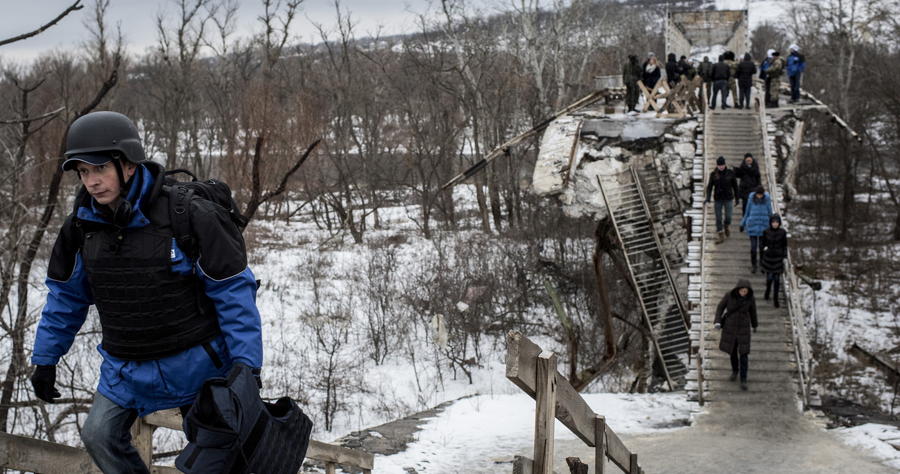 As we discuss Russia’s manufactured conflict in eastern Ukraine, we are forced once more to draw this Council’s attention to the civilian toll of the conflict.  The SMM documented separate incidents on January 16, 18, 19, and 22 in which four elderly civilians died while crossing the Line of Contact.  These are tragic, unnecessary, and preventable losses.  We call upon the sides to prioritize measures to ease the suffering of civilians on both sides of the Line of Contact.  We urge Russia to open the crossing point at Zolote and to improve crossing point facilities on the side of the Line of Contact that it controls.  Ukraine has improved the facility at Stanytsia Luhanska.  Steps to improve operations at other existing checkpoints would ease the hardships experienced by civilians trapped in the conflict zone.

The United States notes with concern the increasing number of ceasefire violations in the vicinity of the Donetsk Filtration Station.  On January 21, the SMM reported that during the reporting period a majority of the ceasefire violations occurred in the environs of this critical infrastructure that provides water for up to 600,000 people on both sides of the contact line.  Facilities such as this and other utility sites, provide lifelines to civilians and should be protected from the fighting.  We call upon the sides to establish safety zones around key civilian infrastructure sites to ensure an element of stability for those most affected by Russia’s engineered conflict in eastern Ukraine. Without such zones, the SMM will have to continue its positive, yet taxing, role of obtaining security guarantees from Russia’s various proxies, a process made more complicated by Moscow’s unilateral withdrawal from the JCCC in 2017.

Mr. Chair, the United States condemns the obstruction, intimidation, and threats that SMM patrols encounter in the areas of Ukraine controlled by Russia.  On January 21, the SMM reported that armed Russia-led militants threatened to shoot down an SMM mini-UAV, based on instructions from their superiors.  Threats such as these and the ongoing denials of access to SMM patrol movements – 85 percent of which occur in the Russia-controlled areas of the Donbas – are an affront to the SMM’s mandate and demonstrate a blatant disregard for the Mission.  That Russia has not put an end to such actions demonstrates an even clearer contempt for the OSCE’s efforts in resolving the very conflict that Russia ignited.  The United States demands Russia and its proxies cease restrictions on, and interference with, SMM patrols, equipment, and monitoring capabilities.  We once again call for the free, full, and safe access for the SMM throughout Ukraine to fulfill its mandate.

The United States calls on Russia to immediately release the Ukrainian vessels and 24 personnel that Russia seized on November 25 when it blocked the Kerch Strait in violation of international law.  The countries of Europe and the world have condemned these actions, which contravene our shared OSCE principles and commitments.  Russia’s ongoing drive to destabilize Ukraine is not working.  Ukraine is more united than ever in its chosen path toward integration with Europe.

Mr. Chair, the situation in Crimea is appalling.  Russia targets those voicing opposition to its occupation and purported annexation of Crimea, which is part of Ukraine.  Russia particularly targets Crimean Tatars critical of the occupation with prosecution and imprisonment, speciously charging them with terrorism or extremism.  For example, we are troubled by the January 22 conviction of four Crimean Tatars in Simferopol for allegedly belonging to an Islamic group that is legal in Ukraine, but which Russia has banned as “extremist.”   Crimean Tatar Muslims are not the only group under pressure – recent data from the religious freedom monitoring group Forum 18 showed a sharp increase during 2018 in fines against a wide range of religious communities in Crimea, including Baptists and Pentecostals, for speaking publicly about their faith, as well as increasing criminal prosecution of Jehovah’s Witnesses.

The United States fully supports Ukraine’s sovereignty, independence, and territorial integrity within its internationally recognized borders, including its territorial waters.  We do not, nor will we ever, recognize Russia’s purported annexation of Crimea.  We join our European and other partners in affirming that our Minsk-related sanctions against Russia will remain in place until Russia fully implements its Minsk commitments.  The separate, Crimea-related sanctions will remain in place until Russia returns full control of the peninsula to Ukraine.