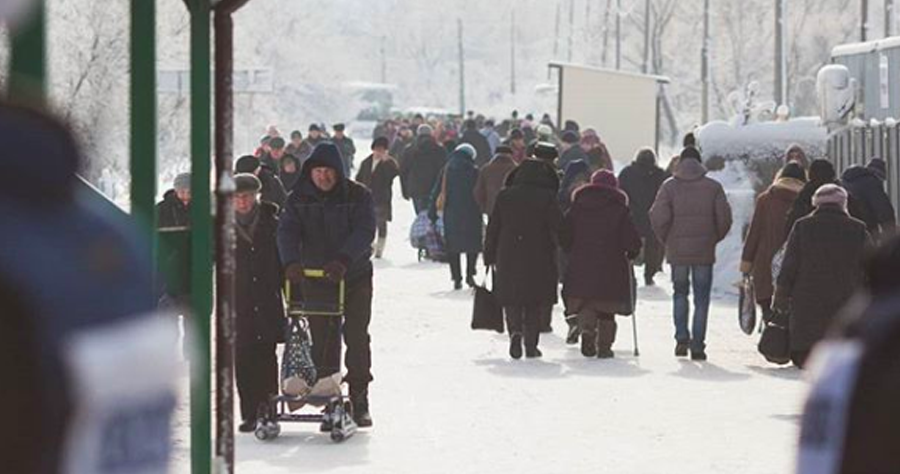 To collect pensions, visit family, or conduct business across the line of contact, civilians must undergo security checks and walk about 2 km on foot at the only crossing in Luhansk Oblast. (PHOTO: OSCE SMM)

As delivered by Acting Deputy Chief of Mission Gregory Macris
to the Permanent Council, Vienna
February 14, 2019

This week marks four years since the signing of the third and final Minsk agreement, the so-called “Package of Measures.” Although the sides committed on February 12, 2015 to “an immediate and comprehensive ceasefire,” Russia quickly undermined the commitment it had just signed. Russia-led forces shelled and captured the city of Debaltseve and more than 1,500 square kilometers of territory beyond the line of contact. Its ongoing aggression has resulted in the deaths of thousands of Ukrainian soldiers and civilians.

For four years now, the totality of the Minsk agreements outlined a viable path out of this devastating conflict. Yet for four years, we have watched Russia, and the forces it arms, trains, leads, and fights alongside, contravene the most fundamental element of the agreement, namely an immediate and comprehensive ceasefire across the line of contact.

While Debaltseve and massive casualty numbers fade in memory, daily life still remains filled with terror, injury and death in this Russia-manufactured conflict. In its February 11 daily report, the SMM documented an elementary school in Russia-controlled Zolote 5 that has been damaged at least four times by small arms and indirect fire since December 25. Children had to shelter in a basement during a recent artillery barrage, forcing school administrators to close the school indefinitely to protect the students. We call upon the sides to prioritize measures to ease the suffering of civilians on both sides of the line of contact, beginning with a complete ceasefire, withdrawal of proscribed weapons, and disengagement of forces.

We are concerned by reports of ongoing violence near the Donetsk Filtration Station. The staff of this important facility risk personal danger to ensure water reaches more than a million people on both sides of the line of contact. The introduction and establishment of safety zones around this and other civilian infrastructure, including schools and utility stations, would improve conditions significantly. We also call on Russia to direct the forces it arms, trains, leads, and fights alongside to support the opening of additional crossing points along the line of contact, which would improve conditions for the thousands of civilians who cross it regularly.

Mr. Chair, Russia’s efforts to destabilize Ukraine are not limited to fighting along the contact line. In its February 5 weekly report, the SMM highlighted the negative economic effects of Russia’s obstruction and harassment of shipping in the Sea of Azov. The director of a ship repair yard in Mariupol described a reduction in business following Russia’s attack near the Kerch Strait, during which it unjustifiably rammed, fired upon, and seized three Ukrainian naval vessels and their crew and blocked the Kerch Strait in violation of international law. We, along with the vast majority of participating States, call on Russia to respect its international obligations and immediately cease obstructing, delaying, and harassing the transit of vessels in the Kerch Strait bound for Ukrainian ports; to immediately release the seized vessels and 24 Ukrainian personnel; and to de-escalate the tensions it has stoked.

Mr. Chair, we are troubled by Russia’s ongoing repression in occupied Crimea, including reports that the Russian government is pressuring YouTube to take down a video produced by a Ukrainian human rights group that highlights the case of imprisoned Crimean Tatar human rights activist Emir-Usein Kuku. Mr. Kuku faces up to twenty-five years in prison on baseless terrorism charges in retaliation for his civic activism in opposition to the occupation. We call on Russia to end its occupation, to cease its efforts to censor information about its shameful abuses in Crimea, and to immediately release Kuku, his five co-defendants, and all of the approximately 70 other Ukrainians it has wrongfully imprisoned for their dissent.