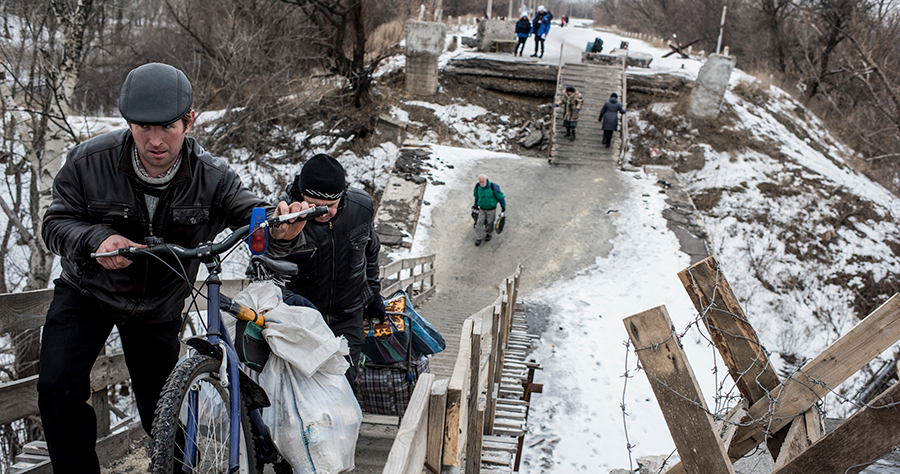 Last week Ambassador Apakan expressed hope that Chairman-in-Office Lajčak’s January visit to Ukraine would bring increased attention to the plight of civilians caught in this conflict. He noted that in the past month alone, 12 civilians have perished while crossing the contact line. Ambassador Apakan encouraged the sides to grant civilians certain protections, which would start to alleviate the hardships they face and we agree.

To save lives and ease suffering, the United States urges the sides to come to terms on the design details and to reconstruct the bridge at the Stanytsia-Luhanska crossing point. We further call on Russia’s proxies to make basic improvements to the crossing facilities they control, akin to the improvements Ukraine made to its facilities in 2018 and continues to make. The United States appeals again for the re-opening of the Zolote civilian crossing point, which has been delayed for years since the Humanitarian Working Group committed to the re-opening in 2016. Refusal by Russia and the proxies it backs to follow through on their pledge to reopen the crossing point is yet another act of the callousness toward the civilians living in areas under their control, like the access restrictions placed on international aid organizations, which Russia and its proxies impose without justification.

Ambassador Apakan expressed regret that the sides have fallen short in addressing the dangers of mines and unexploded ordnance, despite the fact that these pose the greatest risk to civilians in the conflict zone. The United States calls on the sides to make determined efforts with regard to demining, clearing areas of explosive remnants of war, and preventing new mines from being laid, as stipulated by the Trilateral Contact Group’s March 3, 2016 decision on mine action. This Russia-manufactured conflict already has claimed more than 10,000 lives, forced the displacement of 1.6 million people from the Donbas, and driven 1.1 million outside Ukraine. People should be able to return to their homes and do so without the fear of death or injury from the silent, indiscriminate threats that lurk in the ground they walk and farm.

The United States notes with great concern the SMM’s February 4 spot report in which artillery shells impacted within 100 meters of an SMM patrol near the Zolote disengagement area. Since the incident happened near a Ukrainian Armed Forces’ position, we can safely conclude that Russia-led forces fired the rounds. This incident, along with reports of small-arms fire damage to a nearby functioning school, reminds us of the persistent dangers civilians near this contact line face.

Colleagues, if we are ever to have a lasting ceasefire in this conflict, which Russia manufactured and continues to stoke, Russia’s forces must start with the agreed-upon steps of ceasing hostilities. They must withdraw weapons and place them in storage sites, as stipulated in the Minsk agreements. Let us not fall into the trap of moral equivalency here. It is not up to Ukraine to withdraw its forces from its own lands. On the contrary, Russia must command the forces it arms, leads, trains, and fights alongside to take the initial steps to implement a true and lasting ceasefire, to disengage from the line of contact, and to withdraw their formations and weapon systems from the sovereign territory of Ukraine. The United States waits, together with the rest of the international community, for Russia to respect the principles of non-intervention in the internal affairs of other states to which it has long claimed to adhere.

Mr. Chair, the international community has spoken with a united voice against Russia’s November 25 ramming, firing upon, and seizure of Ukrainian Navy vessels and crew near the Kerch Strait. We, along with the vast majority of participating States, call on Russia to respect its international obligations and immediately cease obstructing, delaying, and harassing the transit of vessels in the Kerch Strait bound for Ukrainian ports; to immediately release the seized Ukrainian personnel and vessels; and to de-escalate the tensions it has stoked.

Mr. Chair, the humanitarian situation in Russia-occupied Crimea remains deplorable. We renew our calls for Russia to release the more than 70 Ukrainians it has wrongfully imprisoned, including dozens of Crimeans. We note that Ukrainian journalist Roman Sushchenko and Crimean farmer Volodymyr Balukh will both mark their birthdays tomorrow in Russian prisons. Both men have been imprisoned by Moscow on spurious charges. Their convictions were barely-veiled pretexts for punishing their opposition to Russia’s aggression against Ukraine.