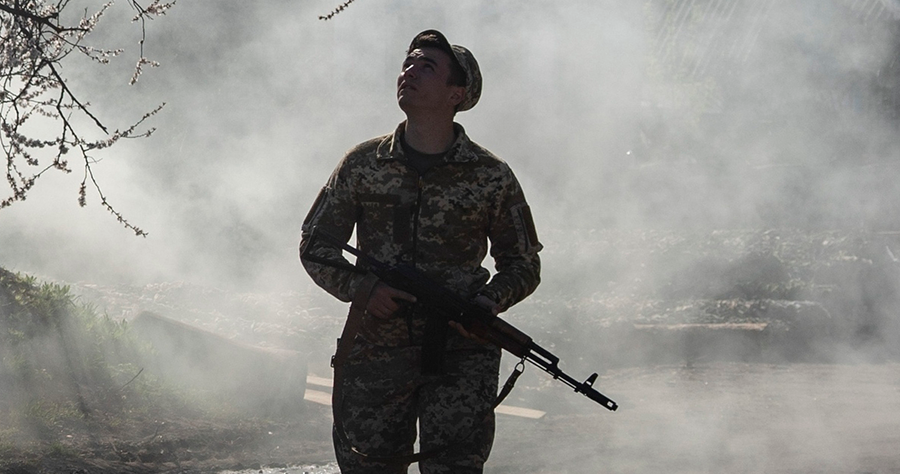 As delivered by Chargé D’Affaires Gregory Macris
to the Permanent Council, Vienna
May 9, 2019

As we mark another week in Russia’s five-year old campaign of destabilization and violence in Ukraine, the SMM recorded armed clashes all along the Line of Contact in Ukraine’s Donbas region. In its April 30 weekly report, the Special Monitoring Mission to Ukraine noted thousands of ceasefire violations, including a doubling of the use of Minsk-proscribed heavy weapons as compared to the previous week. This latest surge is a sobering reminder of the ongoing volatility that Russia, and the forces it arms, trains, leads and fights alongside, perpetuates. Only under a visible, verifiable, and irreversible ceasefire can the formula for peace – laid out in the Minsk agreements – succeed.

Russia and its proxies continue to put the lives of innocent civilians at risk. The SMM regularly documents damage to the communities under the control of Russia-led forces, and last week was no exception. Russia’s positioning of forces and firing of weapons close to homes, schools, and businesses unnecessarily endangers the lives of residents. The United States calls for the immediate removal of proscribed weapons in compliance with the Minsk agreements. Civilians should not have to face these threats, yet Russia appears determined to continue the destruction that it initiated and propagated for over five years.

In this fragile security environment, the Donetsk Filtration Station (DFS) and other critical infrastructure remain highly vulnerable to a catastrophic attack. We note with concern that shelling forced the staff of this vital water station to seek cover on three separate occasions in early May. It is imperative that all forces fully respect the Minsk agreements’ security guarantees and refrain from emplacing units in the vicinity of DFS facilities that provide potable water to over 300,000 people on both sides of the contact line.

For the past five years, this Council has borne witness to Russia’s aggression against Ukraine and its refusal to adhere to the most basic of the Minsk commitments. Russia has failed to respect the Line of Contact, leading incursions since 2014 to seize and control hundreds of square kilometers of eastern Ukraine. Russia, and the forces it arms, trains, leads, and fights alongside, have failed to respect the ceasefire, making and breaking countless efforts to quiet the guns. Russia has failed to withdraw heavy weapons, consistently deploying and firing them in proscribed areas. And Russia has failed to uphold the mandate of the SMM, permitting its forces to obstruct the mission’s mandate. The SMM’s April 30 weekly report stated that Russia-led forces restricted mission patrols 27 times in one week. No restrictions occurred in areas controlled by the elected government of Ukraine. Additionally, on May 3, electronic jamming downed an SMM mini-UAV in territory controlled by Russia-led forces. This recent loss demonstrates a pattern of SMM UAVs crashing over territory controlled by Russia-led forces after encountering severe jamming from what is likely the use of advanced electronic warfare systems. Russia wants to blind the SMM – and therefore all OSCE participating States – in order to mask its direct involvement in the conflict; involvement that includes arming, training, leading, and fighting alongside forces in eastern Ukraine. Russia has never accounted to the Council for the presence of its forces in eastern Ukraine, nor has it explained the presence of Russian weapon systems that are not, and never have been, a part of Ukraine’s arsenal.

Mr. Chair, President Putin’s decision to expedite Russian citizenship to Ukrainian citizens, including those living in Russia-controlled Ukrainian territory, is a highly provocative action and an attack on Ukraine’s sovereignty. Russia should reverse this policy.

We also call on Russia to immediately release the Ukrainian vessels and 24 crewmembers that it seized on November 25. Both of these acts were unjustified and dangerous escalations.

Mr. Chair, this week the Crimean Human Rights Group released a list of 86 Crimeans it considers unjustly imprisoned for their political views or religious beliefs. We are troubled by news that Crimean farmer Volodymyr Balukh’s time in harsh solitary confinement in Russia’s Tver region has been arbitrarily extended for an additional 15 days. We find it unacceptable that Balukh is apparently being denied visitation from Ukrainian consuls because Russian authorities are suddenly claiming without basis that he is a Russian citizen. Oleksandr Shumkov, another Ukrainian prisoner in the same facility, recently reported beatings and other reprisals from prison authorities because of his pro-Ukrainian views. We call on the Russian authorities to immediately and unconditionally release these and all others it has unjustly imprisoned.