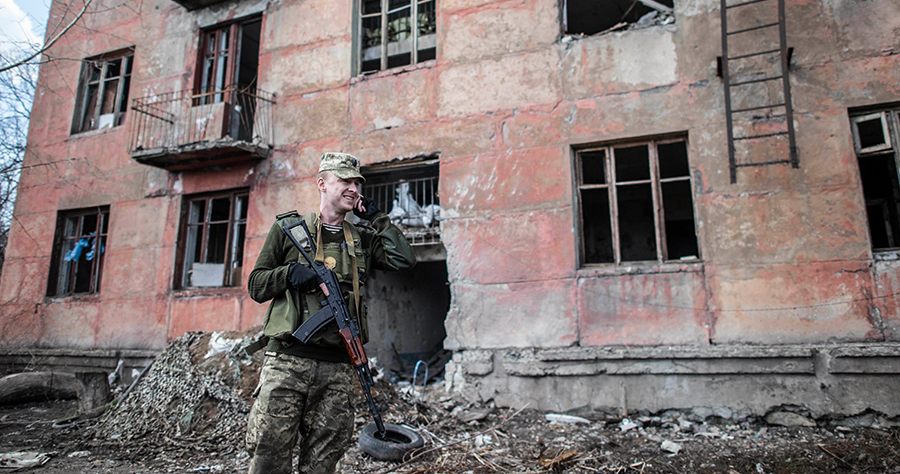 A Ukrainian solder speaks by phone in front of a destroyed house as he patrols in the village of Zolote 4, eastern Ukraine, Friday, March 29, 2019. (AP Photo/Evgeniy Maloletka)

Mr. Chair, as SMM Chief MonitorAmbassador Apakan noted last week, there has been a creeping and pernicious re-engagement in the three disengagement areas along the Line of Contact in eastern Ukraine. Tensions remain high in and around the Zolote disengagement area, and the lack of progress on the withdrawal of Russia-led forces is worrisome. In its April 2 weekly report, the SMM recorded a nearly eight-fold increase in ceasefire violations inside the Zolote disengagement area. Furthermore, within this particular disengagement area, SMM monitors continued to spot anti-aircraft guns, armored fighting vehicles, and large numbers of anti-tank mines. Mind you, this is the area designated in 2016 from which Russia and its proxy forces were to start their withdrawal of forces from sovereign Ukraine. We support disengagement along the contact line, but we note that disengagement alone is not sufficient. Russia must fulfill its Minsk commitments by withdrawing all of its armed formations from eastern Ukraine. The full implementation of the Minsk agreements includes submission of comprehensive weapon inventories, verified withdrawal of proscribed weapons, and complete and unfettered access for the SMM throughout the entirety of Ukraine.

Mr. Chair, the United States is concerned about the increasing interference with civilians traveling within the conflict zone. According to SMM reporting on April 2, Russia and its forces closed the pedestrian checkpoint in Betmanove. More than 4,000 people living on both sides of the contact line use this checkpoint regularly to go to school and to work. An alternate route existed, but Ukrainian authorities were forced to close the Mariyinka crossing point on April 5 after sniper fire, reportedly from Russia-controlled territory, injured two Ukrainian uniformed personnel working the crossing point. Mr. Chair, these events provide further evidence of Russia and its proxies’ disregard for the civilian population in the conflict area, particularly as Ukraine’s overtures to reopen the Zolote crossing point and improve the Stanytsia Luhanska Bridge have gone unanswered.

Mr. Chair, this Council recently renewed the mandate for the SMM, in part because the SMM is the primary source for unbiased reporting and monitoring of the parts of eastern Ukraine still under Russia’s control. The Minsk agreements called on the OSCE to provide effective monitoring and verification “using all technical equipment necessary.” We, therefore, regret that on at least five instances during the week of March 25, heavy machine gun or small arms fire was directed at SMM UAVs, four times in areas controlled by Russia-led forces and once in an area controlled by Ukraine. These instances occurred after the SMM gave notice of the UAV flights in the area. As well, SMM monitors recorded gunfire and explosions during the patrols near critical infrastructure during the same reporting period, despite security guarantees by both sides. During the same period of time, Russia-led forces were responsible for 19 of the 20 restrictions to the SMM’s freedom of movement. Most alarmingly, on April 2, while traveling near Russia-controlled Zaichenko, a civilian vehicle driven by Russian proxy forces twice drove in a threatening and reckless manner toward an SMM patrol vehicle, forcing the patrol to take evasive action to avoid a collision. Aggressive behavior toward our monitors is categorically unacceptable. The United States calls upon Russia to cease immediately its campaign of obstruction and interference with SMM monitors, patrols, and assets, which is in direct contravention of the Minsk agreements.

The United States calls on Russia to immediately release the Ukrainian vessels and the 24 crewmembers that it seized on November 25. Russia’s ramming and firing on the Ukrainian naval vessels, which wounded three sailors, and its blocking of the Kerch Strait were an unjustified and dangerous escalation.

Mr. Chair, the United States remains concerned about the unjust imprisonment of growing numbers of Crimeans and other Ukrainians. On April 4, the Sevastopol city so-called court sentenced two members of a Sevastopol-based think tank, Volodymyr Dudka and Oleksiy Bessarabov, to 14 years in prison on dubious charges of “subversive activities.”

We also are following the case of 24 Crimean Tatar civil society activists who were arrested on terrorism charges during March 27-28 raids. According to NGO monitors, this was the largest mass arrest since the Russian occupation began and we believe it was an act of reprisal for the Crimean Solidarity movement’s activism. More than two weeks after their arrest and transfer to Russia, only four of these men have reportedly been given access to lawyers, and reports indicate that at least three were severely beaten during arrest. We call on Russia to release all the Ukrainians it has wrongfully imprisoned.