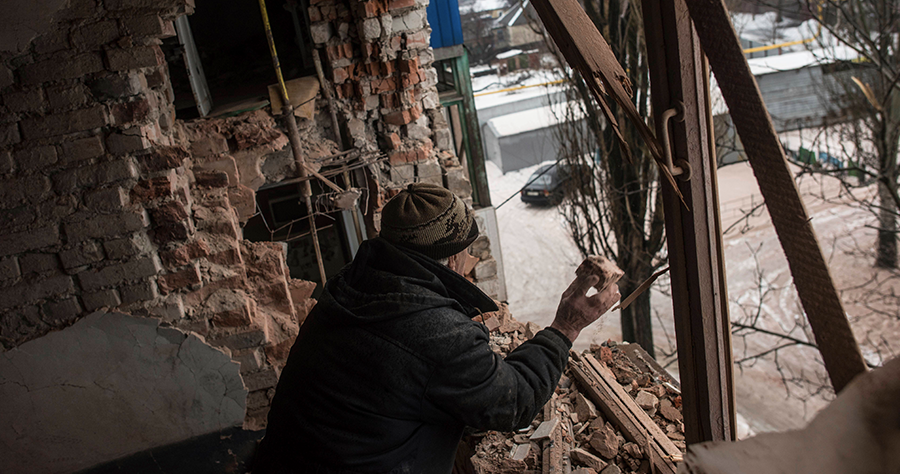 As delivered by Acting Deputy Chief of Mission Gregory Macris
to the Permanent Council, Vienna
March 14, 2019

The United States views the Minsk agreements in their entirety as the best avenue to a peaceful end to Russia’s manufactured conflict in the Donbas. We take note of the Trilateral Contact Group’s effort that resulted in the March 8 renewed ceasefire commitment, and we welcome any respite to the violence and humanitarian suffering. Tensions before its implementation were worrisome in Luhansk, particularly so in Zolote, and a break in the violence is needed. Although this recommitment is encouraging, there will be no peace in the Donbas until Russia ends its ongoing violations of Ukraine’s sovereignty and territorial integrity. Russia’s campaign of violence, intimidation, violations of international law, and defiance of OSCE commitments continue and should remain the focus of the international community. The United States calls upon Russia to disengage its forces and withdraw its armed formations as well as those it controls in accordance with the commitments it made in the Minsk agreements.

While any break in the fighting should be encouraged and applauded, more is needed. The best way to calm tensions and restore trust is through full implementation of the Minsk agreements, including the submission of comprehensive weapon inventories, verified withdrawal of proscribed weapons, and complete and unfettered access for the SMM throughout the entirety of Ukraine. To ease the suffering of those living in the conflict area, progress is desperately needed on humanitarian issues – such as the exchange of detainees, humanitarian mine action, opening the crossing point at Zolote, and reconstruction of the Stanytsia Luhanska bridge.

We welcome the SMM’s additional reporting on the security situation around the Donetsk Filtration Station in its March 5 weekly report. 1.2 million people in settlements on both sides of the contact line rely on the facility’s fresh water. Despite assurances from the sides, the SMM has recorded over 9,800 ceasefire violations within 15 kilometers of the facility in 2019. The region continues to confront the possibility of a large-scale humanitarian and environmental crisis far greater than experienced to date. The United States calls on the sides to implement safety zones around critical humanitarian infrastructure, such as the Donetsk Filtration Station. We also note with concern continued shelling near water pumping stations that supply clean water to millions on both sides of the line of contact. It is crucial to establish and then adhere to no-fire areas around such sites.

Mr. Chair, in total, six UAV assets have been lost since July 2018 over territory outside of the Ukrainian government’s control. The United States, along with the rest of this Council, awaits the full explanation of the February 18 downing of one of the SMM’s long-range UAVs. The United States demands Russia account for the October 27, 2018, downing of another SMM long-range UAV, which was shot down along the internationally recognized Russia-Ukraine border. We echo the calls by the EU and participating States for SMM monitors – and their means of technical collection – to have full and unhindered access to the entire territory of Ukraine within its internationally recognized borders.

The United States calls on Russia to immediately release the Ukrainian vessels and 24 crew members that it seized on November 25. Russia’s ramming and firing on the Ukrainian vessels, which wounded three sailors, and its blocking of the Kerch Strait were unjustified and outrageous acts of violence. Countries across the OSCE region and the world have condemned Russia’s actions.

Mr. Chairperson, the United States remains deeply concerned about Russia’s ongoing violations of international law and its defiance of OSCE principles and commitments in Crimea. Days from now we will mark the fifth year of Russia’s so-called “treaty” attempting to annex Crimea. This action illustrated Russia’s blatant disregard for the rules-based international order. Russia’s plans to conduct large-scale military exercises in occupied Crimea to mark the anniversary further erode Russia’s reputation and exacerbate tensions. The international community has overwhelmingly condemned and rejected Russia’s aggression against Ukraine, including its armed seizure and ongoing occupation of Crimea. We reiterate our calls for Russia to return full control of the Crimean peninsula to Ukraine.

We call for Russia to release the more than 70 Ukrainians it has unjustly imprisoned. We are concerned by recent reports of Russian authorities’ harassment of individuals seeking to monitor the trials of these prisoners. On March 11, police in Rostov-on-Don reportedly arrested a group of four Crimean Solidarity activists for their efforts to monitor the trial of several Crimean Tatars on charges of alleged terrorism widely believed to be baseless.