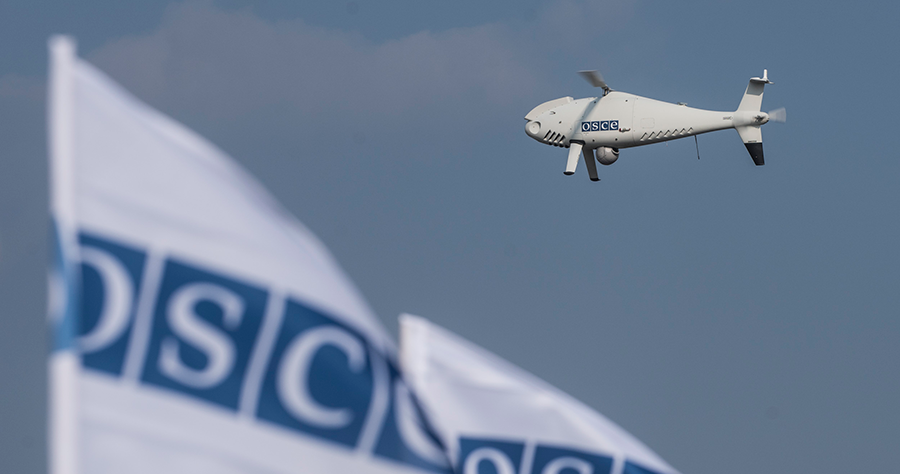 Civilians living near the Line of Contact face the worst of Russia’s manufactured conflict in eastern Ukraine. On February 25 the SMM reported that two persons were killed and three were injured in a mine explosion near a checkpoint close to the Line of Contact. Additional SMM reports over the past two weeks describe multiple instances of damage to residences on both sides of the Line of Contact. These incidents occurred against a backdrop of rising numbers of ceasefire violations and increasing use of Minsk-proscribed weaponry. The United States calls on the sides to make good on their mine action commitments, implement a true and lasting ceasefire, withdraw forces from the Line of Contact, and remove proscribed weapons from the security zone as stipulated by the Minsk agreements. Safety zones should be established around critical pieces of civilian infrastructure.

Mr. Secretary General, we appreciate your briefing this morning on the loss of the UAV. We agree with you that the February 18 crash of an SMM long-range UAV is a great loss for the Mission. Last year, Chief Monitor Apakan called for a “permissive security environment” to allow the long-range UAV program to restart, and we reiterate his call today. The United States urges all sides to facilitate a full and impartial SMM investigation into the crash. Again, let me express our appreciation to the Secretary General for his detailed report today and formally request that the Council be regularly updated in a timely manner as the investigation follows through.

Mr. Chair, we are mindful that Russia continues to withhold information from the Council regarding the UAV it downed on October 25, 2018, near the internationally recognized Ukraine-Russia border. Let us not forget that this UAV was shot down while recording Russia-led forces using an illegal border-crossing. Restarting this element of the monitoring program took long and painful negotiations. Let us recall a previous contractor pulled out after losing multiple vehicles over Russia-controlled areas of Ukraine. Participating States ultimately committed to the long-range UAV program and its costs and risks because, like other SMM monitoring modalities, this program gathers the facts on what is happening in eastern Ukraine.

The SMM’s mini- and medium-range UAV programs also face regular harassment from Russia-led forces. On February 18, the SMM recorded what appeared to be Russian proxies targeting a mini-UAV with small arms fire while it flew over Russia-controlled territory. On February 16, Russian proxies at a Russia-controlled checkpoint fired 60 rounds at an SMM medium-range UAV, only stopping when a nearby SMM patrol reminded them that it was a civilian UAV.

Mr. Chairperson, these incidents are troublingly common. The SMM notifies the sides of its UAV flight plans. The SMM’s mandate dictates that it should have access throughout Ukraine. Although checkpoints and landmines frequently prevent this access, the SMM’s cameras and UAVs enable it to fulfill its mandate when ground patrols cannot.

The United States supports the work of the SMM in monitoring ceasefire violations, safeguarding repairs to civilian infrastructure, and documenting the humanitarian impact of this conflict. We call on all sides to allow the SMM unhindered access throughout Ukraine, including its airspace, and in Crimea.

The United States calls on Russia to immediately release the Ukrainian vessels and 24 crew members that Russia seized on November 25 when it blocked the Kerch Strait in violation of international law. The countries of Europe and the world have condemned these actions.

Mr. Chair, the United States is concerned about the fate of Ukrainian citizen Volodymyr Balukh, who was unjustly imprisoned in Simferopol on charges of terrorism for his opposition to Russia’s purported annexation of Crimea. On February 18, Mr. Balukh was illegally transferred to a prison in Russia’s Krasnodar region, in violation of the Geneva Conventions. On February 26, he was transferred again to the Tver region – approximately 1,500 kilometers from Crimea. The United States calls on the Russian Federation to release Mr. Balukh and all of the 70 plus Ukrainian prisoners of conscience held by Russia.