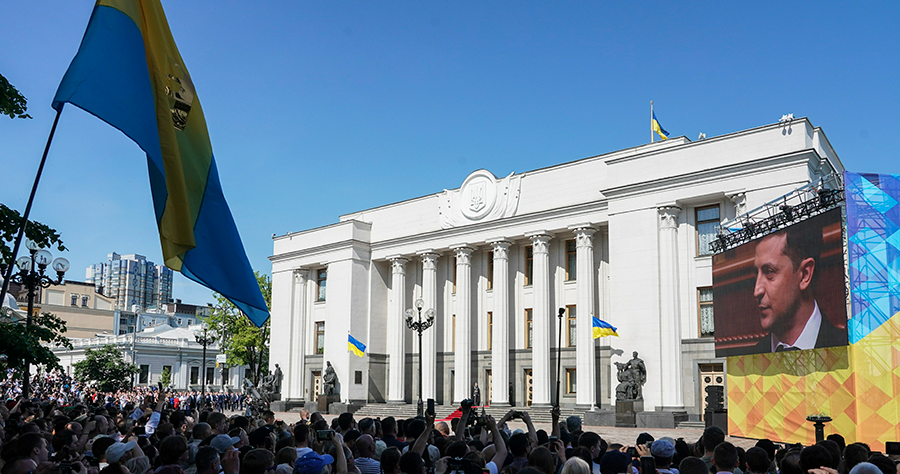 People gather in front of Verkhovna Rada, the Ukrainian parliament, during the inauguration ceremony of new Ukrainian President Volodymyr Zelenskiy, right on the screen, in Kiev, Ukraine, Monday, May 20, 2019. (AP Photo/Evgeniy Maloletka)

As delivered by Chargé d’Affaires Gregory Macris
to the Permanent Council, Vienna
May 23, 2019

I would like to commend Ukraine for its peaceful transfer of power last week following its recent presidential election. Ukraine’s democratic development stands in contrast to its neighbor Russia and demonstrates that Moscow’s campaign to destabilize Ukraine is failing.

Recent SMM reporting has highlighted Russia’s ongoing obstruction of SMM patrols and operations and its targeting of UAVs, all of which hinder the SMM in implementing its mandate. The United States calls upon Russia to cease its persistent obstruction of SMM operations and to allow the SMM to fully implement its mandate, which includes safe and secure access throughout the entirety of Ukraine, including its international border with Russia, the maritime areas over which Ukraine’s sovereignty extends, and Crimea.

Russia has engaged in a campaign of obstruction in the Kerch Strait to choke off, economically and socially, the coastal areas of Ukraine along the Sea of Azov. In the May 14 Weekly Report, the SMM reported that a sizable drop in cargo volumes in Ukraine’s Berdiansk port during 2018 had caused tax revenue to fall, resulting in a significant budget gap in the city’s finances. According to the deputy mayor, Russia’s obstruction of lawful commercial shipping in the Kerch Strait has led to delays in transit times, causing shippers to avoid the port. Russia must keep the Kerch Strait and Sea of Azov open to shipping transiting to Ukrainian ports.

The United States also calls on Russia to immediately release the Ukrainian vessels and 24 crewmembers that it seized on November 25. The international community has rejected these unjustified and dangerous acts. We are troubled by reports that authorities in Lefortovo detention facility, where the crewmembers are being held, have in several cases, denied the captive Ukrainians access to their lawyers or the ability to meet with them in private.

Madame Chair, members of this Council have strenuously condemned President Putin’s provocative decrees that expedite Russian citizenship for Ukrainian citizens living in Russia-controlled Donbas and for former residents of Crimea. The United States calls upon Russia to reverse this destabilizing policy, which is an attack on Ukraine’s sovereignty.

Last week, as the world observed the 75th anniversary of the deportation of hundreds of thousands of Crimean Tatars, Russia continued its unrelenting campaign of harassment and repression against them and others who oppose its occupation of Crimea.

We are following with concern the case of 24 Crimean Tatars arrested on March 27 and transported into Russia in violation of international law. The May 14 closed courtroom decisions to extend their detention until August are deeply troubling. These men and all Ukrainians whom Russia has imprisoned for exercising their human rights and fundamental freedoms should be immediately released. We are also concerned that Crimean farmer Volodymyr Balukh, who was illegally transferred to Russia to serve out an unjust prison sentence, has had his detention in solitary confinement extended for a fourth time. Russian officials speciously claim that Balukh is a Russian citizen in order to deny him access to Ukrainian consular services.

The United States fully supports Ukraine’s sovereignty, independence, and territorial integrity within its internationally recognized borders, including its territorial waters. We do not, nor will we ever, recognize Russia’s purported annexation of Crimea. We join our European and other partners in affirming that our Minsk-related sanctions against Russia will remain in place until Russia fully implements its Minsk commitments. The separate, Crimea-related sanctions will remain in place until Russia returns full control of the peninsula to Ukraine