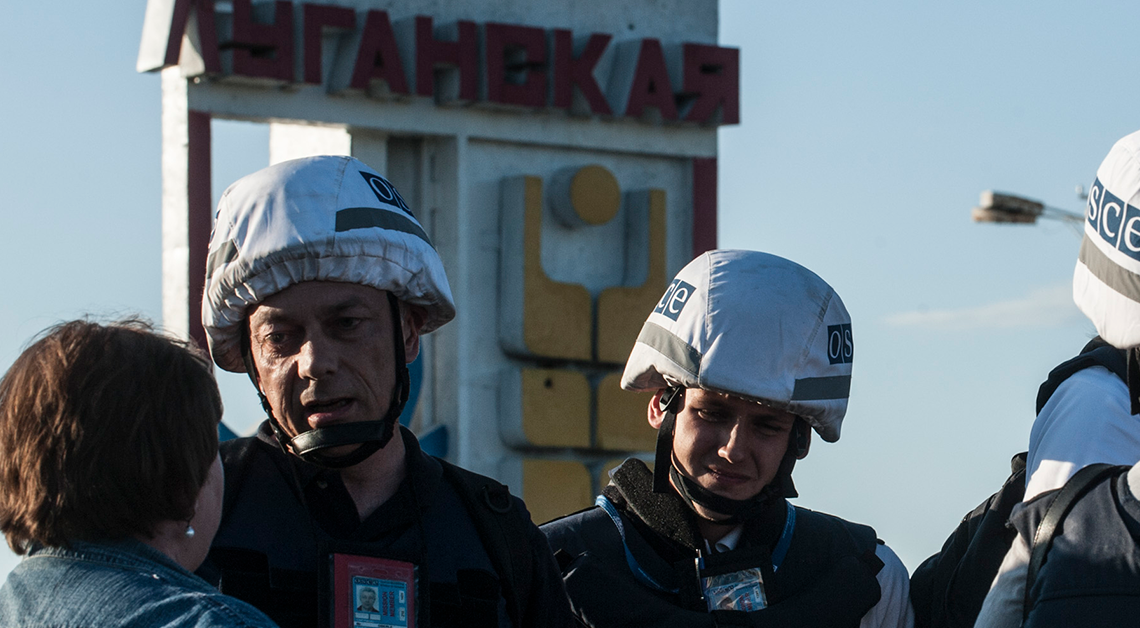 As delivered by Chargé d’Affaires Harry Kamian
to the Permanent Council, Vienna
May 30, 2019

SMM reporting in recent weeks has portrayed a worrying period of volatility in eastern Ukraine. Over the past ten days, the SMM reported several spikes in ceasefire violations, including persistent small-arms fire directed at its mini-UAVs.

Russia’s ongoing aggression in Donbas subjects Ukrainian civilians to constant danger as they attempt to go about their daily lives. Civilians endure harassment, long wait times at crossings and checkpoints, and shelling and gunfire, resulting in injuries and occasionally death.

The safety of SMM monitors is a key concern for the United States and most participating States. We are alarmed by the proximity of explosions to SMM personnel in the Zolote disengagement area and small-arms fire in the vicinity of the SMM near Russia-controlled Molodizhne.

Russia targets the SMM’s UAVs with small-arms fire and signals interference and obstructs SMM patrols and operations, blocking access in all three disengagement areas. To implement its mandate, the SMM requires safe and secure access throughout the entirety of Ukraine, including its international border with Russia, the maritime areas over which Ukraine’s sovereignty extends, and Crimea. The United States calls on Russia and the forces it arms, trains, leads, and fights alongside to cease the persistent harassment of the SMM and end the targeting of its UAVs, which are key assets of the mission and indispensable to carrying out its operations.

Madam Chairperson, we also are concerned over recent SMM reports of more than 100 explosions in the immediate vicinity of the Donetsk Filtration Station. More than a million people on both sides of the contact line rely on the fresh water supplied by this facility, yet fighting threatens the lives of the station’s workers and their ability to supply this vital resource. We reiterate the need to establish and adhere to no-fire areas around the Filtration Station and other key infrastructure sites.

We must not lose sight of the fact that Russia instigated this conflict and prolongs it by failing to fulfill its Minsk commitments. Russia’s assertions that Ukraine must act first are baseless, since Ukraine has already taken important steps to implement its political commitments despite Russia’s inaction.

Madam Chair, six months have passed since Russia seized three Ukrainian navy ships and 24 crewmembers in the Black Sea near the Kerch Strait on November 25. On May 25, the International Tribunal for the Law of the Sea ordered Russia to release the three ships and release the detained personnel and return them to Ukraine. Russia refused to participate in the hearings and has so far failed to comply with the Tribunal’s order. We call on Russia to return these ships and personnel to Ukraine immediately.

In Russia-occupied Crimea, authorities abuse those who oppose the occupation. May 24 was the three-year anniversary of the disappearance of Crimean Tatar Ervin Ibragimov, who has been missing since traffic police pulled him over and forced him into a waiting van. He is just one of several Crimean Tatars who have disappeared without a trace. Others have been found dead after being detained by occupation authorities. No one has ever been held to account for any of these abuses. We call on Russia to end its appalling record of impunity by investigating Ibragimov’s whereabouts and prosecuting those responsible for these disappearances.

We reiterate our concern about the welfare of unjustly imprisoned Ukrainians. This includes the disabled Crimean Tatar activist Edem Bekirov, whose health has deteriorated since he was placed in pre-trial detention in December on terrorism charges widely seen as baseless.

On May 27, Bekirov’s lawyer reported that investigators are offering to grant him house arrest in exchange for a full confession, an apparent attempt to leverage his worsening health to coerce false testimony. Russia should halt this shameful behavior and immediately release Bekirov and all other arbitrarily imprisoned Ukrainians.

The United States fully supports Ukraine’s sovereignty, independence, and territorial integrity within its internationally recognized borders, including its territorial waters. We do not, nor will we ever, recognize Russia’s purported annexation of Crimea. We join our European and other partners in affirming that our Minsk-related sanctions against Russia will remain in place until Russia fully implements its commitments under Minsk. The separate, Crimea-related sanctions will remain in place until Russia returns full control of the peninsula to Ukraine.