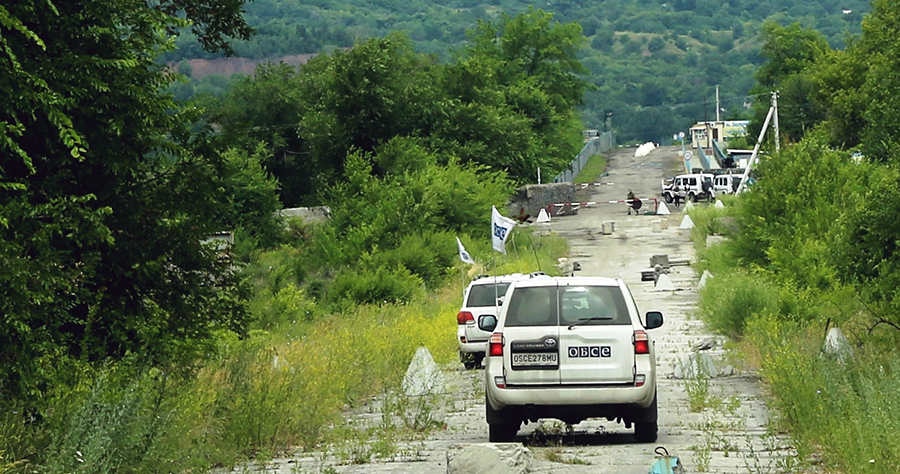 As delivered by Acting Deputy Chief of Mission Gregory Macris
to the Permanent Council, Vienna
June 20, 2019

Some 13,000 lives have been lost, over 30,000 injured, and more than 1.5 million persons displaced because of Russia’s ongoing aggression in eastern Ukraine. As Russia and the forces it arms, trains, leads, and fights alongside foment instability and commit acts of violence, it is civilians who suffer.

Once again, the diligent and meticulous work of the SMM monitors has provided key insights into the situation on the ground, particularly as it affects civilians.

On June 7, the SMM learned that two local men were injured when their tractor struck an unknown object that subsequently detonated. The SMM later assessed that object to be an anti-tank mine. The once fertile agricultural land of eastern Ukraine now holds grave danger for the people who rely on it for their livelihoods.

The positioning and use of heavy weapons, as well as the deployment of mines in the vicinity of schools, residences, hospitals, and agricultural areas contravenes the Minsk commitments and is unacceptable. We can only speculate about the contents of the shipments identified by the UAVs, as Russia obfuscates its role in the conflict in eastern Ukraine by hindering the activities of the SMM, including the UAVs.

This week the SMM UAVs once again experienced GPS jamming. These UAVs play an invaluable role in providing transparency in the conflict zone, but on a near-weekly basis, we hear reports of jamming or small-arms fire directed at them. Any type of interference with SMM operations is unacceptable.

The SMM monitors also face frequent restrictions on their movement. We call on the sides to ensure that monitors are afforded access to complete their work.

More than six months after Russia’s unjustified attack on and seizure of three Ukrainian vessels and 24 crewmembers near the Kerch Strait, those 24 individuals remain incarcerated in Russia.

We call on Russia to release these 24 crewmembers immediately and allow them to return home to their families in Ukraine.

In Crimea, Russian occupation authorities target ethnic Ukrainians and Crimean Tatars for harassment, detention, and imprisonment. We are troubled by the news that on June 18, a court in Russia sentenced five Crimean Tatars to between 12 and 17 years in prison for belonging to the Islamic organization “Hizb-ut-Tahrir.” This organization is legal in Ukraine, of which Crimea remains a part. We call upon Russia to end its campaign of abuse in Crimea, to release all those whom it has wrongfully imprisoned, and return control of Crimea to Ukraine.