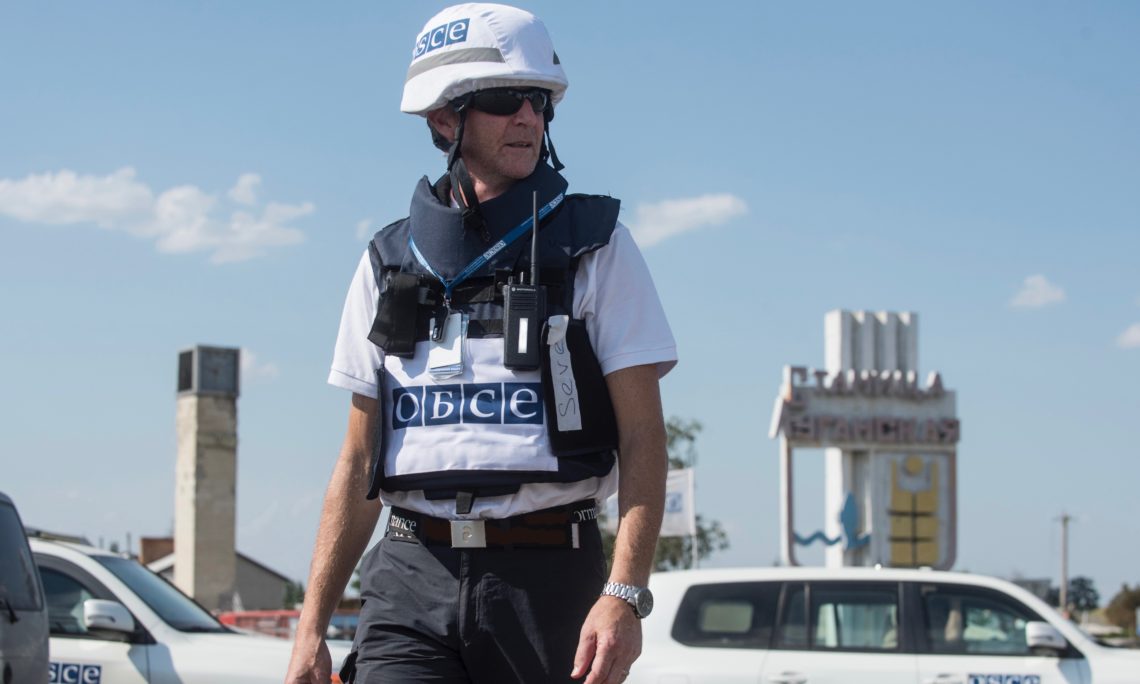 Ambassadors Cevik and Sajdik, we are pleased to welcome you to the Permanent Council.

Ambassador Sajdik, the United States welcomes the progress made at the Stanytsia Luhanska disengagement area. We too encourage the sides to build on this momentum by recommitting to full disengagement at the other designated areas near Zolote and Petrivske, where we have observed some backsliding.

Despite the achievements at the Stanytsia Luhanksa disengagement area, the conflict, which Russia started over five years ago, continues. Eighty-seven Ukrainian soldiers were killed or wounded in June in the conflict with Russia-led forces – the highest figure in several months. We were saddened to learn that a Ukrainian military medic and her driver were killed July 1 near the line of contact. Russia must do its part to end this intensifying violence.

The way to end the conflict is through implementation of the Minsk agreements. A lasting ceasefire depends on Russia’s withdrawing heavy weapons, removing its forces, and disarming the proxy forces it leads in eastern Ukraine. The United States would welcome concrete steps from Russia and the forces it arms, trains, leads, and fights alongside towards establishing a lasting ceasefire throughout the conflict zone. I believe everyone in this room would welcome additional steps by Russia in line with Minsk, including the cantonment of proscribed weapons, exchange of detainees, streamlined procedures to cross the line of contact, and disbandment of political and military entities not covered by Ukraine’s constitution in areas controlled by Russia-led forces.

Meanwhile, on June 28 and 29 shrapnel from indirect fire damaged important water infrastructure along the Siverskyi Donets-Donbas channel, which provides water to over three million people on both sides of the contact line. We encourage the Trilateral Contact Group to devote special attention to developing no-fire areas around systems providing water and electricity to prevent humanitarian disasters. The complex nature of the humanitarian and environmental consequences of this conflict demands a multi-faceted response.

This week, a group of SMM environmental focal points participated in a training course to strengthen the mission’s preparedness to respond to environmental emergencies. Given the impact of the conflict on environmental conditions in Ukraine, including to critical water resources, we welcome this important initiative to enhance the Mission’s capacity to increase focused reporting on the environmental situation on the ground.

Ambassador Cevik, we welcome you to the Council for your first address. The United States views your monitors’ work as a critical piece of the Minsk process. You can count on our support. We welcome your commitment to strengthen the operations, planning, and security of the mission. The SMM operates in conditions unlike any of the organization’s other field missions. We urge the Secretariat to adopt special administrative procedures for the SMM in areas to streamline recruitment and procurement.

Your report notes that 92 percent of access restrictions to SMM patrols over the past three months occurred in areas controlled by Russia-led forces. The United States reminds Russia that the SMM’s mandate calls for access throughout Ukraine – restrictions and other forms of interference are unacceptable. Your report notes that in the last three months, the SMM has lost one long-range, one mid-range, and 11 mini-UAVs due to hostile action, despite the commitment by the signers of the Minsk agreements authorizing the Mission to use all technical equipment necessary for operations, including UAVs.

Ambassador Cevik, we welcome the SMM’s regular and thematic reporting. A special or thematic report on the social and economic consequences of Russia’s obstruction of lawful commercial shipping in the Sea of Azov and the Kerch Strait would be very informative for this Council.

Russia must immediately return all 24 Ukrainian crew members and three vessels captured during the Kerch Attack. We all know there is no reason for Russia to continue to hold these individuals.

Madam Chair, we are deeply concerned about the health of Ukrainian citizen Volodymyr Balukh. Balukh was imprisoned by Russian occupation forces in Crimea for flying a Ukrainian flag. On June 25 he began a hunger strike to protest Russian authorities’ false assertions that he is a Russian citizen in order to deny him access to the Ukrainian consul, who has repeatedly sought to visit him. We are also concerned about the fates of Oleg Sentsov and Oleksandr Kolchenko, who have been unjustly imprisoned for over five years. We urge Russia to release Sentsov, Kolchenko, Balukh, and all other Ukrainians who are languishing unjustly in prisons in Russia and Russian-occupied Crimea for opposing Russian aggression against Ukraine and its occupation of Crimea.