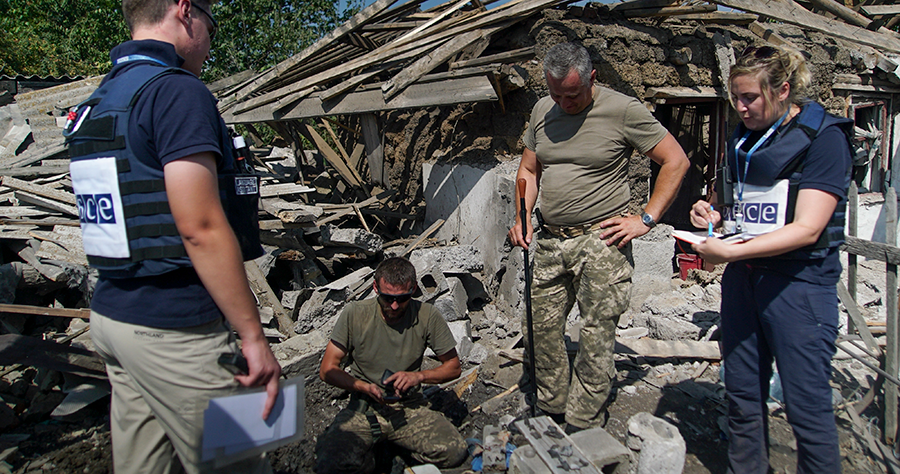 As delivered by Chargé d’Affaires Gregory Macris
to the Permanent Council, Vienna
July 25, 2019

The United States welcomes Ambassador Sajdik’s July 18 announcement of the recommitment by members of the Trilateral Contact Group (TCG) to the negotiated ceasefire. We strongly urge Russia and the forces it arms, trains, leads, and fights alongside to adhere to the latest commitment, which brings us closer to a lasting and sustainable ceasefire.

We are pleased to see the TCG approved a plan to commence long-overdue repairs to the Stanytsia Luhanska Bridge. Repairing this bridge will improve the lives of thousands of local civilians who rely on it to complete everyday tasks. We were also pleased that there was an eight-hour period of zero ceasefire violations starting at noon on Election Day.

Despite these positive developments, the last week saw a spate of civilian casualties. Four people were killed and nine other civilians, including a child, were injured by gunfire, shrapnel, and mines. For five years Russia has fomented the conflict in eastern Ukraine and – as a result – the civilian population continues to suffer daily hardships. Their loved ones have been injured, maimed, or killed; their homes have been damaged or destroyed; and their everyday lives have been rendered almost unrecognizable. Only a lasting and sustainable ceasefire can end the suffering in eastern Ukraine.

Russia must withdraw its heavy weapons, remove its own forces, and disarm its proxy forces in eastern Ukraine in order to end this disastrous conflict. A lasting and sustainable ceasefire can only succeed when Russia stops the violence and abides by its commitments under the Minsk agreements.

Yet, Russia continues to ignore these commitments and other international norms. It holds captive the 24 Ukrainian crewmembers and three vessels it seized near the Kerch Strait in November 2018. Today marks eight months of captivity for the crewmembers, separated from their families and detained in Russian prisons, and Moscow has extended the detention of the sailors for another three months. We again call on Russia to immediately release these detainees and permit them to return home to their families.

We also call for the release of the over 100 other individuals from Crimea and elsewhere in Ukraine whom Russia has unjustly imprisoned in retaliation for their political views – people like filmmaker Oleh Sentsov, farmer Volodymyr Balukh , human rights defender Emir-Usein Kuku, journalist Roman Sushchenko, Crimean Tatar activist Edem Bekirov, blogger Nariman Memedeminov, and many, many others. We renew our calls for Russia to allow independent doctors to examine Balukh and Bekirov, as troubling reports of their deteriorating health continue to emerge each week.

Russia’s brutal abuses continue in Crimea, where Russian occupying authorities intimidate, harass, and detain Crimean Tatars, ethnic Ukrainians, and others who dare oppose Russia’s occupation. We are troubled by the news this week that police in Crimea have been calling in for interrogation those who traveled to Moscow earlier this month to peacefully protest the widespread and wrongful prosecution of Crimean Tatars on so-called “terrorism” grounds. We call on Russia to cease these intimidation tactics and other forms of pressure on individuals expressing criticism of the occupation.