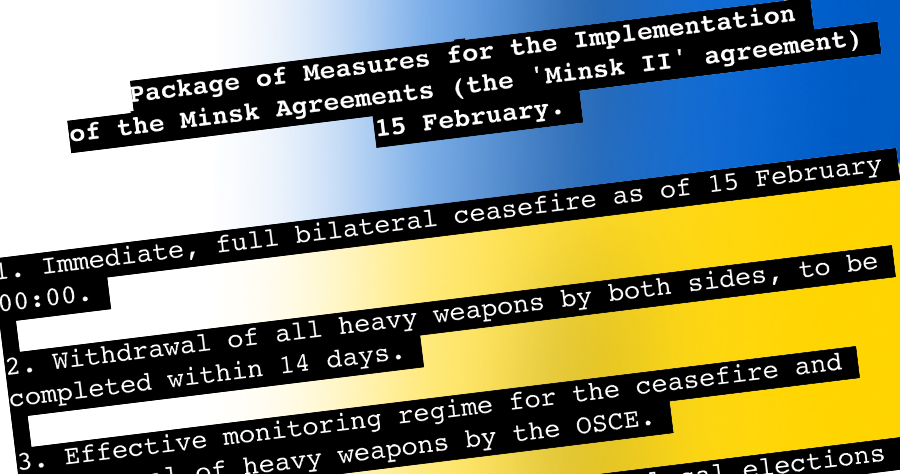 The tenuous “harvest ceasefire,” the 40th such recommitment to observe a true ceasefire in the nearly three years since the signing of the Minsk Protocol, has come under dangerous strain this past week. The Special Monitoring Mission (SMM) to Ukraine recorded a 25 percent increase in ceasefire violations, and more than a threefold increase in the use of Minsk-proscribed weapons from the week before. We were saddened to learn that artillery and mortar fire resumed near Svitlodarsk for the first time in over two weeks.

Nonetheless, there were some bright spots in the SMM reports. In Horlivka, for example, ceasefire violations fell for the third consecutive week – by 90 percent over the past seven days – and violations fell by 70 percent outside of Mariupol. These gains must be protected and built upon, or they will quickly unravel, just as was the case in each prior ceasefire attempt. All sides must uphold their commitments to withdraw troops and heavy weaponry from the line of contact, and to halt exchanges of fire.

Maintaining the ceasefire is critical for people living in areas affected by this Russia-fueled conflict. The SMM’s reports provide a tragic reminder of the impact of years of unabated violence, including 2,800 civilians who have died. Over the past week, at least four more civilians were killed or wounded by explosions or shelling. We remind all forces of the need to minimize the risk of harm to civilians.  We are deeply concerned that, once again, the SMM found evidence of shelling near the power plant in government-controlled Schastia. We also note that Avdiivka-Yasynuvata remains a hotspot, despite the presence of the Donetsk Water Filtration Station, on which over 345,000 people depend for drinking water. Many towns and villages are already experiencing severe water shortages, and a direct hit on the facilities could trigger a grave crisis.

A genuine and lasting ceasefire, followed by the withdrawal of proscribed weapons, is required before work can proceed on the political aspects of the Minsk agreements. Russia is stoking this conflict, and so we, along with others, call on Russia and the forces it arms, trains, leads, and fights alongside, to take the first steps to improve security conditions on the ground and end this crisis.

The SMM must have full, safe, and unhindered access throughout the entire territory of Ukraine, including the full length of the border between Ukraine and Russia, in accordance with its mandate.  Five weeks ago, parties to the conflict should have provided the SMM with a map of mines and unexploded ordnance in the conflict area. And last week, the SMM should have received a notice of a plan to fence or clear those hazards. This has not occurred, and the SMM’s patrols remain severely limited as a result of this inaction.

Worse, the SMM continues to face serious restrictions, violence, and harassment in territory controlled by the forces Russia arms, trains, leads and fights alongside. In Vesela Hora, two representatives of the so-called “Luhansk People’s Republic” threatened to fire upon SMM patrol members for allegedly mentioning a commemoration of Ukraine’s national day. Elsewhere, in Donetsk City, Russia’s proxies withdrew security guards from an SMM office for an entire week. On July 8, an armed man at a checkpoint in non-government controlled Donetsk pointed a rifle at an SMM patrol and demanded that the patrol halt. These incidents are completely unacceptable.  Russia must put an end to such behavior without delay. Russia’s sentiments regarding SMM safety at the last Annual Security Review Conference were helpful; now they need to be translated into action.

Ukraine must also ensure its forces fully protect the SMM and its assets, and make certain that its forces do not fire at the SMM’s UAVs. This past week, a Ukrainian Armed Forces soldier admitted he accidentally shot at an SMM mini-UAV. That said, Ukrainian soldiers have never shot directly at SMM monitors, a stark contrast to the forces Russia arms, trains, leads, and fights alongside. Restrictions on the SMM again call into question just how genuine Russia’s words of support to the SMM and the Minsk agreements truly are.

The United States remains deeply disturbed by the escalating violence in the Donbas, and continues to fully support Ukraine’s sovereignty, independence, and territorial integrity within its internationally-recognized borders. We do not now, nor will we ever, recognize Russia’s purported annexation of Crimea.  We are deeply troubled by Russia’s continued attempts to integrate this Ukrainian territory into its civilian and military infrastructure, including the announcement this week by Ukrainian officials that Russia has more than doubled the number of its military troops and increased fivefold the number of its weapons on the peninsula since the occupation began.

Disturbing reports of human rights abuses continue to emerge from Crimea. We are closely following the ongoing show trials of imprisoned journalist Mykola Semena, and Tatar leaders Akhtem Chiygoz and Ilmi Umerov. We note a July 5 report from the Crimea Human Rights Group detailing a worsening of the crackdown on religious freedom on the peninsula, including court judgments against Jehovah’s Witnesses, Seventh Day Adventists, and other Christian minorities, as well as several Muslims, for conducting missionary activity.

We again call on the Russian Federation to immediately release Oleg Sentsov today on his birthday — as well as all other remaining hostages and political prisoners — as it committed to do in signing the Minsk agreements.

As Secretary Tillerson reiterated recently, our eastern Ukraine-related sanctions on Russia will remain until Moscow fully implements the Minsk agreements. We join our European and other partners in affirming that our separate, Crimea-related sanctions will remain in place until Russia returns full control of the peninsula to Ukraine.