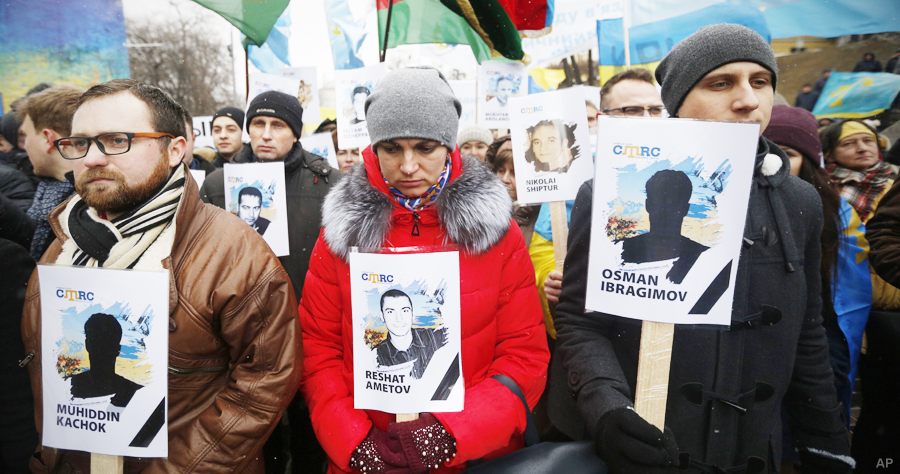 Ukrainian and Crimean Tatar activists hold portraits with the names of victims of the Russia's attempted annexation of Crimea during a rally in Kiev, Ukraine, Sunday, February 26, 2017. (AP Photo/Sergei Chuzavkov)

The “Back to School” ceasefire in eastern Ukraine, entering its eighth week, has brought a sustained reduction in violence. It is an encouraging demonstration that shelling can be dialed down and the necessary steps taken to ensure that security is established, as called for in the Minsk agreements.

We welcome Ukraine’s October 6 extension of the Special Status Law and view its passage as another example of Kyiv’s commitment to a lasting and peaceful resolution in eastern Ukraine. But this law cannot be implemented without reliable and sustainable security for all those living in the Donbas region on both sides of the Line of Contact. We call on Russia to use its leverage with the forces it trains, equips, leads, and fights alongside to disengage from the line of contact, to take steps to withdraw from disengagement areas, and to withdraw and store its proscribed weapons in accordance with its Minsk commitments.

The United States remains concerned about the persistent deployment of heavy weapons by Russia-led forces in the security zone, the increasing presence of explosive remnants of war, and the lack of follow through on mine action commitments by both sides. Non-combatants in Ukraine bear the brunt of the hostilities. Violence has decreased, but casualties continue to mount.  Earlier this week, the SMM reported that a 16-year-old boy was badly injured when a grenade he had found exploded. On October 6, the SMM reported that a civilian employee of a power company, along with two so-called “DPR” militants, were killed by an anti-personnel mine near Betmanove. We call on both sides to follow through on their commitments to mine action, which would significantly reduce the risks these weapons pose to civilians and SMM monitors alike.

Mr. Chair, continued restrictions on SMM access and interference with their equipment are unacceptable. On October 5, so-called “DPR” militants stopped an SMM patrol near Siedove and denied the patrols access to the village. On October 6, the SMM reported the disabling of its camera in the militant-controlled area south of Stanytsia Luhanska by a beam of light assessed to be emanating from a so-called “LPR” position where an “LPR” militant had just been observed installing and adjusting a laser. The SMM also reported last week that a “DPR” militant prevented the SMM from flying a mini UAV near Yasynuvata. Although the SMM informed the JCCC in advance of its intentions, the militant made clear he had orders not to allow the SMM to fly its UAV in the area, and to fire at any UAVs he saw.

Mr. Chair, obstructions to SMM patrols are categorically unacceptable. We call on Russia to order the forces it trains, equips, leads, and fights alongside to cease their interference with SMM patrols. A fully-functioning monitoring mission is critical for peace in the Donbas.

Fulfilling the SMM’s mandate also requires the Mission be given full and unrestricted access to all of Ukraine. This includes the area along the border with Russia, to which the SMM has been allowed only limited access. This also includes Crimea, which remains an integral part of Ukraine. We reiterate our deep concerns about the large numbers of Crimeans imprisoned for nothing more than their opposition to Russia’s occupation, and we call on Russia to immediately release all Crimeans imprisoned on baseless political pretexts.

Mr. Chair, the United States fully supports Ukraine’s sovereignty, independence, and territorial integrity within its internationally-recognized borders. We do not, nor will we ever, recognize Russia’s purported annexation of Crimea. Crimea-related sanctions on Russia will remain in place until Russia returns full control of the peninsula to Ukraine. We join our European and other partners in restating that our sanctions against Russia for its aggression in eastern Ukraine will remain until Russia fully implements its commitments under the Minsk agreements.