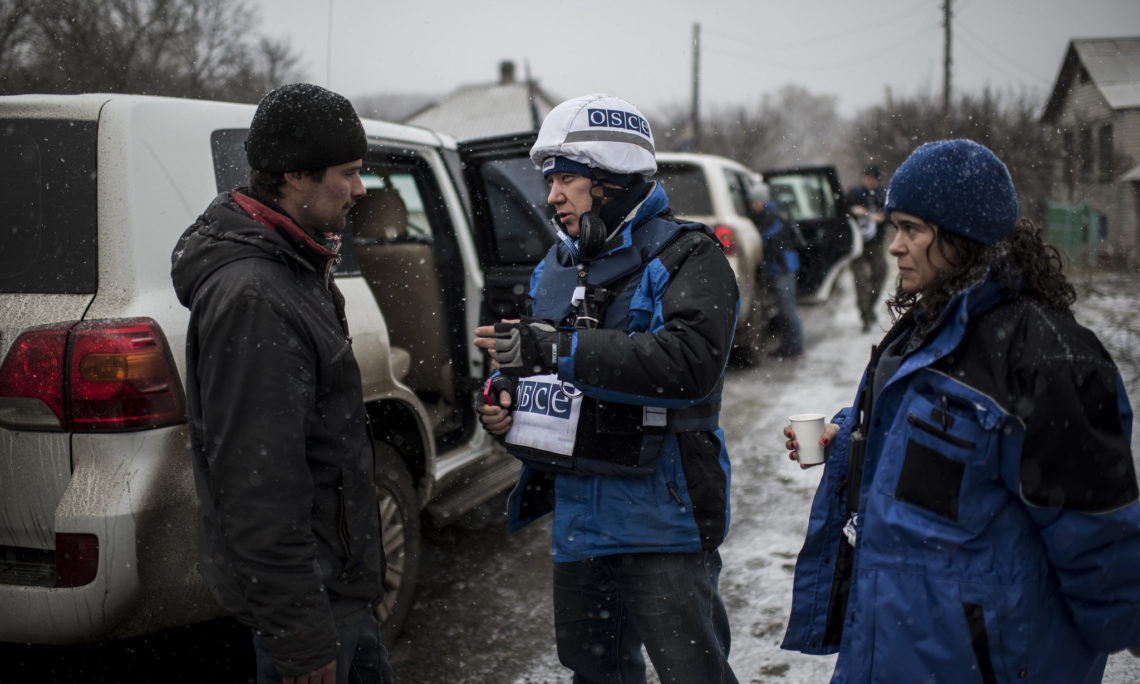 The United States calls for an immediate de-escalation of hostilities along the line of contact in eastern Ukraine. Violence is now at the highest level since the September 1 ceasefire. The OSCE Special Monitoring Mission to Ukraine (SMM) recorded over 4,000 ceasefire violations on April 14 alone, with over 500 of these involving proscribed heavy weapons. According to the April 13 SMM report, combined Russian-separatist forces deployed 57 armored personnel carriers in separatist-held Donetsk. This level of violence and military activity threatens the Minsk agreements and must stop.

SMM reports also reveal the toll the fighting has taken on the lives of civilians, how landmines and unexploded ordinance have spread, and how constant attacks by Russian-separatist forces have forced Ukraine to close crossing points at the line of contact in order to protect civilians from shelling. Just this week, SMM reports indicated attacks carried out by combined Russian-separatist forces against the Ukrainian government side of the crossing point at Stanytsia Luhanska – the only crossing point civilians can use in Luhansk oblast. Amidst these worsening conditions, combined Russian-separatist forces maintain restrictions on international aid organizations, which prevent much needed food, medicine, and other humanitarian goods from reaching people in need. We call for an end to restrictions on humanitarian activities in separatist-controlled territory.

We also call for renewed efforts to forge an agreement on disengagement on the contact line, including enhanced SMM monitoring of hotspots, verified heavy weapons withdrawal, and other confidence building measures. Each of these steps requires Russia and the separatists to grant the SMM full and unfettered access throughout Donetsk and Luhansk oblasts, including up to the international border between Ukraine and Russia. In addition, they must live up to their commitment under the Minsk agreements to guarantee the safety and security of the monitors. We note with great concern the recent incidents in which monitors’ vehicles were fired upon and one monitor was threatened by separatist forces. These threats continue with impunity. On April 18, a member of the so called “DPR” threatened to fire on SMM monitors if they were seen again in the company of Ukrainian soldiers. That same day, a member of the “LPR” threatened to detain monitors. Obstructing, threatening, and attacking SMM monitors and jamming its UAVs is a violation of the Minsk agreements and in contravention of the SMM’s mandate. If the Russian Federation truly supports disengagement and de-escalation, it must compel the separatists to ensure they fully uphold their commitment to provide secure and unhindered access throughout the entire territory of Ukraine, as stipulated in the Minsk agreements.

Building transparency in the conflict zone depends upon both technical means and political will. The SMM must have the means to monitor the security zone as thoroughly as possible. It is not enough for the mission to count ceasefire violations; it must be able to attribute responsibility for them – enabling both accountability for attacks and work to avoid future violations. Two new static video cameras the SMM has placed in Donetsk are a step in the right direction. We urge the mission to move swiftly to employ other forms of surveillance technology throughout the conflict area, and to shore up its information management capability to make full use of the data collected.

Free and fair local elections –consistent with OSCE standards, held under Ukrainian law, and with ODIHR observation– in certain areas of Donetsk and Luhansk must follow a durable ceasefire. It is impossible for Ukraine to pass an electoral law when Ukrainian soldiers and civilians are injured or killed by the ongoing violence in eastern Ukraine. Furthermore, SMM reporting has highlighted the disappearance of NGO activists and journalists, and a general climate of fear of expressing any anti-separatist sentiment in areas under separatist control. A meaningful international security presence will be indispensable to holding free and fair elections in these areas, and OSCE participating States should be prepared to support the establishment of such a mission.

Let me turn now to Crimea, where the Russian Federation’s occupying authorities continue to perpetrate serious abuses against the residents of this region of Ukraine who oppose the occupation. We strongly condemn this week’s detention of journalists and raids on at least five offices of media outlets in Crimea by Russia’s security service. We understand at least one journalist was detained for allegedly speaking out against Russia’s occupation and attempted annexation of this Ukrainian territory. We call for the immediate release of these journalists and a halt to raids on media organizations. We also took note of the OSCE Representative on Freedom of the Media’s statement that highlighted how this crackdown is inconsistent with OSCE commitments.

We are deeply disturbed by reports that de facto authorities have ordered a suspension of the Mejlis Council, the body representing the region’s Crimean Tatar ethnic minority, and are seeking to ban the council outright after Russia’s Ministry of Justice determined the Mejlis is a so-called “extremist organization.” The Mejlis is now banned from operating in Crimea and is prohibited from convening, publishing its views in mass media, and holding public events. It appears that Russian authorities have failed in their attempts to sway or cajole the Mejlis to accept the Russian occupation, and are now determined to break the Mejlis entirely.

We call upon Russia to respect the freedom of speech and other basic human rights in occupied Crimea. The United States will maintain its economic sanctions on Russia related to Crimea until it ends its occupation of Crimea, and we join the EU in reminding Russia that the process of lifting sanctions against Russia can only begin after full implementation of the Minsk agreements.