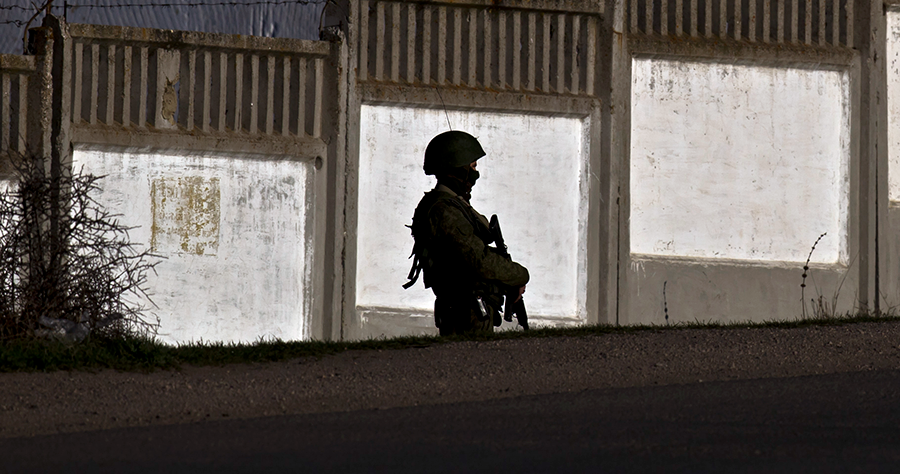 A pro-Russian soldier guards the perimeter where pro-Russian troops are stationed outside an Ukrainian military base in Perevalne, Ukraine, Saturday, March 15, 2014. (AP Photo)

In November 2013, the Ukrainian people rejected an attempt by President Yanukovych to weaken ties with Europe. More than a hundred Ukrainians perished in the ensuing weeks as security forces—operating under the direction of the Yanukovych government—beat and fired on peaceful protesters. In February 2014, Yanukovych abandoned his post and fled to Russia.

They seized key facilities in Crimea and by early March had taken control of the peninsula. Russia’s next move was to organize a sham “referendum” in Crimea—where voters cast their ballots in violation of Ukraine’s constitution, in the presence of an armed occupation force, and without any credible international observers.

Madam Chair, Russia’s occupation of Crimea has now entered its seventh year. Moscow’s militarization of the peninsula undermines our common security and is an integral part of its multi-year aggression against its sovereign neighbor, Ukraine. In December 2019, the United Nations General Assembly adopted a resolution condemning Russia’s militarization and subsequent destabilization of Crimea via the transfer of weapons and other materiél, including nuclear-capable aircraft and missiles, ammunition, and military personnel.

In conjunction with the conflict in Donbas, Russia’s actions in Crimea are part of the Kremlin’s broader campaign to destabilize Ukraine in a counterproductive attempt by Russia to divide Ukrainians and deny their trans-Atlantic aspirations.

Over the past six years, we have seen Crimean Tatars, ethnic Ukrainians, and others who peacefully oppose the occupation charged with crimes, including those related to terrorism, and jailed. UN monitors have documented over 140 raids on Crimean Tatar homes and businesses since 2017 alone. At least 60 of the more than 80 Ukrainian political prisoners still held by Russia are Crimean Tatars serving up to 20 years in prison on charges widely acknowledged to be baseless. We call for the release of these political prisoners and for their safe return to their homes and families.

Crimea is now among the most restrictive environments in the world for press freedom. Before the occupation, there were over 3,000 media outlets in Crimea; fewer than 250 were licensed to operate under the occupation. Russian authorities have closed independent news outlets and blocked access to independent internet sites.
Most independent journalists have been forced to flee; the few remaining now work underground and publish under pseudonyms at great personal risk.

Nearly 20,000 Ukrainian citizens in Crimea have been conscripted into the ranks of the army of the occupying power—Russia. Before the occupation there were 46 Ukrainian Orthodox parishes in Crimea; now all but seven of the 46 have been closed by occupation authorities, and those remaining are under threat. Russia’s invasion and purported annexation of Crimea contravenes a bedrock principle of international law reflected in the United Nations Charter and the Helsinki Final Act, that nations must not seek to change borders by force.

Russian provocations in the Black Sea region, including the Kerch Strait and the Sea of Azov, escalated tensions in international waters, culminating in the November 2018 capture of three Ukrainian vessels and 24 servicemembers.

We understand that an arbitral tribunal has recently ruled on jurisdictional issues in Ukraine’s claims against Russia under the Law of Sea Convention and that aspects of Ukraine’s claims will now be heard on their merits. We welcome Ukraine’s ongoing efforts to hold Russia accountable for violation of its international obligations and commitments.

We also recall the May 19 ruling by the International Tribunal for the Law of the Sea ordered the release of the three naval vessels and 24 servicemembers Russia had detained. And the United States welcomed the eventual return of the servicemembers to their families in September 2019, following nearly a year of detention.

Six years of occupation is six years too many. As Secretary Pompeo stated in the Crimea Declaration of July 2018, during his January visit to Kyiv and, most recently, yesterday, the United States will never recognize Russia’s claims of sovereignty over territory seized by force in contravention of international law.

In conjunction with our Allies, partners, and the wider international community, the United States rejects Russia’s attempted annexation of Crimea and pledges to maintain this policy until Ukraine’s territorial integrity is fully restored.