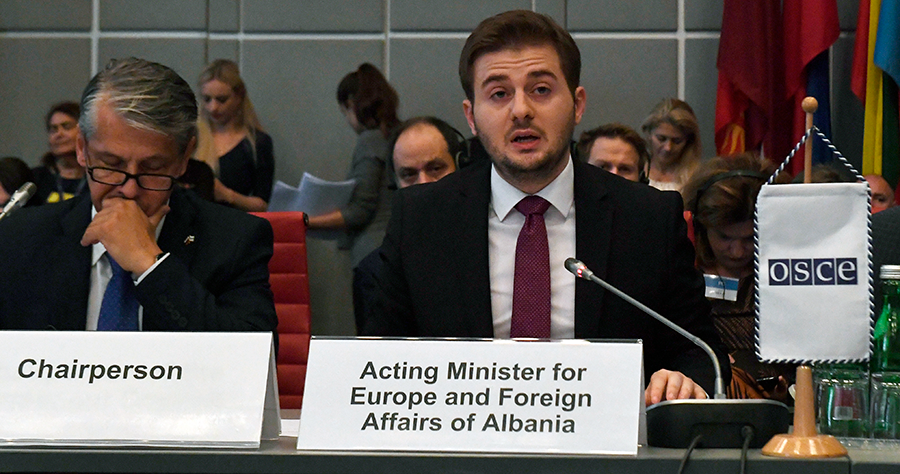 The Acting Foreign Minister of Albania, Gent Cakaj, outlines the priorities of his country's upcoming chairmanship of the OSCE to the Permanent Council on July 11, 2019. (USOSCE/Gower)

The United States welcomes the emphasis that you’ve placed on implementing our shared commitments in all three dimensions of security. Because Russia has not upheld its Helsinki Final Act and other OSCE commitments, the OSCE region is facing its greatest security challenge since the 1990s. Responding to Russia’s actions should remain the top priority of the OSCE.

Russia’s actions and lack of actions perpetuate the other protracted conflicts. It fails to abide by the 2008 ceasefire agreement with Georgia and the 1999 Istanbul Summit commitments regarding Georgia and Moldova. We look forward to working with Albania as Chair-in-Office to promote peaceful, negotiated settlements to conflicts in the region. We value the efforts of the 5+2 Transnistria settlement negotiations, the Minsk Group, and the Geneva International Discussions in promoting transparency and understanding of conflict situations on the ground.

During the recent Annual Security Review Conference, many participating States expressed the desire for increased cooperation to address hybrid warfare, cybersecurity threats, and the new challenges presented by emerging technologies. Although many of these security concerns are not susceptible to traditional arms control solutions, a modernized Vienna Document would help with the lack of transparency. We support the initiative to update the Vienna Document as a way to restore confidence to the region through enhancing military transparency to prevent the risk of military incidents.

The OSCE’s geographical reach and comprehensive approach to security add unique value in the global effort to counter violent extremism. I applaud your comments in your statement that you will promote re-enforced efforts on countering violent extremism and radicalization that leads to terrorism, paying attention to the issue of returning foreign terrorist fighters, and we support your efforts in this regard. Everyone here is aware of America’s commitment on the issue of anti-terrorism.

We welcome your intention to focus on combating corruption and advancing accountable governance. Corruption erodes the rule of law, undermines the public’s faith in government, and prevents citizens from having an equal opportunity to participate in the society, economy, and government of their country. It creates openings for malign actors to weaken those societies and to stir up divisions within the OSCE community.

The United States is concerned about some participating States’ increasing repression of individuals for exercising their fundamental freedoms of expression, peaceful assembly, association, and religion or belief. The space for civil society and independent media is shrinking in many participating States, and human rights defenders and journalists are attacked with impunity. The United States opposes attempts to unduly restrict civil society access to and participation in the Human Dimension Implementation Meeting or other OSCE fora.

The United States looks forward to working with the Albanian Chairmanship on these ongoing security challenges in all three dimensions, to promote a successful Chairmanship in 2020. We thank you, Mr. Minister, for your country’s willingness to take on this weighty task, and you may be assured through our acquaintance and beyond of our support of the United States for your chairmanship