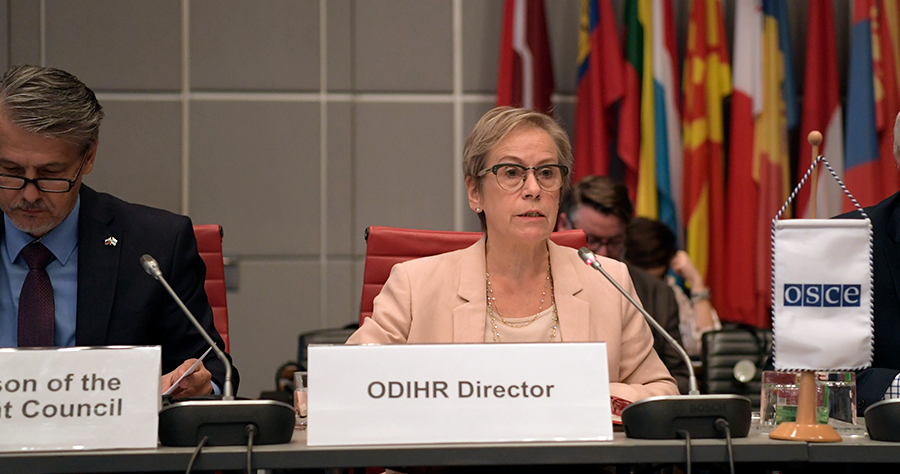 Director Gísladóttir, the United States welcomes you to the Permanent Council, and thanks you for your report and for organizing the 2019 Human Dimension Implementation Meeting in Warsaw this past month.  HDIM remains the region’s premier platform for defending and advancing human rights and fundamental freedoms, and it is unique in providing civil society the opportunity to engage directly with governments.  We thank Poland very much for hosting ODIHR and HDIM, and the Slovak Chairmanship for its support.

We agree with you that the 2019 HDIM demonstrated that the meeting remains an important platform for dialogue; it had record-breaking participation and over 100 side events.

Formal working sessions included vibrant interventions from a wide range of organizations and activists.  Delegates from OSCE participating States and institutions, and civil society discussed and debated the full range of human dimension commitments.  Almost every session was oversubscribed. Although that meant shorter speaking times, we were able to hear a wide variety of viewpoints, and so we congratulate you on the success of the meeting.

Unfortunately, once again we saw that, rather than using HDIM as an occasion for genuine dialogue, some participating States attempted to push their political agendas via government-organized NGOs, also known as GONGOs, as was discussed by my colleague from Canada.  These groups are laughably easy to spot and fool nobody. In fact, they often draw attention to the very problems that governments are trying to hide.  In that sense, they are counter-productive to the intentions of their backers, but GONGOs do take up valuable time that could be used by independent NGOs, which is the intention of the meeting.  We call upon participating States to cease the use of those kinds of organizations. The United States’ position is that free expression should be protected and full participation should be allowed, but that should not be used as a weapon to crowd out the voices of genuine civic organizations by those who have political agendas that have nothing to do with human rights and are, in fact, against human rights.

Over the two weeks of HDIM, there were some recurring themes:  the United States and other participating States will–despite the GONGO statements that tried to legitimate the illegal occupation of Crimea–maintain sanctions against Russia until Moscow fully implements its Minsk commitments and returns full control of the Crimean peninsula to Ukraine; support for Ukraine’s and Georgia’s sovereignty and territorial integrity remains unwavering; and we are concerned about Russia’s repression, with impunity in cases of threats and violence against human rights defenders, journalists, environmental activists, political rivals, members of ethnic and religious minorities, and those who do not conform to so-called “traditional values.”  Nowhere in the Russian Federation is impunity more evident than in the Republic of Chechnya, where serious human rights abuses prompted more than a dozen participating States last year to invoke the Moscow Mechanism to investigate such evil conduct.

Surveying other issues raised at HDIM, we call on participating States to release all political prisoners.  Participating States also should ensure that persons deprived of their liberty are humanely treated and accounted for.  I, myself, was present for most of the sessions over both weeks, and some of the statements made by people who were reporting to HDIM were alarming.

We again ask Turkmenistan to provide concrete information on or access to those who have disappeared into the country’s prisons, including our former colleague Batyr Berdiev.  Director Gisladottir, we agree with your statement at the closing session of HDIM that it is unacceptable for countries to intimidate, harass, threaten, or arrest civil society activists and their family members simply for seeking to exercise their right to freedom of expression by attending HDIM.

We are following closely individual cases of harassment and will raise them at the Permanent Council and bilaterally, if necessary.  This type of behavior is not congruent with mature governance nor the democratic values that all here have committed to uphold. We call on all participating States to ensure human rights defenders and NGO representatives are able to travel to HDIM, without fear of reprisals against them and their family members.

Director, you talked in your opening statement about the retarding of the right of assembly and the deterioration of democratic institutions, and you noted a grim picture of intimidation. We note the positive role that NGOs play in civil society, and the role that they play in furthering liberty in the world today, which is the foundation of the OSCE.

We commend the Slovak Chairmanship for its reasoned and considered approach to this issue, while still respecting the consensus-based structure of  the organization and our foundational beliefs in the structure of liberty.

Director, we believe that we need to raise with you today an issue that warrants a more public discussion, and that is the deletion of the archives of HDIM statements from the ODIHR website.  Though we understand ODIHR still would provide access to statements if individuals request them, this is a barrier to the information that is produced at the HDIM meetings. To remove the records would only serve the narrow interests of those who would prefer to keep all this out of sight, and render the meeting itself pointless as the statements are no longer available for easy access. I understood that the statements from this year’s HDIM would be maintained, but now I understand that even they are now being pulled down. We need clarification on this, but it is the United States position that the statements should be available to people, and should not be pulled down. The assertion that people do not look at these is immaterial. Instead,of pulling down things that people do not look at – we should be encouraging more people to look at them.

We continue to object to content-based restrictions in ODIHR’s Code of Conduct. While the moderators were restrained in implementing them at this year’s HDIM, we believe the content-based prohibitions – in other words objecting to people’s statements based on their substance – are inappropriate and should not be employed by ODIHR in their meetings. Arguments should be challenged, not prohibited. We share your concern that some participating States called specious points of order in order to interrupt speakers.

Finally, as others today have said, we commend ODIHR for listening to participating States and significantly reducing the number of introductory speakers. While there was more time for discussion, we ask you to consider further limiting the speaking time for the introducers, or even eliminating them altogether. Experts could instead serve as speakers at side events.

Once again, we thank you very much. The United States thanks Director Gísladóttir and her team for all their efforts, for hosting this event, which I can assure you I enjoyed very much with my extensive participation.