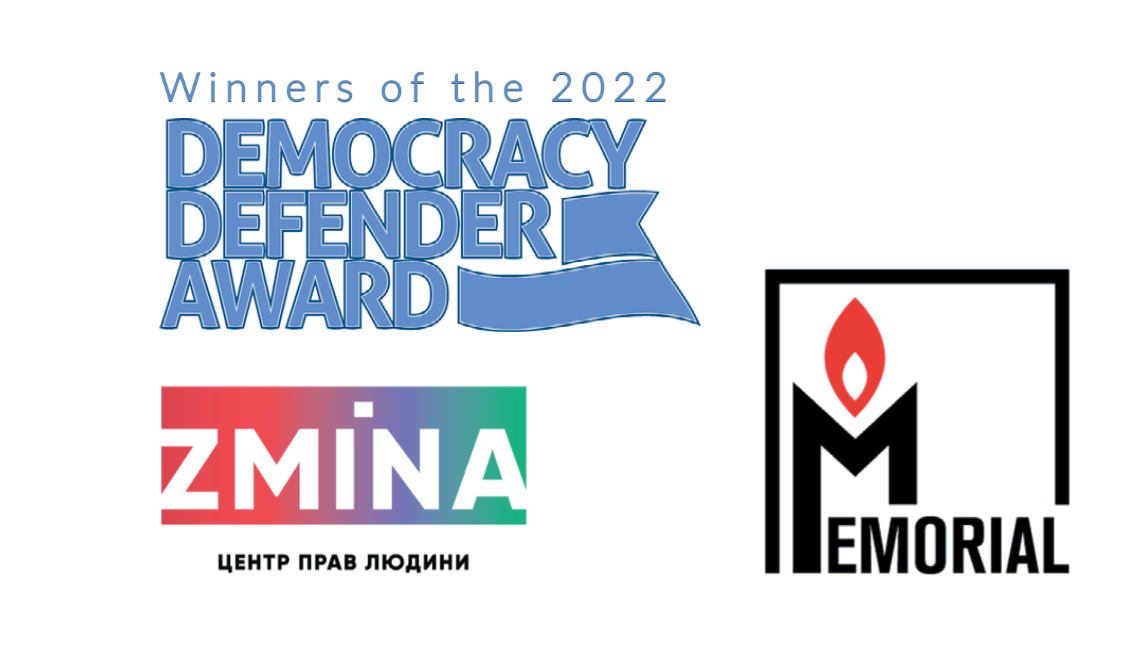 This year two organizations will receive the Democracy Defender Award.

Joint Statement on the Democracy Defender Award Presentation and Seminar

On behalf of the delegations of Canada, Denmark, Montenegro, the Netherlands, Sweden, the United Kingdom, the United States of America and Switzerland, I would like to inform the Permanent Council of the winners of the 2022 Democracy Defender Award. Due to Russia’s ongoing military aggression against Ukraine and the connected increase in repression against Russian civil society, the members of the Democracy Defender Initiative have taken the extraordinary step of choosing two winners for this year’s award. We are happy to announce that a Ukrainian and a Russian civil society organization are the two recipients of the 2022 Democracy Defender Award, the “Human Rights Centre ZMINA” (ZMINA) and the Memorial Human Rights Centre.

The Democracy Defender Award was established in 2016 and honors a person or group for exceptional contributions to the promotion of democracy and the defense of human rights in the spirit of the Helsinki Final Act and other OSCE principles and commitments. We are convinced that respect for human rights is a central element of conflict prevention. It strengthens democratic institutions and political plurality and, consequently, rationality in decision-making processes. We are currently witnessing what the consequences of shrinking space for civil society and restrictions on fundamental freedoms and human rights can be. It is incumbent upon us as OSCE governments to reverse this troubling trend, and to ensure that civil society is able to thrive. The OSCE Secretariat bears no responsibility for the content of this document and circulates it without altering its content. The distribution by OSCE Conference Services of this document is without prejudice to OSCE decisions, as set out in documents agreed by OSCE participating States.

Mr. Chair, ZMINA receives the award this year for its outstanding contribution in promoting and protecting fundamental freedoms and human rights in both non-government and government-controlled territories in Ukraine. Since its founding in 2013, ZMINA has been engaged in informational, educational, monitoring, analytical and advocacy activities in a wide spectrum of issues ranging from freedom of speech, assembly and association to combating impunity and protecting human rights defenders and civic activists. In the wake of Russia’s military aggression on 24 February 2022, ZMINA has launched, together with 15 other Ukrainian human rights organizations, the Ukraine 5 AM Coalition, which is collecting and organizing information on potential war crimes and crimes against humanity and offers legal assistance to victims.

I would like to take this opportunity to invite participating States and representatives of OSCE institutions to join us at this year’s Democracy Defender Award Presentation and Seminar, which will take place on Wednesday, May 4th, at Schwedenhaus.