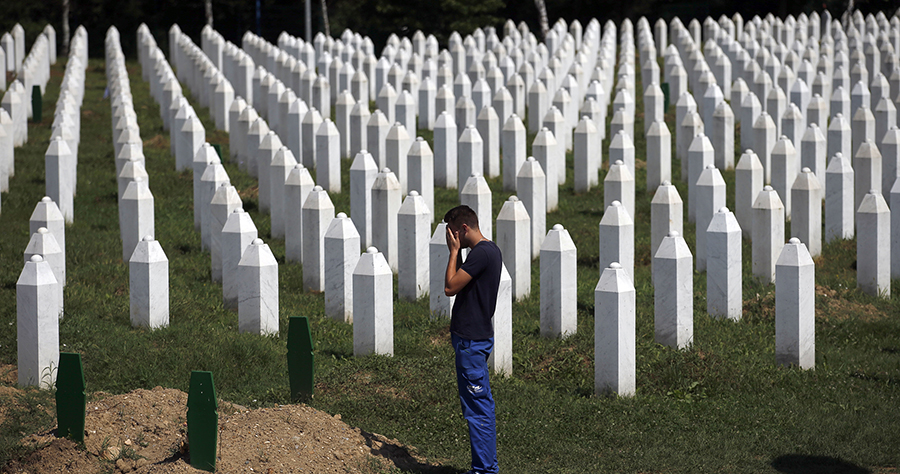 A man prays among gravestones at the memorial centre of Potocari near Srebrenica, Bosnia and Herzegovina. (AP Photo)

On the 27th Anniversary of the Srebrenica Genocide

This past Monday, July 11, marked 27 years since the Srebrenica Genocide. The American people join the people of Bosnia and Herzegovina in mourning and honoring the victims – more than 8,000 men and boys who were murdered in July 1995.  The world will never forget.

We will continue to stand with the families who lost their loved ones in Srebrenica and with those who continue to search tirelessly for the missing, and fight for the truth and justice.  Bosnia and Herzegovina should acknowledge the facts about the Srebrenica genocide, honor the victims, support the survivors, and investigate and prosecute the perpetrators.  It takes courage and strength to overcome pain and loss and to promote hope and tolerance.  We are deeply committed to supporting leaders at all levels in Bosnia and Herzegovina who are willing to take meaningful steps toward reconciliation in the pursuit of a better future for all citizens.

In the midst of Russia’s brutal aggression against Ukraine today, we are all witnessing mounting evidence of attacks on civilians and war crimes by members of Russia’s forces.  Let us solemnly reflect on the unchecked abuses of predatory power, the contempt for human life and dignity, and the deliberate fueling of ethnic hatred that led to what the world witnessed in Srebrenica 27 years ago and what is happening in clear view today.  That is a path we utterly condemn and reject, and why today we stand united with the people in Ukraine as they defend their freedom and their very lives.