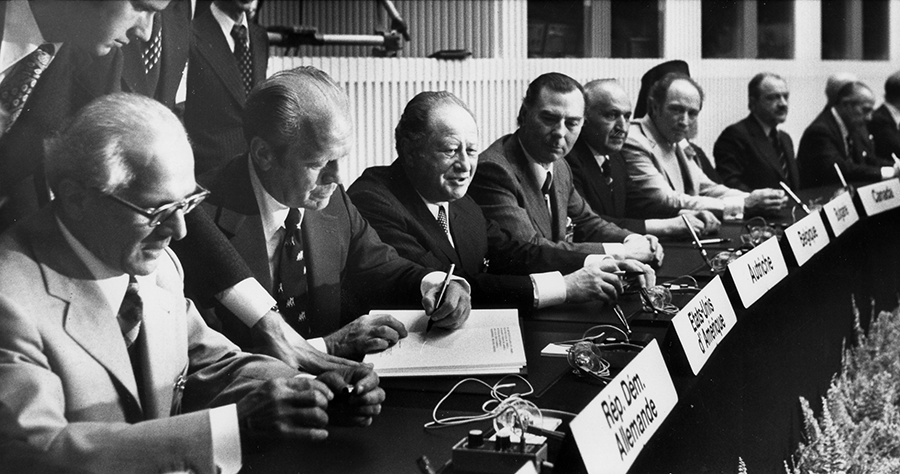 Thank you, Mr. Chair, for your bringing forward this wonderful 45th anniversary of the Helsinki Final Act.  I am grateful for your statesmanlike statement with respect to the Final Act and to the organization that you chair.  I think it shows a great deal of insight out of your leadership and we are grateful for that. I have listed very closely to my friend from the Russian Federation and the remarks that he has made today.

Forty-five years ago, the leaders of the United States, the Soviet Union, Canada, and the other countries of a divided Europe signed the landmark Helsinki Final Act, laying the foundation for a peaceful, rules-based order in our region.  The Helsinki Final Act’s ten guiding principles established a comprehensive approach to security, recognizing that lasting security and cooperation among states is inextricably linked to securing the human rights and fundamental freedoms of every person. And this was different. And it was a step forward in the civilization of man and agreed to by all the countries at that time.

We have accomplished a great deal since the signing of the Final Act, but our work remains far from complete.  And the purpose of the OSCE is to continue this great work.  In fact, today we confront many daunting challenges to our shared security.

This was a wonderful and dramatic film that we have just seen that reminds us all of the progress that was made.  And it is true that we have challenges here today.  I should remind people of some of these challenges.  Russia, in particular, continues to demonstrate its contempt for the OSCE’s principles and commitments through its ongoing violations of the sovereignty and territorial integrity of other participating States.  And this draws a dramatic contrast to the statements that were made within the film.  I was trying to write down some of the quotes of General Secretary Brezhnev to quote back to the assembly here today and there were so many good statements, so many positive looking statements, that I could not even record them all.  But there has been a departure from that good spirit of 1975, a departure that does not close off a path.  I can assure our friends from the Russian Federation that there is good will from the participating States of the OSCE, including from the United States and our friends, but we cannot shrink from telling the truth here today about where we really are.

Russia’s occupation of Crimea and aggression in eastern Ukraine contravene its international commitments, including to the Helsinki Final Act, and undermine peace and security in Europe.  Russia’s continued occupation of Georgia’s regions of South Ossetia and Abkhazia further undermine those commitments and principles.  My Russian friend has indicated that we should not engage in recriminations.  But it’s not recriminations, it is the truth.  And it must be spoken here at OSCE if there is any hope that we can return to a better path.  There is still an opportunity to return to a better path that will lead to security in Europe as was thought of in 1975 in the Helsinki Final Act.

Meanwhile, human rights in our region are under increasing threat from participating States that seek to repress the exercise of fundamental freedoms of expression, religion or belief, association and assembly.  And these principles apply not to any one particular country, but to every country here that has a duty to uphold these principles and must think carefully about the way they are conducting their government today.

That is why, last week at the Permanent Council, I urged all participating States to step up to the challenge of fulfilling our collective responsibility to hold the annual Human Dimension Implementation Meeting.  I am confident this can be done in a format that makes practical sense and takes into account the health concerns caused by the pandemic while at the same time preserving the consistency and the dedication to human rights here at the OSCE.  The global CoViD-19 crisis has exacerbated already troubling human rights trends in some OSCE countries.  It is more important than ever to show solidarity with and to hear the voices of human rights defenders, civil society advocates, independent journalists, and others regarding the actions some governments are taking in response to the pandemic.  I’m confident that an approach can be put together to do that.  And at least everyone will know that we are still committed to giving a voice to everyone on these issues.

On the security side, we also must redouble our efforts to urge Russia to end its occupation of Georgia and to help parties resolve the protracted conflict in Moldova.  We should continue to support efforts to resolve the Nagorno-Karabakh conflict peacefully, particularly the work of the Minsk Group Co-Chairs.  The conflict has gone on far too long, and the recent deadly violence has underlined once more the danger it poses to regional stability and security.  We need to move decisively to rebuild military transparency.  A critical step is to update and fully implement the Vienna Document, in order to rebuild trust and revitalize conventional arms control by enhancing military stability, predictability, and transparency and we must demand an answer as to why Vienna Document modernization would be blocked by any member, such as Russia, at a time when we need confidence building measures in this region.

In conclusion, we must use this anniversary not only to celebrate a landmark achievement in international diplomacy.  We also must redouble our efforts to keep the promises we made to one another and to our people forty-five years ago in Helsinki when there was such a bright opportunity for our future.  That opportunity remains to this day.  Only by fully implementing our OSCE commitments can our vast region reap the blessings of peace, prosperity, and freedom that all of our people deserve.