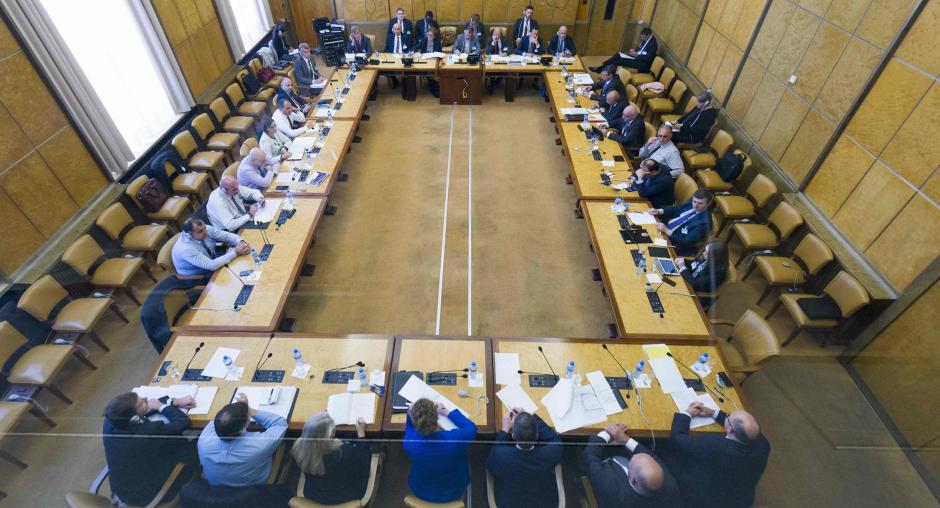 During the 54rd round of the Geneva International Discussions (GID) on the conflict in Georgia, the United States stressed the continuing relevance and significance of the GID (UNOG/Photo)

On the 54th round of the Geneva International Discussions

I would like to deliver the following statement by the United States on the 54th round of the Geneva International Discussions:

During the October 12-13 54th round of the Geneva International Discussions (GID) on the conflict in Georgia, the United States expressed support for the ongoing commitment of the participants to continuing the GID format.  The U.S. delegation welcomed the initiative by the Co-Chairs to organize discussions on human security and common challenges facing people in conflict-affected areas and appreciated the participants’ willingness to focus on ways to improve the daily lives of these people. The United States also welcomed many examples of effective cooperation between GID participants to find practical solutions to shared problems, for example, in responding to the COVID-19 pandemic.  The U.S. delegation urged participants to find additional areas for practical cooperation, including by working to ensure all conflict-affected people have access to COVID-19 vaccines and other critical medical care.

The United States noted the release of several detainees since the 53rd GID round.  The U.S. delegation urged all participants to completely end the practice of detaining civilians for seeking to visit family and cultural heritage sites, to engage in farming and other livelihoods, or to conduct other peaceful pursuits in conflict-affected areas.  The United States also urged participants to ensure all detainees are provided with information about their detentions in languages they understand and are not subjected to undue public attention.

The United States expressed support for efforts by GID participants and other conflict specialists to resolve outstanding missing persons cases arising from the conflict.  U.S. participants underscored resolution of remaining cases as a critical step in rebuilding trust and creating lasting peace and stability.  The United States recognized the return of remains to families over the summer as an important step for bringing peace to families of missing persons.

The United States reiterated the importance of progress in implementing the 2008 six-point ceasefire agreement.  In particular, U.S. participants underscored withdrawal of Russian troops to pre-conflict positions as a key step towards full resolution of the conflict.  The United States also underscored the importance of providing full access to conflict-affected areas for humanitarian organizations, in order to improve the lives of conflict-affected people.

The United States regretted it was not possible to discuss all items on the agenda due to a walk-out by participants from the Russian Federation and de facto authorities.

Madam Chair, the United States reiterates its strong support for Georgia’s sovereignty, independence, and territorial integrity within its internationally-recognized borders.  The United States will continue to call upon the Russian Federation to fulfill immediately its clear obligation under the EU-mediated August 12, 2008 ceasefire agreement to withdraw its forces to pre-conflict positions, as well as its commitments to allow unfettered access for the delivery of humanitarian assistance and not to impede creation of international security arrangements on the ground.