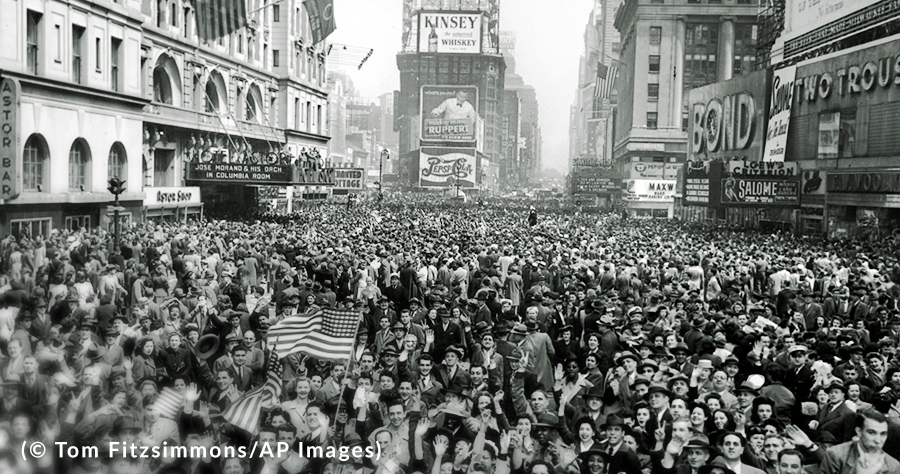 On the 75th Anniversary of Victory in Europe

We welcome here today Ambassador Küchler and look forward to the comments of Ambassador Paul, the United States welcomes the distinguished representatives to the Permanent Council and we thank you both for your presentation that you have made and will make on this historic occasion. Tomorrow we will celebrate the 75th anniversary of the end of World War II in Europe. Tens of millions lost their lives in that war. It is incumbent upon us to observe this solemn occasion.

Today, we recognize the shared sacrifice, enduring commitment, and unflinching bravery of the Allied forces and the underground movements in defeating the Axis powers in Europe. The people of many countries made great sacrifices and endured enormous suffering and loss of life.

It is also important to recognize, record, and remember the history of the Second World War in its entirety – both the darkest passages and those, of course also, that inspire hope. The United States remembers its one participation and loss of life in that great conflict together with our Allies, including Russia at that time.

As we teach our children about the horrors of the concentration camps, the massacres, and the deportations, let us also tell the stories of the righteous citizens who protected their neighbors, the soldiers who sacrificed everything to fight fascism, the ordinary citizens who rose up to resist occupation, and all those who fought for freedom and stood up in defense of the rights and lives of others. We should never forget the unique suffering of the Jewish people in the Holocaust, nor the merciless slaughter of so many other innocent civilians by the brutal Nazi regime. As we honor their memory, we renew our vow to never allow such horrific crimes against humanity to take place again. A warning that we all should remember even today in current events.

In remembering the full history of the Second World War we cannot forget that for many peoples in Central and Eastern Europe, the end of Nazi oppression was replaced by the imposition or re-imposition, against their wills, of Communist repression. For them, the full blessings of liberty that Western Europe celebrated in 1945 did not arrive until 1989, 1990, or later. Indeed, it was the human rights provisions of the Helsinki Final Act, establishing the OSCE, which helped enable those peoples to recover their freedom and human rights.

While the Soviet Union’s military and civilian population made tremendous sacrifices to defeat the Nazis, as our Russian colleague has reminded us today – and we honor those sacrifices entirely and completely – we should also not forget that the Second World War began in 1939, when Stalin and Hitler aligned through a pact that divided Eastern Europe into Soviet- and Nazi-controlled zones. I’m confident our Polish friends today have not forgotten that fact for one second.

For many nations of Europe, 1945 marked not a return to freedom, but rather the beginning of almost 50 years of oppression by the Soviet Union. The road to true liberation has been long, and in some cases, societies are still traveling along that road. We call on Russia to stop making self-aggrandizing claims based on purposeful misrepresentations of history. We stand in solidarity with our European partners against Russia’s falsification of history.

As we mark both the tragedies of the victims and the heroic sacrifices of all those who stood up for humanity and freedom, it is worth remembering that in the 75 years since the end of World War II, Europe has enjoyed its longest period of relative peace in modern history. Our commitment here at the OSCE is to protect that hard-won peace against all threats to the people of the OSCE region. To honor our shared history, it is imperative that we continue upholding peace and security, as well as defending human rights, fundamental freedoms, and the rule of law, which is one of the really great missions of the OSCE.