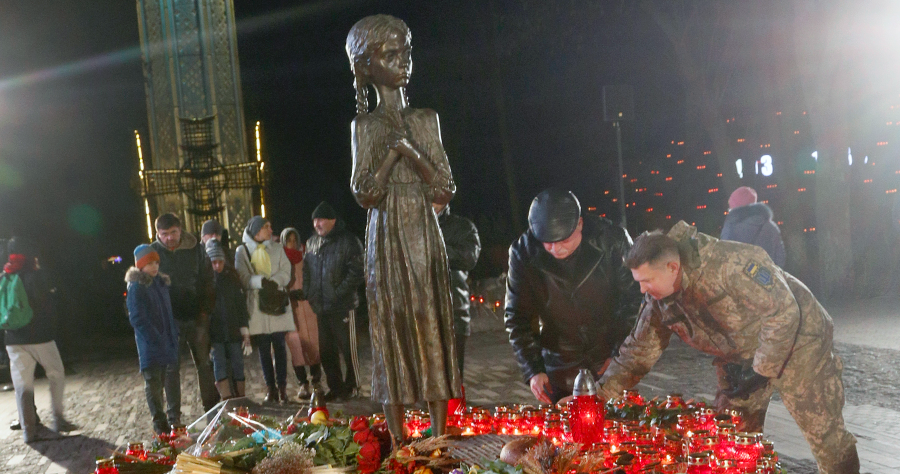 People light candles at a monument to victims of the Great Famine in Kyiv, Ukraine, Saturday, Nov. 23, 2019. Church bells tolled, candles flickered and national flags, adorned with black ribbons, flew in the Ukrainian capital Kyiv Saturday as the country marked the anniversary of the start of a Sovi

As delivered by Deputy Chief of Mission Harry Kamian
to the Permanent Council, Vienna
November 21, 2019

This Saturday, November 23, marks the 86th anniversary of the Holodomor, a manufactured famine orchestrated by the Soviet regime that resulted in the deaths of millions of Ukrainians.  Through the deliberate seizure of Ukrainian land and crops and forced collectivization, Soviet leaders inflicted widespread starvation and immeasurable human suffering.  Men, women, and children fell victim to this unimaginably brutal scheme that still looms large in the psyche of the Ukrainian people.

While this horrific tragedy was among the most atrocious acts of the twentieth century, the Soviet Union could not break the spirit of the Ukrainian people.  Today, Ukraine is once again under attack. Russia’s occupation of Crimea and continued aggression in eastern Ukraine has resulted in more than 13,000 deaths as Moscow attempts to once again manipulate and destroy the aspirations of the people of Ukraine.  The Kremlin’s malign campaign misjudges the resiliency of Ukrainians, ignores their desire for a better future, and is doomed to failure.

Today, as we join Ukraine in marking this solemn occasion, we reaffirm our support of Ukraine and its sovereignty and territorial integrity within its internationally recognized borders.  The people of Ukraine remain united in voice and spirit despite Russia’s temporary occupation of Crimea and its forces that fuel a manufactured conflict in parts of eastern Ukraine. The United States stands with Ukraine and its people as they chart their own path toward a prosperous and democratic future.