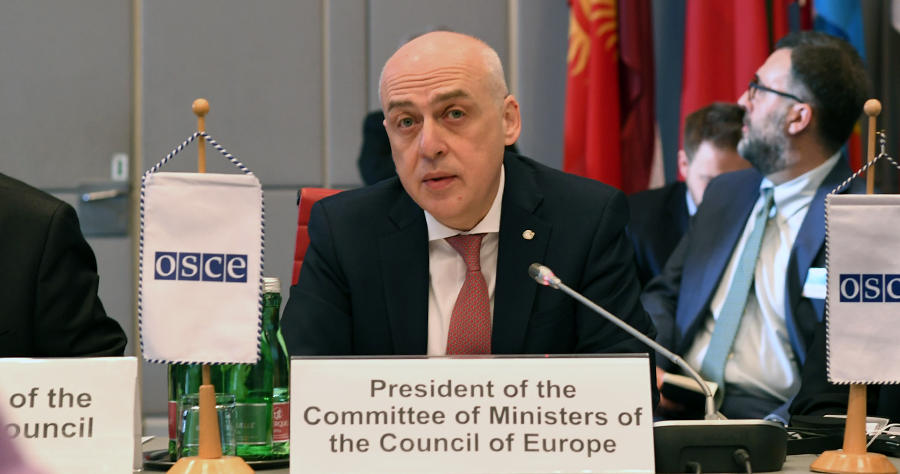 The Foreign Minister and current President of the Committee of Ministers of the Council of Europe, David Zalkaliani, shares the priorities of his country's presidency to the OSCE Permanent Council on January 30, 2020. (USOSCE/Gower)

Response to Foreign Minister David Zalkaliani, Georgia’s Presidency of the Council of Europe

Foreign Minister Zalkaliani, the United States warmly welcomes you to the Permanent Council as the representative of Georgia’s Presidency of the Council of Europe. Georgia’s leadership of an important European organization further demonstrates your country’s contributions to the international community.

Despite significant external threats to its security, Georgia has transitioned from being a “security consumer” to a “security defender.” We are grateful for Georgia’s steadfast partnership in Afghanistan. Georgian troops served alongside the servicemen and women from 41 other countries in the International Security Assistance Force in Iraq, where Georgia was the largest non-NATO and per capita contributor and served in some of the most dangerous regions. Today, Georgia is a staunch contributor to the NATO-led Resolute Support Mission. We appreciate Georgia’s sacrifices and efforts to the security of Afghanistan.

As a “security defender,” Georgia is now presiding over the Council of Europe, working to safeguard a rules-based international order predicated on respect for state sovereignty, rule of law, and human rights. The OSCE shares these objectives, which underpin its comprehensive approach to security. Security is strengthened when the OSCE and the Council of Europe work in concert to protect and promote our common values and principles, as reflected in the Helsinki Final Act and the Statute of the Council of Europe.

States contravening their OSCE commitments and violating their treaty obligations must be held accountable. Regrettably, through aggressive behavior toward other states and repressive actions against its own people, Russia continues to undermine international security. Russia fuels the conflict in eastern Ukraine, occupying Crimea under the guise of a purported annexation. Russia must withdraw forces, equipment, and support from Ukraine’s Donbas region. Russia also occupies over 20 percent of Georgian territory. We call on Russia to fulfill its obligations under the August 12, 2008 six-point ceasefire agreement with Georgia, including by withdrawing Russian forces to their pre-hostility positions and allowing unimpeded access for humanitarian organizations.

Russia engages in hybrid campaigns in many parts of the OSCE region, including interfering in elections in the United States and European countries. Are the Russian people the source of this misconduct? How would we know? At home, Russia continues to repress civil society, independent media, the political opposition, and members of religious minorities. If Russia is serious about its commitments to the OSCE and binding obligations to the Council of Europe, it must immediately cease this egregious behavior.

Minister Zalkaliani, in December the United States will celebrate its 15th anniversary as an observer to the Council of Europe. We are proud to be full members of the Venice Commission and Group of States Against Corruption (GRECO) and a state party to the Budapest Convention on Cybercrime. The joint legal opinions of the Venice Commission and the OSCE help countries such as Georgia and Serbia strengthen rule of law and democratic institutions, making them less vulnerable to external manipulation and pressure. Our joint election observation missions illustrate our strong commitment to helping states achieve their democratic aims with outcomes that reflect the will of their people.

The European Court of Human Rights serves as a trusted safeguard of justice in countries such as Russia where recourse is hard to come by. We call on Russia to respect the decisions and rulings made by the European Court in its regard.

In fact, the Court is considering claims arising from Russia’s occupation of Crimea, its aggression in eastern Ukraine, and its role in the downing of MH-17. Finally, the United States was pleased to join the Council of Europe’s 24/7 Network of Contact Points on Foreign Terrorist Fighters and on the Exchange of Information Regarding the Legal Standing of Victims of Terrorism.

In conclusion, Mr. Foreign Minister, the United States supports Georgia’s Euro-Atlantic aspirations and remains a strong advocate for Georgia’s contributions to the international community and rules-based order. Thank you, Minister Zalkaliani, for your appearance at the Permanent Council. We value cooperation between the OSCE and the Council of Europe—past, present, and future.