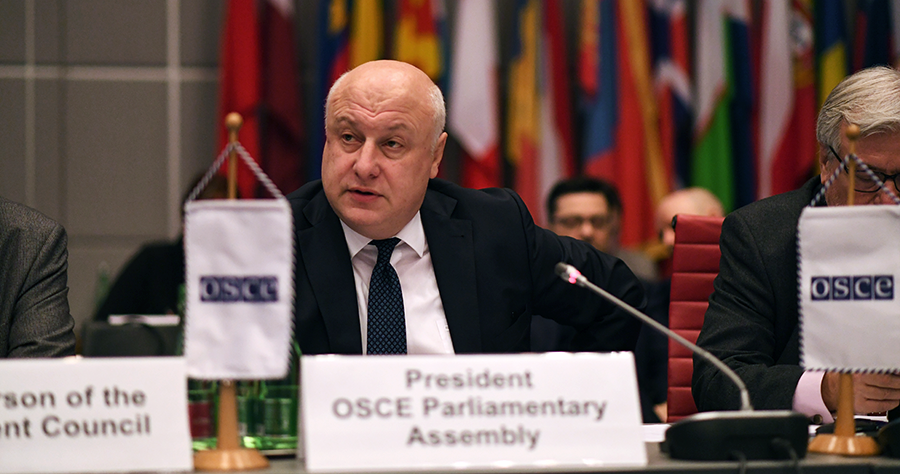 Ambassador George Tsereteli, the President of the OSCE Parliamentary Assembly, reports on his institution's recent and upcoming activities to the Permanent Council on January 16, 2020.(USOSCE/Gower)

The United States welcomes President Tsereteli back to the Permanent Council.

Mr. President, under your dynamic leadership, the OSCE Parliamentary Assembly has engaged actively across the OSCE region. We regret this may be your last address to the Permanent Council in your capacity as President. We value the new level of collaboration between the Parliamentary Assembly and the Permanent Council that you and the Assembly’s leadership have fostered. And we hope your successor will continue the momentum you have built since 2017.

The United States welcomes your upcoming visit to Washington for a two-day seminar for 50 young parliamentarians from across the OSCE region, including several from our Mediterranean and Asian Partners. The seminar is organized by the U.S. Helsinki Commission in conjunction with the Parliamentary Assembly. It is a wonderful opportunity for young legislators to engage with their peers in the United States, as well as with other political leaders, to strengthen the Transatlantic network, which is so strongly represented here at the OSCE. This gives an opportunity for the young parliamentarians to address the emerging security challenges that we are so focused on in the days around these meetings. The seminar is an investment in our future that will ensure we are moving forward together.

Thank you also for agreeing to share your parliamentary diplomacy experience alongside your counterpart from the NATO Parliamentary Assembly at a public hearing at the U.S. Capitol next month. The event will increase awareness of the OSCE among U.S. policymakers, analysts, and the public and highlight the role parliamentarians play in addressing security challenges, which again are our focus right now at the Permanent Council.

Under your leadership, the Parliamentary Assembly’s ad hoc Committees and Special Representatives have enhanced collaboration with this Permanent Council and OSCE Executive Structures as well as with the OSCE field missions, Partners for Cooperation, and other international organizations.

That interaction has improved our effectiveness as we work together to combat corruption, elevate engagement with civil society, and invigorate the role of women and youth in peace and security.

In your statement, you highlighted the elections the Parliamentary Assembly intends to observe in 2020. My country deeply appreciates the OSCE’s active interest in the conduct of U.S. and other participating States’ elections over the past two decades. We trust your new guidelines regarding observer impartiality will help maintain the integrity of this important work throughout the OSCE region. I encourage the Assembly to form observation teams with parliamentarians from different countries to emphasize the international nature of OSCE’s observation efforts. Any logistical challenges, which that diversity might create, can be overcome.

We appreciate the Assembly’s strong stance and condemnation of Russia’s ongoing aggression in the OSCE area. which has been widely discussed in the statements. Moscow’s contravention of Helsinki principles is particularly flagrant, not only in Ukraine, but also in your home country of Georgia. Russia would prefer we ignore its contempt of OSCE commitments and divert attention from its egregious behavior to areas, quote, “where we can cooperate.” We all must make clear, as the Parliamentary Assembly has done, that we will never abandon our defense of Helsinki principles.

Russia’s ongoing contravention of OSCE principles will remain at the forefront of our agenda until the Kremlin abides by Russia’s Helsinki commitments. To be clear, the attempt to annex by force undermines the Helsinki Accords, which are the basis for this organization – for the OSCE’s existence – in the first place.

The United States shares the Assembly’s dedication to the development of democratic institutions and defense of human rights and fundamental freedoms, which continue to be violated in many OSCE countries. Parliamentarians play a positive, powerful role in calling out and combating repression and demonstrating solidarity with human rights defenders and civil society activists.

Anti-Semitism, racism, and other forms of intolerance and discrimination, human trafficking, corruption, and violence against journalists challenge us all. The Parliamentary Assembly introduced many of these topics to the OSCE agenda. Continued collaboration can help us make meaningful progress in addressing these serious concerns.

Mr. President, we urge the Parliamentary Assembly to keep up the good work. With gratitude for the time and effort and your successes you have devoted to our common cause, I wish you the best as you pass your responsibilities to a new president in July. You will remain a trusted friend of the United States and the OSCE.