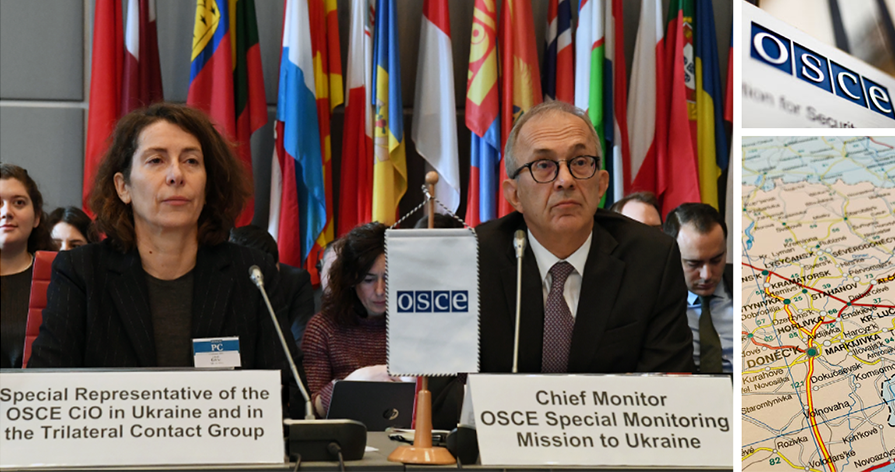 Ambassadors Çevik and Grau, the United States welcomes you back to the Permanent Council.  We are grateful for your tireless efforts to bring about a peaceful resolution to the Russia-led conflict in eastern Ukraine.

Chief Monitor Çevik, you opened your most recent report with a concise state of play; noting that the situation on the ground, while improved if compared to ceasefire violations prior to July 27, 2020, is increasingly fragile; that civilians suffer hardships due to the prolonged closure of entry-exit crossing points; and that the Special Monitoring Mission faced considerable impediments to its movement, overwhelmingly in areas controlled by Russia-led forces.  93%, in fact, of the reported movement restrictions were recorded in Russia-held territory, a clear demonstration of Moscow’s disdain for the Mission’s mandate.

We appreciate that even as the SMM reports detail a two-fold increase in ceasefire violations over the last reporting period, your team is careful to place such statistics in context, making clear that even with the increase, daily levels of violence are at levels far below that of one year ago.

Your careful analysis is particularly important at this moment as Russia increases attacks and other provocative actions at the Line of Contact and builds up its forces along the border with Ukraine and in occupied Crimea.  Now, more than ever, the participating States depend on the work of your Mission and its dedicated monitors to deliver the impartial reports providing us an accurate view of the situation on the ground.  SMM reports do not support Russia’s allegations of a Ukrainian military buildup—allegations Russia used to justify its aggressive posturing along Ukraine’s border, in occupied Crimea, and in nearby waters in the Sea of Azov and the Black Sea.

Ambassador Grau, your work is both significant and challenging and we regret Russia continues to block progress in Trilateral Contact Group discussions.  You have often spoken about the harmful impact of linking political and security issues at the TCG.  Regrettably, the civilian communities of eastern Ukraine suffer as negotiations remain at an impasse.  We commend your efforts to guide the relevant parties of the TCG—Russia and Ukraine—toward designation of additional disengagement and mine action areas.

As noted in Ambassador Çevik’s report, Russia’s failure to direct the opening of the entry-exit crossing points it controls along the Line of Contact places additional burdens on civilians, who, in order to conduct the business of their daily lives, seek to exit Russia-controlled territory.  Ambassador Grau, the United States deeply appreciates your efforts to spur progress in the TCG.  All participating States should identify ways to support your efforts, however, we regret that one participating State remains intent on blocking a peaceful resolution of this conflict.

We further regret the Special Monitoring Mission, despite having a mandate to monitor throughout all of Ukraine, is prevented by Russia from freely operating in Russia-occupied Crimea.  Despite Moscow’s efforts to hide its mistreatment of Crimean Tatars, ethnic Ukrainians, and members of other ethnic and religious minority groups, the international community is fully aware of the abuses endured by these communities at the hands of Russia’s occupation authorities.

We welcome the Department of Treasury’s April 15 announcement of sanctions against five individuals and three entities related to Russia’s occupation of Crimea and the egregious human rights abuses it commits there.  Notably, the sanctions package included the sanctioning of the Simferopol SIZO-1 pre-trial detention center, notorious for widespread severe human rights abuses, reports of torture, proliferation of communicable diseases, poor and inhumane living conditions, and inadequate medical assistance.

Additionally, Treasury announced sanctions against one individual and two entities responsible for the construction of the  Kerch Strait Bridge now connecting Crimea to Russia, in blatant disregard of Ukraine’s territorial integrity.

For more than seven years, Russia has steadily militarized the Crimean peninsula.  Even now, it is building up its forces in Crimea, intentionally impeding maritime traffic as it brings in additional ships and personnel to bolster its military posture on Ukrainian territory it seized and occupies, as well as nearby territorial waters.

The United States condemns Russia’s occupation and its militarization of Crimea; we call on Moscow to reverse its military buildup there and fulfill its commitments to transparency under the Vienna Document.  We further call on Russia to cease its provocations along its border with Ukraine and remove all its military forces and equipment/materiel from eastern Ukraine.

Before I close, I wanted to acknowledge that tomorrow, April 23, marks the fourth anniversary of the death of Joseph Stone, the American SMM medic killed by a landmine in eastern Ukraine in 2017.  Despite four years passing since his death, we have not forgotten the sacrifice he made to try to help end this bloody conflict continuing today.  Our thoughts are with his family, friends, and colleagues, to whom we extend our heartfelt condolences.

Mr. Chair, the United States fully supports Ukraine’s sovereignty, independence, and territorial integrity within its internationally recognized borders, including its territorial waters.  We do not, nor will we ever, recognize Russia’s purported annexation of Crimea.  We join our European and other partners in affirming our Ukraine-related sanctions against Russia will remain in place until Russia fully implements its Minsk commitments and returns full control of Crimea to Ukraine.