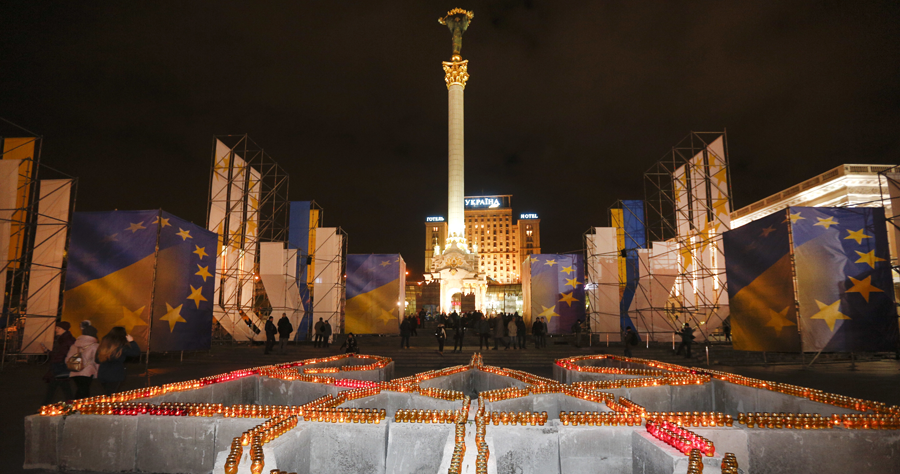 People light candles placed in the shape of Ukraine's coat of arms, to pay tribute to the victims of the 2013-2014 anti-government protests called the Revolution of Dignity, during commemoration events in central Kiev, Ukraine, Tuesday, Nov. 21, 2017. (AP Photo/Efrem Lukatsky)

On the Anniversary of the Revolution of Dignity

The United States joins the people of Ukraine in honoring the memory of the Revolution of Dignity and those who gave their lives to build a more just, democratic, and European Ukraine.

The United States deeply values the friendship we have developed with Ukraine over 25 years of diplomatic relations. We commend Ukraine’s persistence in the face of great challenges, including the Russia-led conflict in Donbas, and Russia’s occupation and attempted annexation of Crimea.

Mr. Chair, despite these hardships that Ukraine has endured, the people of Ukraine have shown a fierce determination to create economic opportunities, fight corruption, and strengthen their democratic institutions.

Mr. Chair, as you know, today is Thanksgiving, a very important day in my country. It is a day of reflection, and a day to give thanks. I have a lot to be grateful for, and thankful for, but today, together with our Ukrainian colleagues, I am thankful for being able to represent a country that is on the right side of the conflict in Ukraine.

In closing, the United States is proud to have been a partner in Ukraine’s journey. We remain steadfast in our support for its sovereignty, territorial integrity, and democracy.