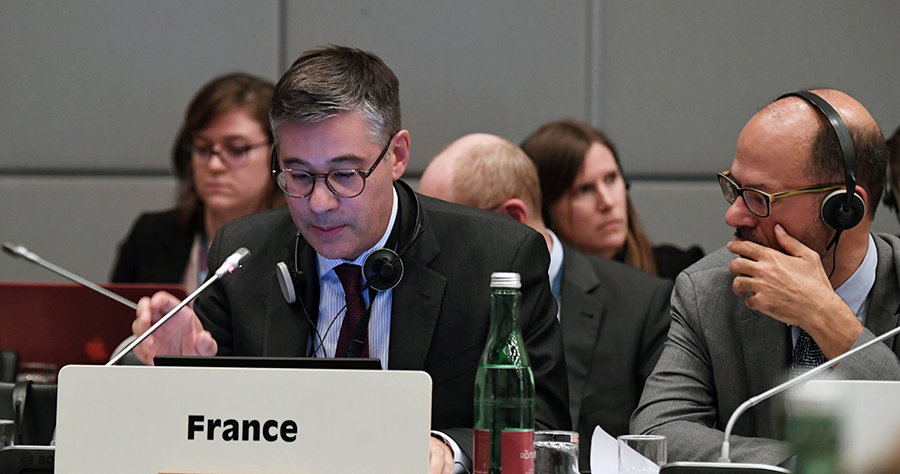 Marking the International Day to End Impunity for Crimes Against Journalists, Deputy Permanent Representative of France to the OSCE, Alexandre Vulic, delivers the joint statement by the informal OSCE Group of Friends on Safety of Journalists at the Permanent Council on October 31, 2019.

As delivered by Alexandre Vulic, Deputy Permanent Representative of France to the OSCE
to the Permanent Council, Vienna
October 31, 2019

I am pleased to make this statement on behalf of the informal Group of Friends for the Safety of Journalists, composed of the following participating States: Austria, Canada, Denmark, Estonia, Finland, France, Germany, Greece, Latvia, Lithuania, Montenegro, the Netherlands, Norway, Sweden, the United Kingdom, and the United States.

“Every journalist killed or neutralized by terror is an observer less of the human condition. Every attack distorts reality by creating a climate of fear and self-censorship.” These are the first words of the UN Plan of Action on Safety of Journalists and the Issue of Impunity, and we wish to echo them on the 2nd November, the International Day to End Impunity for Crimes against Journalists.

At this occasion we pay tribute to journalists and other media actors who have been targets of violence and arbitrary detention, politically motivated prosecutions or even killed for their journalistic work. We also commend civil society organizations, human rights defenders and journalist networks for exposing and highlighting these acts and for their advocacy for a free and pluralistic media. We owe it to the victims and their families to ensure that their sacrifices will not be forgotten.

The UN Plan of Action on Safety of Journalists and the Issue of Impunity reminds us that legal instruments represent one of the key tools that the international community has at its disposal in the struggle for the safety of journalists and against impunity.

This year, when commemorating the International Day to End Impunity for Crimes against Journalists, we are very pleased to be able to also refer to our own OSCE commitments. The Ministerial Council Decision on Safety of Journalist adopted last year in Milan represents a milestone in the OSCE’s work for the safety of journalists. All participating States noted “with concern the climate of impunity that prevails when violent attacks committed against journalists remain unpunished”. Moreover, participating States “recognized the role of governments, legislators and the judiciary in enabling a safe working environment and ensuring safety of journalists by, inter alia, publicly condemning and bringing to justice all those responsible for crimes against journalists”.

Let us now reaffirm our commitments and fully implement them. We encourage all the participating States to “take effective measures to end impunity for crimes committed against journalists, by ensuring accountability as a key element in preventing future attacks, including by ensuring that law enforcement agencies carry out swift, effective and impartial investigations into acts of violence and threats against journalists, in order to bring all those responsible to justice, and ensure that victims have access to appropriate remedies”.

We fully support the OSCE Representative on Freedom of the Media and his dedication to the fight against impunity. We welcome the fact that two working sessions were dedicated to Safety of Journalists on the 18th of September during the last Human Dimension Implementation Meeting in Warsaw. We stand with those urging to keep on discussing these issues “until such time as there is justice for the families of murdered journalists” and “the masterminds and perpetrators of their murders have been prosecuted and convicted”.

We deplore that masterminds and perpetrators have yet to be brought to justice in around 85% of the cases concerning killings of journalists in the OSCE region. This situation is alarming. Thorough and fair investigations should be carried out promptly so that appropriate judicial processes can be swiftly initiated in order to bring justice. We, as participating States, must support all persons and organisations raising awareness and helping uncover crimes against journalists. We must not forget the lives indelibly affected by these crimes and we would like to highlight UNESCO’s upcoming campaign #KeepTruthAlive.

Mr. Chairperson, Impunity is a passport for more violence and attacks. It is a battle that must be fought every day, everywhere. We, the OSCE participating States, have committed to take on this battle, and we must now follow up on our obligations.