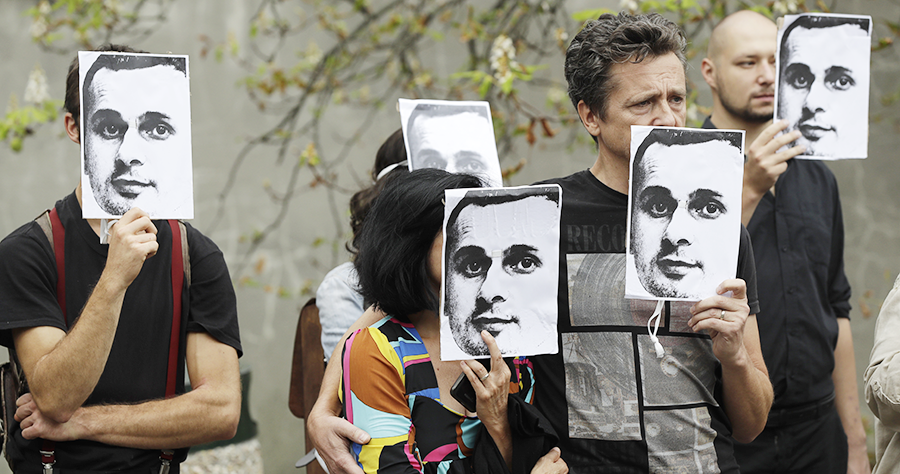 People hold up portraits of Ukrainian filmmaker Oleg Sentsov, who is currently on hunger strike in a Russian jail. (AP Photo/Petr David Josek)

As delivered by Acting Deputy Chief of Mission Gregory Macris
to the Permanent Council, Vienna
August 30, 2018

Today marks the 109th day of the hunger strike of Oleh Sentsov, a Ukrainian filmmaker serving a 20-year sentence on baseless terrorism charges in a remote Russian prison. The United States is deeply concerned about his deteriorating health, and we renew our demand that Russia immediately release him and all Ukrainian citizens arbitrarily imprisoned in Russia or in the sovereign Ukrainian territory of the Crimean peninsula, currently occupied by Russia.

We are alarmed by the prospect of another innocent person dying in Russian custody. Russian authorities must release Sentsov to avoid such a tragedy. The failure to do so inevitably will lead to calls for those officials responsible to be held to account for any harm he suffers.

Regrettably, Oleh Sentsov is only one of over 60 Ukrainians unjustly imprisoned in Russia or in Russian-occupied Crimea. His co-defendant, Oleksandr Kolchenko, is also serving a 10-year sentence in a remote Russian prison. In addition to Sentsov and Kolchenko, over a dozen ethnic Crimean Tatars are in prison on trumped-up charges of terrorism or extremism in retaliation for their opposition to Russia’s occupation of their homeland. There are also other wrongfully imprisoned Ukrainians currently on hunger strike, whose health is at risk today, including Volodymyr Balukh and Oleksandr Shumkov. The transfer of Ukrainian detainees to Russian prisons far from their families, the harsh conditions there, closed trials, and abusive psychiatric confinement represent a revival of cruel, Soviet-era practices.

On May 14, Sentsov began a hunger strike protesting the unlawful imprisonment of the Ukrainian political prisoners in Russia and demanding the release of these individuals and others. We echo his call: it is time for these prisoners – including Sentsov – to come home.

We do not recognize Russia’s purported annexation of Crimea and Crimea-related sanctions will remain in place until Russia returns full control of the peninsula to Ukraine.