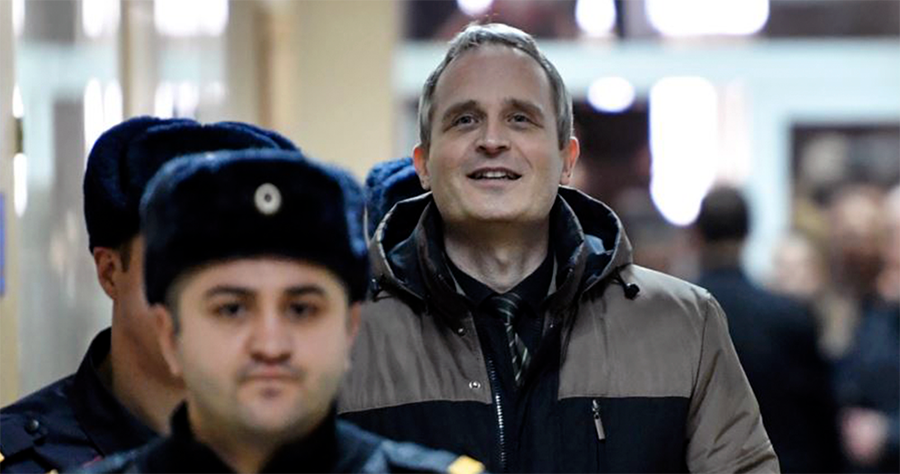 Dennis Christensen, a Jehovah’s Witness found guilty of extremism in Russia, is escorted into a courtroom in the the town of Oryol. (PHOTO: RFE/RL)

On the Ongoing Harassment of Jehovah’s Witness Members in Russia

The United States condemns the recent conviction of Dennis Christensen, a Danish member of the Jehovah’s Witnesses in Russia. Mr. Christensen was sentenced to six years in prison for what the Russian government termed “organizing the activity of an extremist organization,” when, in reality, Mr. Christensen was exercising his right to freedom of religious belief. Mr. Christensen’s conviction is a landmark case, representing the first instance in which a Russian court has sentenced a Jehovah’s Witness to prison time, and it raises serious concerns about what fate may await other Witnesses now facing similar charges.

The increasing practice in Russia of targeting members of religious groups through the use of legislation purportedly concerned with so-called “extremism” or “terrorism” is at odds with Russia’s international obligations and OSCE commitments regarding freedom of religion or belief, and appears inconsistent with the Russian Federation’s own constitution.

The Russian Federation has repeatedly asserted that its efforts to combat so-called “extremism” would not interfere with the exercise of freedom of religion or belief. At a December 11, 2018 meeting of Russia’s Presidential Human Rights Council, President Putin said it is “complete nonsense” to treat peaceful religious communities as terrorist organizations. Mr. Christensen’s conviction clearly contradicts these statements.

We urge the Russian Federation to immediately release all prisoners held in detention for exercising their religious freedom, including Mr. Christensen, to drop ongoing criminal investigations targeting Jehovah’s Witnesses’ activities, and to cease the confiscation of the Jehovah’s Witnesses’ property. We further call on Russia to cease using its “anti-terrorism” and “anti-extremism” legislation to target peaceful members of religious groups. Russia should respect the rights of all people on its territory to exercise the freedom of thought, conscience, religion, or belief.