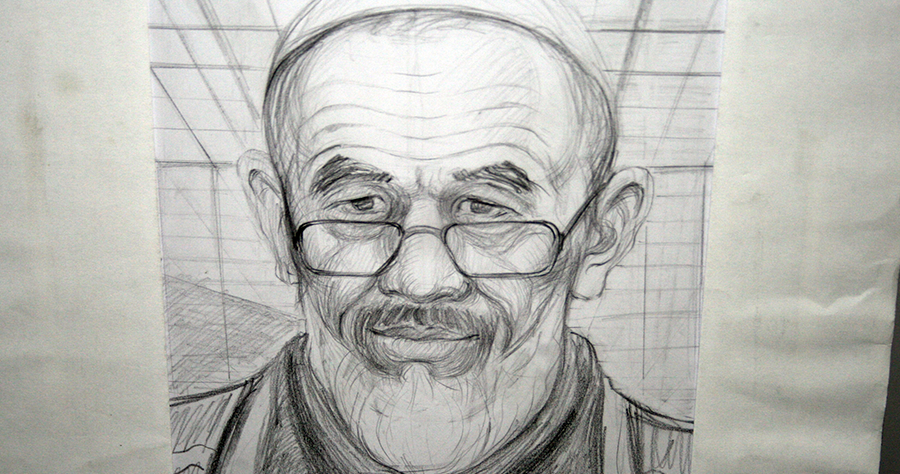 Sketch of Azimjan Askarov, prominent Kyrgyzstani human rights defender, drawn by himself during his time in prison in Bishkek. (photo: OSCE)

On the Passing of Human Rights Defender Azimjon Azkarov

As delivered by Political Officer Christine Harper
to the Permanent Council, Vienna
August 31, 2020

The United States expresses its deepest condolences to the family of human rights activist and journalist Azimzhan Askarov, and to his colleagues in Kyrgyzstan’s human rights community, who, cherishing his memory, will carry on Mr. Askarov’s work in defense of human rights.

On July 24 in Kyrgyzstan, Mr. Askarov, an ethnic Uzbek human rights activist serving a life sentence, died in prison, despite a long campaign by international and local human rights groups to secure his release.  Following a deeply flawed trial, Mr. Askarov was sentenced to life in prison for allegedly organizing riots that caused the death of a police officer during the 2010 ethnic clashes between Kyrgyz and Uzbeks in southern Kyrgyzstan.  On May 21 before this Council, I called upon the Kyrgyz Republic to release Mr. Askarov, who was 69 years old and in poor health.  Nonetheless, the outcome we all had feared is now an irreversible reality.

Mr. Askarov’s initial trial was marred by irregularities, including alleged torture of witnesses by the police, witness intimidation in the courtroom, and the court’s refusal to hear witnesses for Mr. Askarov.  In 2016, the UN Human Rights Committee concluded that Mr. Askarov was arbitrarily detained, held in inhumane conditions, tortured, and otherwise mistreated without redress; it further called on the Kyrgyz Republic to release Mr. Askarov immediately and hold a retrial that conformed to international norms.  The United States, too, frequently called for his release.  On May 13, 2020, the Supreme Court of the Kyrgyz Republic upheld Mr. Askarov’s conviction and life sentence.

Despite numerous media reports in the past weeks that Mr. Askarov was gravely ill—possibly with CoViD-19—Kyrgyz authorities insisted he had no symptoms and refused to release him.  We echo the UN High Commissioner for Human Rights’ call for a prompt, impartial, and effective investigation into his death.  It is important to clarify the circumstances of his death and the conditions in which he was held in the final months of his life.

Mr. Askarov committed his life to the defense of human rights and to the condemnation of violence and torture.  He was the recipient of the 2011 Homo Homini Award, the 2012 International Press Freedom Award, and the 2014 Human Rights Defender Award.  Even from prison, Mr. Askarov called for reconciliation and understanding between all peoples.  He shall be missed.