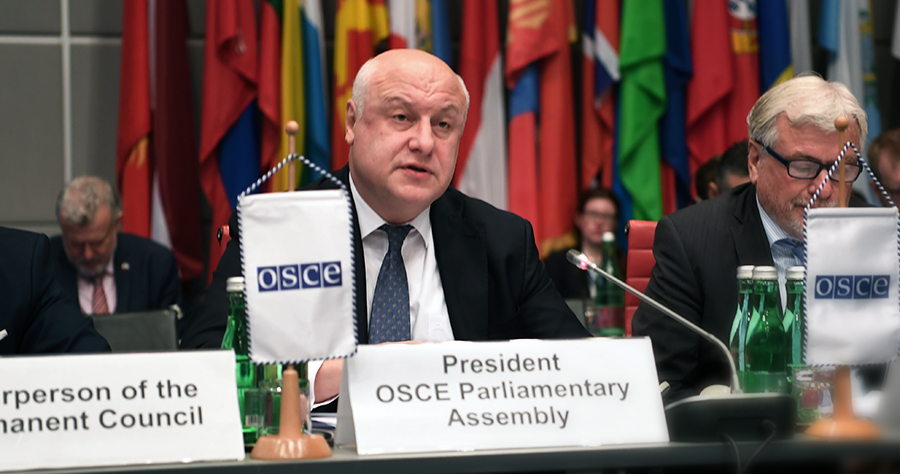 OSCE Parliamentary Assembly (OSCE PA) President George Tsereteli gives his fourth report on the activities of the OSCE PA to the Permanent Council on October 31, 2019. (USOSCE/Gower)

The United States welcomes President Tsereteli back to the Permanent Council.

The United States appreciates the role parliamentary diplomacy plays in advancing our common OSCE agenda. The Department of State and Congress, through the Helsinki Commission, appreciate your leadership of the Parliamentary Assembly and the contributions of the Liaison Office in Vienna, led by Ambassador Nothelle.

The Parliamentary Assembly and its members are valued partners to this Permanent Council, in other OSCE fora — particularly the Human Dimension Implementation Meeting in Warsaw and the Ministerial Council—and as members of election observation missions. Parliamentary Assembly engagement enhances the OSCE’s overall effectiveness. We are grateful to U.S. Senator Roger Wicker for committing to serve in the Assembly’s leadership as Vice President.

The United States applauds the Parliamentary Assembly for condemning Russian ongoing aggression, including Russia’s purported annexation of the Ukrainian territory of Crimea, as well, Mr. President, as its occupation of parts of your home country, Georgia.

In Luxembourg in July, the Assembly overwhelmingly censured Moscow for its breach of obligations for the demise of the Intermediate-Range Nuclear Forces Treaty.

The Assembly has taken a principled stand against violations of human rights and fundamental freedoms in Russia and has joined many of us in drawing particular attention to the reports of serious human rights violations and abuses in Russia’s Republic of Chechnya, which the Kremlin allows to occur with impunity.

Over the past year, the Parliamentary Assembly addressed Russia’s failure to attain justice for the 2015 murder of Russian political opposition figure, Boris Nemtsov. We hope the Assembly will persist in these efforts and, specific to the Nemtsov murder, keep us informed of the conclusions and recommendations of the Assembly’s designated representative on the issue, Swedish parliamentarian Margareta Cederfelt.

We welcome the Assembly’s adoption of a resolution on The Role of Civil Society — Individuals and Non-Governmental Organizations — in Realizing the Aims and Aspirations of the OSCE. This resolution was the initiative of U.S. Representative and Helsinki Commission Chairman Alcee Hastings. The appointment of Finnish parliamentarian Pia Kauma as Special Representative on Civil Society Engagement will allow her to highlight restrictions in many participating States that prevent the development of vibrant civil society that can contribute to advancements in the human dimension of security. The Special Representative’s role is to spotlight efforts by some participating States to unduly impede civil society access to and participation in OSCE activities.

The United States lauds the Assembly’s work on combatting anti-Semitism, racism, and intolerance. U.S. Senator Ben Cardin plays an active role as the Assembly’s Special Representative on these issues.

We also applaud the Assembly’s efforts to combat human trafficking, in which U.S. Representative Chris Smith serves as Special Representative. OSCE Ministerial decisions and ongoing activities have benefitted from the Assembly’s initiatives on these and other issues, including on freedom of the media and the safety of journalists, migration, counter-terrorism, energy security, and combatting corruption. Members of the U.S. Congress, I am happy to say, contribute in these areas, as well.

In closing, Mr. President, we appreciate your principled efforts to advance a strong OSCE agenda. The United States encourages you to continue this important work.