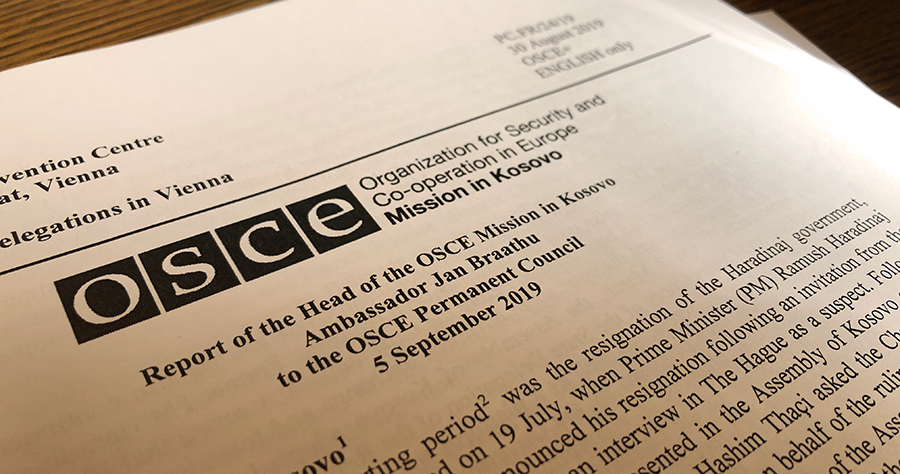 A copy of the report delivered by the head of the OSCE Mission to Kosovo Ambassador Braathu at the Permanent Council meeting on September 5, 2019 (USOSCE)

Welcome back to the Permanent Council, Ambassador Braathu.  This is another time that I am pleased to hear firsthand about the work of the OSCE Mission in Kosovo.  We appreciate the scope and depth of the Mission’s contributions to regional security and your efforts to bring reconciliation among all peoples of the Western Balkans and Kosovo. Lasting peace in the western Balkans will be possible only when Kosovo’s sovereign status is recognized. The OSCE is a critical part of that equation.

The past year has been challenging. Reacting to Serbia’s campaign to delegitimize Kosovo’s independence, Pristina imposed the 100 percent tariff on goods coming from both Serbia and Bosnia and Herzegovina. The United States clearly and publicly called for both parties to cease their provocations and return to talks to normalize their relationship. This is essential to both countries’ European futures. Actions and rhetoric from both capitals have fueled uncertainties.

The August 13 joint statement by France, Germany, Italy, the UK, and the United States reiterated the call for an end to mutual provocations, noting “the status quo prevents progress on Kosovo’s and Serbia’s path towards the European Union and is simply not sustainable.” Now is the time, through a return to good faith negotiations, to conclude an agreement that both parties can support.

The OSCE Mission in Kosovo, your Mission, Mr. Ambassador, contributes to creating and sustaining progress. One key area for OSCE engagement will be the October 6 elections in Kosovo. For years, the OSCE’s technical and advisory assistance has been instrumental to ensuring peaceful, genuinely free and fair elections across the country in which all voices are heard. The United States contributed to this process in many ways, including by supporting the establishment of Civil Registry Offices in the Kosovo Serb-majority north and regulations to allow Kosovo Serbs to register and vote. This system worked well in the municipal elections in the north in May. As the U.S. Embassy in Pristina, together with other partner embassies, stated last Friday, “elections and the formation of a new government offer a chance to urgently restart talks with Serbia with the objective of reaching a comprehensive, politically sustainable, and legally binding agreement that contributes to regional stability.” We look forward to an energetic campaign and free and fair elections.

Ambassador Braathu, thank you for focusing the OSCE Mission in Kosovo on the issues that will help Kosovo progress along its democratic trajectory. The Mission is helping to build the capacity of a multiethnic Kosovo Police to enforce the law professionally and humanely. The OSCE Mission in Kosovo also is helping to protect media freedom and the safety of journalists, and strengthen the ability of citizens to discern fact from divisive political rhetoric. The Mission also supports the fight against corruption.

Combating corruption and enhancing the rule of law must be a top priority for Kosovo. As your report pointed out, on August 16 the United States withdrew from its position as international board member of the Kosovo Property Comparison and Verification Agency in protest of the Kosovo Assembly’s questionable appointment of an unqualified individual as director. We will continue to watch and react in instances of corruption and challenges to good governance as the United States is committed to good governance in Kosovo.

Finally, Mr. Chairman, we were disappointed the Slovak Chairmanship broke from two years of established practice of Chairmanships inviting host country beneficiaries to attend the informal meetings prior to the Permanent Council reports. It is one thing to hear from an organization about the work it is doing, but it is even more impactful when we hear directly from the host country and its nationals who are benefitting from that work. That is how we know the OSCE is working effectively. Let me be clear, as the OSCE’s leading donor, the United States wants to hear from the beneficiaries of our investments.

Thank you, Ambassador Braathu, for your leadership, your initiatives, and your excellent report. Be assured that you have the full support of the United States.