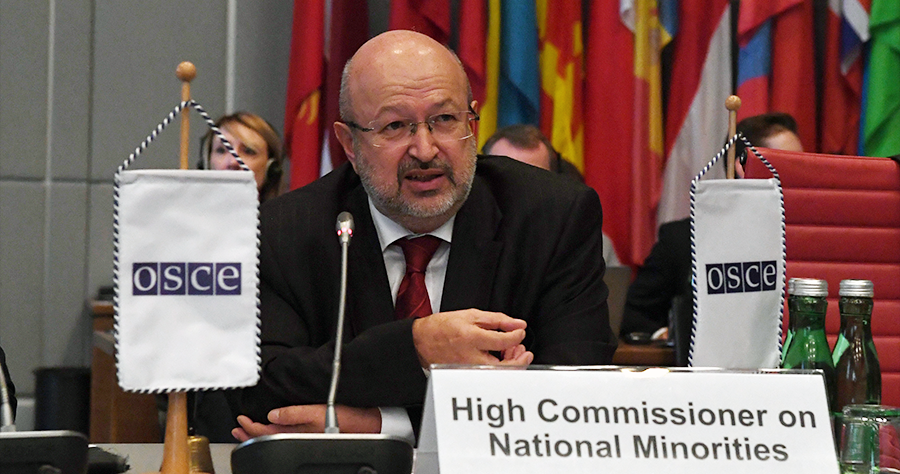 The OSCE High Commissioner for National Minorities, Lamberto Zannier, delivers his office's report to Permanent Representatives to the OSCE on November 7, 2019. (USOSCE/Gower)

Welcome back to the Permanent Council, High Commissioner Zannier, and thank you for your thoughtful and comprehensive report. It is truly impressive — the number of places you have visited and the people with whom you have conferred. The detailed accounting of your office’s past six months of activities regarding national minorities makes it clear that your work contributes to reducing tensions and preventing conflict in our OSCE region.

The United States applauds your efforts to foster cooperation with other multilateral organizations, such as the United Nations, in preventing conflict. We especially commend your work on education policy, specifically in promoting multilingual and multicultural learning. We echo your calls on participating States to ameliorate ethnic and linguistic divides in schools and to promote social cohesion through integration and we’re aware that this is a policy of the OSCE.

High Commissioner, you have traveled extensively throughout the past six months, as you reported, and we appreciate the timely and thorough readouts of your trips. Following your recent trips to Tajikistan and Kazakhstan, we urge the governments of those countries to act on your recommendations for meeting their human rights obligations and their OSCE commitments.

Mr. High Commissioner, we note with special interest your recent trip to Ukraine and we regret that it did not include a visit to Crimea. The United States is concerned about Russian occupation forces’ abuses of Ukrainian citizens, including Crimean Tatars and other religious and ethnic minority groups. We note in your report that you met with Crimean Tatars on your trip to Ukraine. We urge you to maintain a focus on their plight, including followers of the Orthodox Church of Ukraine.

We urge Russia to permit your office, other independent international observers, and independent media unhindered and unfiltered access to occupied Crimea to investigate credible reports of ongoing abuses. If all is well, as Russia and its government-organized NGOs consistently assert, then why not allow independent monitors onto the peninsula to confirm those claims?

The United States applauds your work, Mr. High Commissioner, with Ukrainian officials in protecting and promoting the human rights of members of national minority groups. We note with appreciation Ukraine’s recent creation of the State Service for Ethnic Policy and Freedom of Conscience, per your recommendations.

We were pleased that during your visit to the United States this summer you were able to meet with a wide variety of stakeholders, including officials from the executive and legislative branches of our federal government, state government, and civil society. We note in your visit you communicated with the Helsinki Commission of the United States’ Congress and remind you of the close working relationship between that congressional organization and this mission of the United States to the OSCE. The U.S. remains open to your specific recommendations and suggestions from your trip.

High Commissioner, the United States appreciates your initiatives in Georgia and Moldova and urges you to prioritize your work there. Your engagement in these countries can demonstrate the positive impact the OSCE can have in promoting security and stability in our region – the more we know more about your work there, the better we can support your goals. In Moldova, we noted your April conference promoting multilingual education, as well as your efforts to help the government build a truly inclusive society, which is a cornerstone of both a well-functioning democracy and the settlement process. In Georgia, we encourage your efforts to promote greater participation in public life of members of minority communities and to support multilingual higher education.

High Commissioner Zannier, the United States values your office’s role in providing early warning and early action when tensions arise that involve minority issues, and we strongly support your independence, your mandate, and your role in conflict prevention. The High Commissioner is an OSCE institution that can advance the goal of enhancing peace and security throughout the OSCE region. We thank you for your hard work.