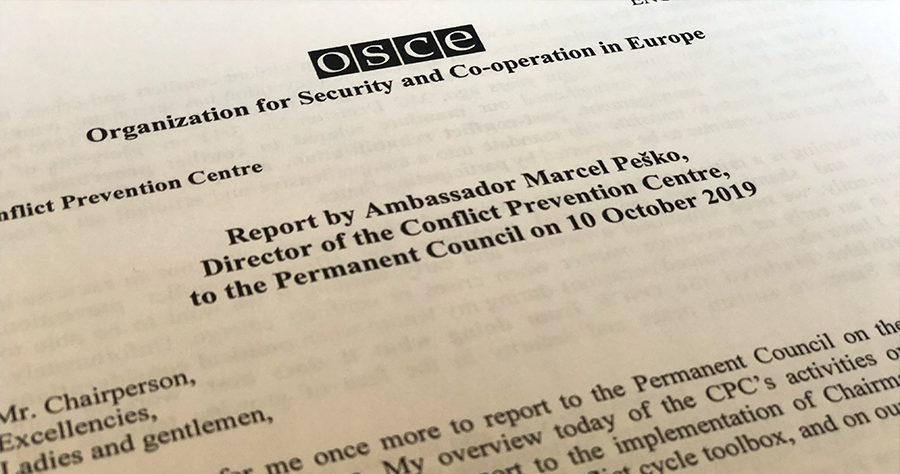 The Report delivered by the Director of the OSCE Conflict Prevention Centre, Ambassador Peško, at the Permanent Council on October 10, 2019. (USOSCE)

As delivered by Deputy Chief of Mission Harry Kamian
to the Permanent Council, Vienna
October 10, 2019

Mr. Chair, I would like to welcome Ambassador Peško back to the Permanent Council and thank you for your detailed report on the work of the Conflict Prevention Center during your tenure.

Ambassador Peško, the CPC was founded nearly thirty years ago, through the 1990 Paris Charter for a New Europe, at a time of great optimism and rapid change in Europe. Barriers, both physical and metaphorical, were being erased.

In the interest of dialogue, at the offset, I would like to offer a few observations on some of the political comments that you included at the outset of your report. I share your view that today the optimism that we had back in 1990 has indeed faded. Dialogue, in and of itself, is not enough to resolve conflict and it’s not enough to restore peace and security in Europe. There is plenty of dialogue at the OSCE. There is plenty of dialogue in other international organizations. There is plenty of dialogue through other channels. Dialogue for the sake of dialogue, dialogue in of itself will not be enough to bring about peace and security in Europe. It won’t be enough to resolve conflicts and it certainly won’t be enough to prevent them. Rather, Ambassador, today we are confronted with a fundamental lack of respect for international commitments and violations of international law, primarily by one participating State. Sir, in our view, respect for international norms, respect for territorial integrity, respect for principles and commitments of the OSCE — this is the surest way to end conflicts and the surest way to prevent them. The conflict in eastern Ukraine and the attempted annexation of Crimea are the most glaring examples of Russia’s blatant disregard for the rules-based international order. Finally, in my humble opinion, phrases and cliches like “blame game” are indeed baseless. They don’t reflect the reality on the ground, and they brush over the real challenges and threats to security in Europe.

Ambassador Peško, the deployment of the OSCE’s Special Monitoring Mission to Ukraine (SMM) garnered international support because the OSCE was the only organization acceptable to the key parties that could effectively engage. The CPC has worked with the Special Monitoring Mission since its inception, ensuring that Ambassador Cevik and his team have the resources they need to make a real difference on the ground, as we have seen in Stanytsia-Luhanska, where the long-awaited bridge repairs are now underway. Ambassador, I share your assessment that the SMM has indeed played effective role. From both administrative and operational standpoints, we appreciate your work with the SMM to streamline its daily reports and to coordinate better the Mission’s management, operations, and security protocols. On this note, I’d like to restate for the record how much I, on behalf of the United States, appreciate the leadership role that CPC under your leadership played in encouraging the SMM to truly take security seriously in the aftermath of the death of Joseph Stone. In order for the SMM to fully implement its mandate, however, Russia must cease its interference and grant the SMM and other international missions unfettered access to occupied Crimea.

Ambassador, we appreciate the Conflict Prevention Center’s support of the OSCE’s Trilateral Contact Group, the Project Coordinator in Ukraine, and the Observer Mission at the Russian Checkpoints in Gukovo and Donetsk, all of which provide valuable assistance to the Ukrainian government and much-needed information to the participating States. The United States welcomes the opportunity to work with the CPC to identify additional areas where we can further improve these missions and ensure that they have the appropriate resources to implement their mandates.

We also value the support the CPC provides to the 5+2 Settlement Process on the Transnistrian Conflict as well as the Geneva International Discussions on the Conflict in Georgia. The CPC also supports the efforts of the OSCE Minsk Group, and of the Personal Representative of the Chair-in-Office, to help the sides achieve a lasting peaceful settlement to the Nagorno-Karabakh conflict.

Ambassador, we agree the OSCE also plays a critical role in enabling implementation of confidence and security-building tools available to participating States to promote security and cooperation in the OSCE region. In particular, we value the CPC’s contributions to supporting the implementation of the Vienna Document, including tracking VDoc military inspections and evaluation visits.

Ambassador, the OSCE’s network of field operations is the nerve center of the OSCE’s work to promote security and cooperation in our region. A participating State’s hosting a field operation is not tantamount to receiving a negative report card. Instead, it can – and should – be seen as a sign of the State’s willingness to strengthen its adherence to our common commitments in order to improve security in the OSCE region. Regrettably, field operations have faced stiff headwinds in recent years. Some were closed permanently. Others saw their mandates increasingly restricted, hindered from helping countries to uphold their commitments and promote dialogue between governments and civil society. Reporting and early warning tools have been undermined. We would argue that the OSCE be empowered to respond affirmatively when participating States have expressed an interest in establishing a presence, such as in Georgia and in Mongolia.

Ambassador, we applaud initiatives such as the Partnership Platform in Tajikistan and the Consultative Mechanism in Kyrgyzstan.

We call on the CPC to support the heads of mission in using these tools and others to facilitate robust dialogue with their host governments and NGOs in order to address the host government’s priorities – and needs of the country. We also applaud the OSCE Academy in Bishkek and the Border Management Staff College for their role in promoting cooperation in Central Asia.

Ambassador, we are grateful for the CPC’s work on other important issues: mediation support, the early warning focal points network, implementation of UNSCR 1325 on Women, Peace, and Security, UNSCR 1540 on Weapons of Mass Destruction, and small arms and light weapons, among them. While celebrating these accomplishments and milestones, we cannot rest on our laurels. We must take concrete and forward-looking action to ensure security and cooperation in Europe.

Finally, Ambassador, as your tenure comes to a close, I wish to thank you for your stewardship of the Conflict Prevention Center and service to the OSCE more broadly. I challenge the Secretary General, the Secretariat, and all delegations around this table to identify a strong and diverse field of talented men and women to be considered for filling the CPC Directorship. An ideal candidate would possess vision and leadership to guide the CPC in a complex environment, and the professional courage to call out participating States for not meeting their OSCE commitments. You can be assured that such an individual would have my country’s support.