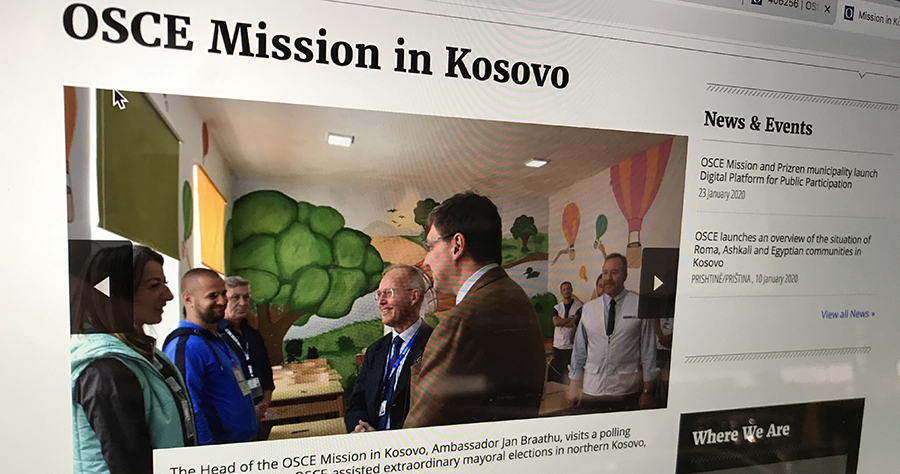 As delivered by Charge d’Affaires Harry Kamian
to the Permanent Council, Vienna
March 5, 2020

Ambassador Braathu, welcome back to the Permanent Council.  I am impressed by the scope and depth of your Mission’s contributions to Kosovo and broader regional security.  Again, let me express my appreciation for a detailed report, a timely submission, and I think most importantly, the rich discussion that we had yesterday at the informal consultations.  These elements, together with your presentation today, help us gain a much greater understanding of the situation on the ground and the important contributions your Mission makes there. So thank you very much, Sir.  Stability, prosperity, and lasting peace in the western Balkans are achievable only when Kosovo is integrated as a full and equal partner. The OSCE plays a critical part in advancing the region toward that goal.

In February, Kosovo’s new government was formed, following elections characterized by the EU election observation mission as “well-administered and transparent.”  Prime Minister Albin Kurti’s government now has an opportunity to advance shared priorities, including normalizing relations with Serbia, strengthening rule of law, and fostering economic growth.  The United States welcomes the new government’s recent steps in the fight against corruption.

As you note, the United States Government is focused on advancing ties between Pristina and Belgrade.  Two U.S. special envoys are working to break through the impasse in Serbia-Kosovo relations, essential to regional stability and prosperity.

The recent agreements to increase air, road and rail connections between Pristina and Belgrade prove that practical solutions are possible and demonstrate that citizens in both countries will see tangible economic benefits from normalizing the relationship.  This is the message Presidents Thaci and Vucic received in Washington last week. The United States has made clear that Kosovo’s government must suspend the tariffs, and both parties must revive negotiations to unlock their countries’ full potential.

The United States relies on the OSCE Mission in Kosovo (OMiK) to help ensure local stakeholders and democratic institutions are capable of advancing regional stability.

Mr. Ambassador, at a time when fewer young people in Kosovo speak the language of those outside their ethnic community, and with inter-communal distrust lingering, OMiK builds long-term cohesion through Youth Empowerment Camps, the Youth Forum Academy, and other youth-focused initiatives.

We encourage you to continue to promote the OSCE’s interfaith dialogue initiatives to help bring the country together.  In an environment rife with rumor, disinformation, and attempts by some to rewrite history, your efforts to enhance media literacy and the safety of journalists is critical in this effort; we encourage you to keep this a high priority.

Your responsiveness to the requests of Kosovo institutions shows that authorities on the ground trust you and your team.  You are a relevant partner and you are a responsive partner. Part of what makes OMiK a reliable partner is its coordination with diverse stakeholders and donors in Kosovo.  We encourage you to continue strengthening those partnerships for maximum effectiveness and to avoid duplication of this effort.

Finally, Mr. Chair, it was unfortunate that yesterday, once again, we could not hear directly from a host country beneficiary about the excellent work of OMiK, as we do in informal briefings with other heads of missions.  It is one thing to hear from an organization about the work it is doing, but it is even more impactful when we hear directly from the host country and its nationals who are benefitting. That is how we know the OSCE is working effectively.  As the OSCE’s leading donor, the United States wants to hear directly from the beneficiaries of our investments. We call on the Albanian Chairmanship to consistently invite beneficiaries to all heads-of-mission informal briefings.

Thank you, once again, Ambassador Braathu, for your excellent leadership.  You have our full support.