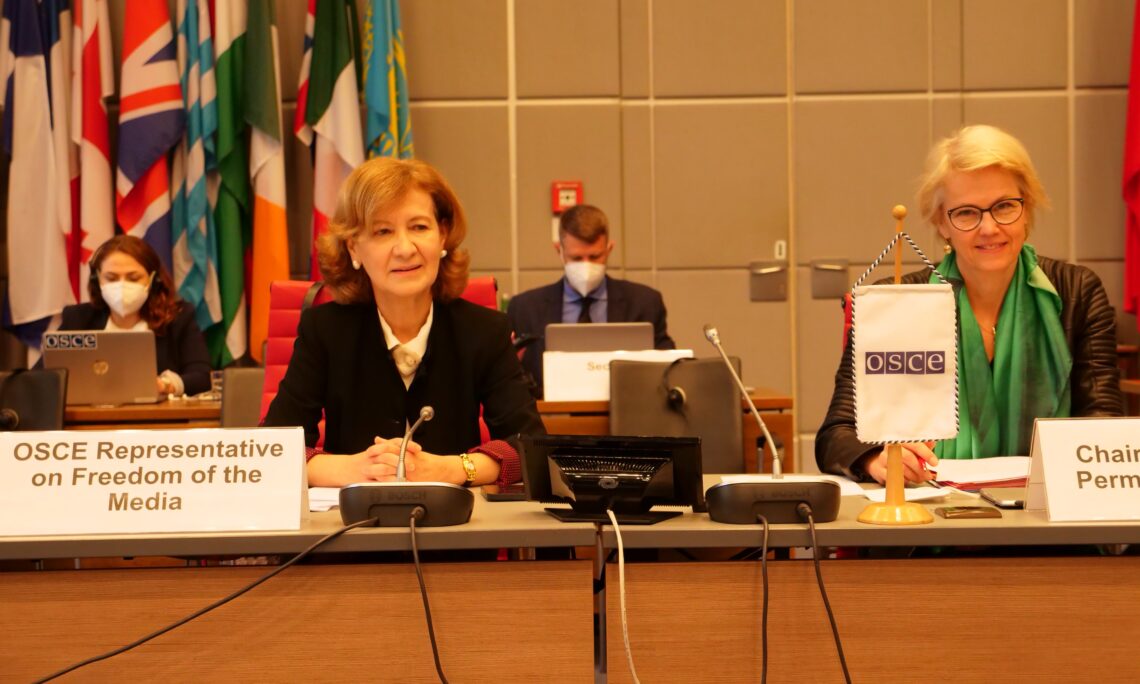 The United States welcomes Teresa Ribeiro for her first report to the Permanent Council as the Representative on Freedom of the Media.  We appreciate your work, welcome your responsiveness to media freedom issues in the OSCE region, and thank you for producing a report after only six months in office.  We also wish to echo your tribute to the first RFoM, Freimut Duve, who passed away last year.  His staunch advocacy for freedom of expression helped pave the way for the creation of the position you now occupy, which serves as a watchdog to protect journalists across all 57 participating States.

Unfortunately, we must concur with your report’s assessment that the past six months have been a difficult time for the exercise of freedom of expression by members of the media in the OSCE region, and agree the current bleak picture, if not addressed by the participating States, will inevitably lead to further decay of media freedom.  Some participating States continue to use the pandemic as an excuse to repress independent media.

We share your concern regarding physical attacks on journalists and the hazards they often face when reporting on large gatherings.  As noted in your report, some of these incidents occurred in the United States during the media coverage of public demonstrations and civil unrest last year.  I want to assure the RFoM and all the members of the Permanent Council that the United States is committed to doing our utmost to protect the safety of members of the press and hold accountable those—including law enforcement officers—who harm or unjustly detain or restrict media workers.  The United States does not target journalists covering protests within our country and enjoys an environment where potential abuses are the subject of public scrutiny.

Ms. Ribeiro, we appreciate the focus your independent assessment places on the deteriorating situation for freedom of expression for media workers within Belarus.  The detention of over 350 media workers simply for reporting on the protests following the August 9 fraudulent presidential election is inconsistent with Belarus’s international obligations and OSCE commitments.  Additionally, as your report notes, the Belarusian authorities often restricted or cut off mobile telephone networks and internet access.  By so doing, they denied their citizens access to vital information about the events unfolding around them, which, especially in times of unrest, can help protect lives and prevent injury.

Furthermore, the Lukashenka regime restricted social media and access to the internet to thwart the efforts of Belarusians in exercising their freedoms of expression and peaceful assembly, as Belarusian civil society relies on those platforms to organize peaceful protests.

We also share your concern about recent amendments to the accreditation rules and procedures of the Belarusian Ministry of Foreign Affairs for foreign journalists, as well as changes to the laws on mass media, on countering extremism, and on Public events, as well as changes to the new Criminal Code.  All of these further aggravate an already dire situation for human rights and fundamental freedoms in Belarus.  We appreciate your offers to the Belarusian authorities to help improve media freedom and the safety of journalists within the country and join your call for the Lukashenka regime to release all political prisoners, including unjustly detained journalists.

The panel discussion on disinformation you participated in this February, organized by the Norwegian delegation at the Human Dimension Committee meeting, provided a much-needed forum for participating States to discuss this very important topic.

Your timely focus on the role of artificial intelligence and its impact of freedom of expression also shines a light on an important topic not being widely discussed elsewhere.

Ms. Ribeiro, we cannot help but note the format of your first report differs very much from that of your predecessor, who examined each of the participating States individually.  We understand that you only had a short time in office to produce your first report.  As we found the prior reports covering the individual participating States extremely useful, we wondered if you planned to keep this new format or will you return to examining the issues on a country by country basis?

The United States fully supports the independence of the RFoM and its work defending freedom of expression online and offline, and the safety of journalists, as expressed in the 2018 Milan Decision.  We commend Ms. Ribeiro’s efforts to expose threats, abuse, harassment, and violence against journalists and other media actors, and her spotlighting of the cases of journalists jailed for their journalistic work.  We join the Representative in calling for the release of all journalists unjustly detained or imprisoned in connection with their work.