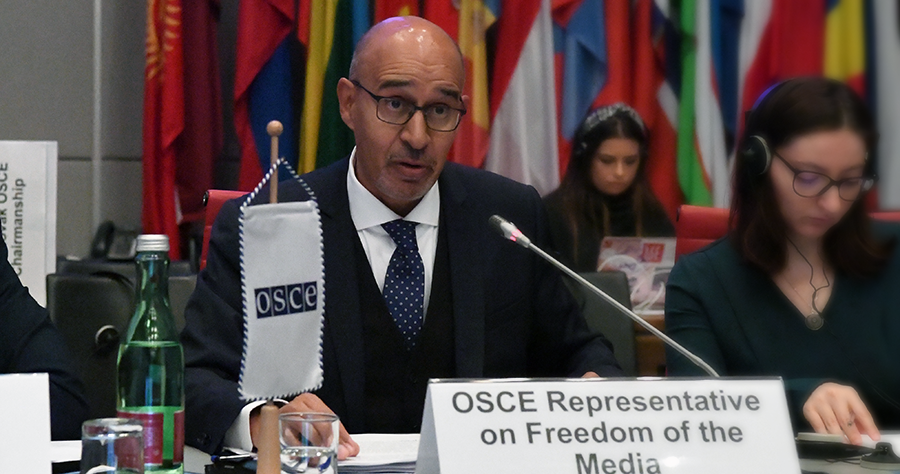 The OSCE Representative for Freedom of the Media Harlem Desir delivers his report to the Permanent Council on November 21, 2019. (USOSCE/Gower)

The United States welcomes back to the Permanent Council the Representative on Freedom of the Media, Harlem Désir. We appreciate your work, and we have been impressed by your responsiveness to issues arising during the coronavirus pandemic. You have rightly placed an emphasis on the impact on freedom of expression resulting from measures taken in response to the crisis. In some cases, troubling emergency laws or draft legislation that your office identified were subsequently revoked or rescinded, so well done.

The United States believes that freedom of expression for members of the press and public is vital during times of emergency because people need to be able to access and share information to protect their health.
Yet, in some participating States, we see troubling efforts to restrict freedom of expression, including press freedom, during the pandemic.

According to monitoring by the human rights organization “Agora,” since the start of the pandemic Russia has prosecuted over 200 people, mostly journalists and human rights activists, for spreading so-called “fake news” related to the coronavirus. Mr. Chairman, during health emergencies as in other times, countries that respect the right to freedom of expression, including for members of the press, are the most democratic and accountable to their citizens.

On July 4, the United States will celebrate the 244th anniversary of the signing of the Declaration of Independence, inaugurating the creation of the United States. Virginian Thomas Jefferson penned the document, which elegantly enumerated fundamental human freedoms, and freedom of expression was eventually enshrined in the First Amendment to the United States Constitution.

While some participating States have tried to portray recent developments in the United States as a sign of weakness and division, we should instead look upon the ongoing civic discourse as a sign of our democracy’s strength and maturity.

Americans work through difficult societal problems openly, knowing their freedoms are protected by the Constitution and a strong rule of law. We are serious about holding individuals and institutions accountable, and our democracy allows us to do so.

The United States works every day with partners around the world who share our commitment to human rights and fundamental freedoms, such as the institutions of the OSCE.

As Secretary Pompeo said, the United States is committed to confronting our challenges head-on, engaging in political processes, holding wide debate, and adhering to our country’s core principles.

Unlike in Russia, where over the last 30 years journalists like Anna Politkovskaya, Natalia Estemirova, Paul Klebnikov and at least 55 others have been murdered for their work, the vast majority with impunity, the United States is committed to vigorously investigating and holding accountable those who commit violence against journalists.

Unlike Russia and some other participating States, the United States does not imprison journalists for exercising freedom of expression, nor do we censor the content of their work.

Mr. Désir, as you well know, your mandate requires you to act as an early warning system, alerting this Permanent Council to non-compliance with regard to media freedom and freedom of expression. Your role as watchman and impartial arbiter is extremely important to ensure these freedoms are equally applicable across the OSCE region and upheld by all participating States.

This report shows you have done an admirable job pointing out the challenges to media freedom across the OSCE and within all the participating States at this difficult time of global pandemic.

In that regard, the United States wants to reaffirm its commitment to the OSCE, to the values of the OSCE, to the ability of the 57 countries to come together and discuss these issues openly and fairly. The United States supports the OSCE, and places value in it, and does not support any efforts made to freeze the organization or to cause it to be ineffective in any particular critical moment. With that in mind the United States joins the EU and other States today in affirming that renewing the terms of all four incumbent OSCE Heads of Institutions would best ensure leadership stability at the OSCE during the challenges of this time of pandemic. Now, in our view, is not the time for an extended leadership void in this important organization, nor is it the moment for a major recruitment effort which would delay the effective efforts and work on behalf of the OSCE and this fundamental institution.