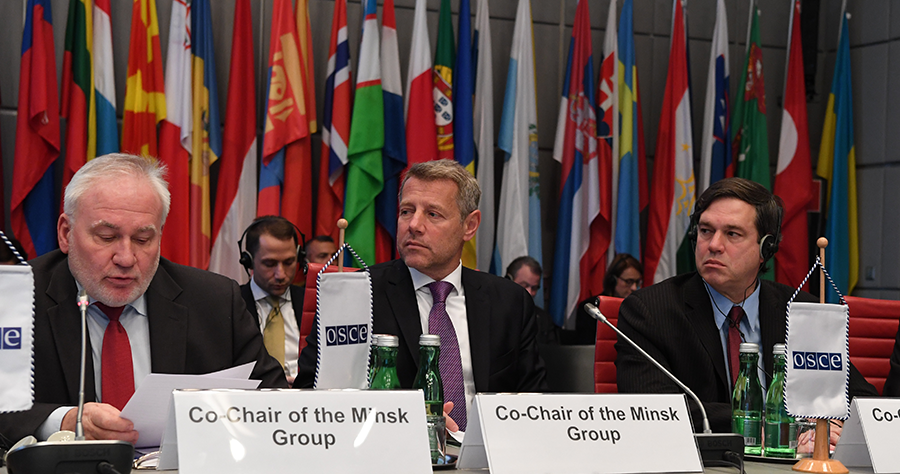 Ambassador Igor Popov of the Russian Federation delivers the first of the reports from the Minsk Group Co-Chairs with Ambassador Stéphane Visconti of France; and Mr. Andrew Schofer of the United States of America. (USOSCE/Gower)

Response to the Minsk Group Co-Chairs, Personal Representative of the Chairperson-in-Office and High-Level Planning Group

The United States joins our colleagues in welcoming Ambassador Popov, Ambassador Visconti, and Mr. Schofer, the Co-Chairs of the Minsk Group, together with the Chairmanship’s Personal Representative, Ambassador Kasprzyk, to the Permanent Council today. The United States attaches great importance to your work, and like our colleagues expresses a commitment to an ultimate resolution to this conflict, with the sides to advance a peaceful settlement of the Nagorno-Karabakh conflict. We thank all of you, including the head of the High-Level Planning Group as well, for your astute reports and updates.

Since your appearance at the Permanent Council one year ago, a great deal has changed. We are concerned about casualties on the Line of Contact in recent months. These casualties illustrate the continuing human cost of the conflict. They raise the temperature on the ground – and in capitals. And, they deepen distrust and animosity, diminishing prospects for a lasting settlement.

At the same time, we are encouraged by the constructive high-level contacts between the leaders and foreign ministers of Armenia and Azerbaijan. Let’s take stock: since your last appearance in this hall, you brought together President Aliyev and Prime Minister Pashinyan here in Vienna. Since your last brief to the Permanent Council, you have also facilitated five meetings of the foreign ministers in Milan, Paris, Moscow, Washington, and at the United Nations General Assembly in New York. This level of contact should – and can – pay direct and positive dividends. We encourage the sides to agree on concrete measures discussed throughout this year on specific humanitarian and security measures to prepare the populations for peace and reduce tensions. We also welcome the simultaneous release of prisoners that took place on June 28.

Yet, agreement on these issues is not enough. We call on the sides to translate these agreements into concrete actions now. The time has come for the sides to prepare their populations for peace, and to refrain from mutual accusations and recriminations. The United States supports confidence-building measures and increased dialogue between Armenians and Azerbaijanis that can stabilize the security situation and foster a more constructive atmosphere for negotiations. Those participating in dialogue must be able to do so freely and without fear of harassment or recrimination when they return home.

Ambassador Kasprzyk, we welcome your assessment of the situation on the ground, and we value the efforts of your team to promote transparency and confidence among the sides. This work is indispensable and has our full support. We appreciate your close collaboration with the Slovak Chair in supporting the Co-Chairs’ mediation efforts and with the sides in stabilizing the situation on the ground.

There can be no military solution to this conflict, and the status quo is unacceptable. The United States is committed to working with the sides to find a lasting and peaceful resolution based on the principles, shared by participating States, of non-use or threat of force, territorial integrity, and equal rights and self-determination of peoples, as embraced in the Helsinki Final Act, which remains the key instruments of principles and conduct for the OSCE member States.