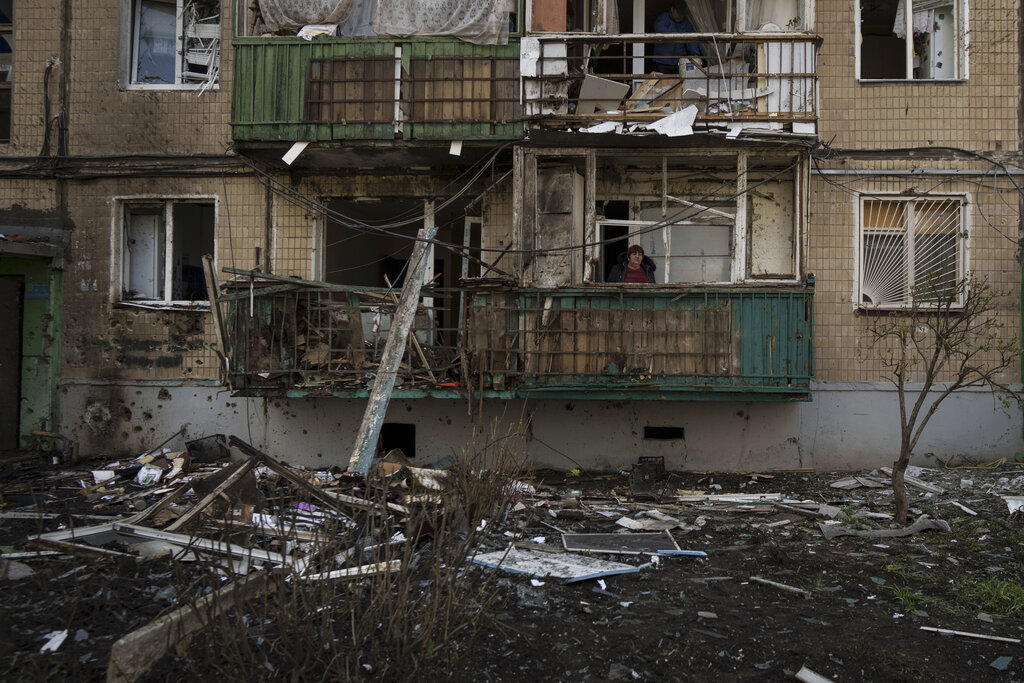 A woman stands on the balcony of her apartment, damaged after a Russian bombardment in Kharkiv, Ukraine, Thursday, April 21, 2022. (AP Photo/Felipe Dana)

On the Russian Federation’s Ongoing Aggression Against Ukraine

As delivered by Ambassador Michael Carpenter
to the Special Permanent Council, Vienna
April 22, 2022

When Russia launched its unprovoked war against Ukraine, its deluded and lawless objective was to destroy Ukraine’s sovereignty and independence, to subjugate Ukraine to its will.  Two months later, President Zelenskyy and his government not only remain in power; they have repelled Russia’s onslaught against Kyiv and Kharkiv and, in doing so, exposed widespread atrocities committed by Russian forces.

The Kremlin’s attempted takeover of Ukraine is a failure on every level.  Russia could – today – acknowledge this obvious truth and end the war it started.  The Kremlin could – today – acknowledge the obvious truth that they will never overcome the Ukrainian people’s indomitable strength and unity in defending their country’s independence, sovereignty, and democracy against subjugation by an autocratic dictatorship.  Russia could – today – begin the process of taking responsibility for the war crimes that members of its forces have committed in Ukraine and for the immense humanitarian crisis its bombardment of Ukraine’s cities and critical infrastructure has caused.  Russia has done none of these things.

Instead of ending its unprovoked and brutal war – instead of sparing not only the people of Ukraine, but also Russia’s own forces more needless deaths – the Kremlin this week launched a fresh offensive in eastern Ukraine.  Russia has continued its barbaric destruction of Mariupol and bombarded hundreds of targets across Ukraine, including in Lviv, where a Russian missile struck a car garage hundreds of miles from any fighting, killing seven civilians who had gathered to enjoy coffee before work.  And instead of calling commanders to account for war crimes, President Putin has bestowed military honors on the brigade responsible for the killing spree in Bucha.

Today, some 100,000 civilians remain trapped in Mariupol without access to food, water, or medicine.  Despite this, on April 18 Russian supersonic bombers were used to drop unguided bombs on the city.  Russia has refused pleas from Ukraine’s forces at the Azovstal factory to establish a humanitarian corridor to evacuate civilians, just as Russia’s forces in Mariupol and elsewhere have repeatedly refused to agree to terms on humanitarian corridors.  On Tuesday, Russia additionally rejected the UN Secretary General’s call for a cease-fire to allow for civilian evacuations.

As many as 22,000 trapped civilians have died so far in Russia’s siege of Mariupol, according to the head of the regional military administration.  Mariupol Mayor Vadym Boychenko reports that Russia’s forces have forcibly deported as many as 40,000 civilians to Russia.  According to the mayor’s office, Russia’s forces have funneled many of those it has deported through four so-called filtration camps established all around the city.  Local authorities estimate as many as 27,000 people are being held in these camps.  The mayor’s office additionally reports that Russia’s forces plan to run all remaining residents through a filtration process and move those who pass a screening test to the Russia-controlled part of Donetsk, where some would be forcibly conscripted.  The mayor’s office reports that of those Mariupol residents Russia has “filtered” so far, 5 to 10 percent have failed the screening, and their fate is unknown.

The Kremlin has openly declared its intention to conquer eastern Ukraine, and developments on the ground leave little doubt we are witnessing the beginning stages of a massive offensive by Russia’s forces in the Donbas.  All indications are that the battlefield dynamics will soon shift from closer-range combat to longer-range fires where artillery and multiple launch rocket systems are critical.

Dear colleagues, Ukraine desperately needs modern weapons and ammunition to defend itself in this new and deadly phase of the conflict.  It needs these weapons and ammunition now, as quickly as we can possibly get them there.  Not long-term negotiated contracts to purchase weapons, but the immediate provision of advanced capabilities to protect its civilians from the horrors of this war.  If ever there was a time to energize our support for Ukraine, it is now.

Yesterday, President Biden announced yet another $800 million of security assistance tailored to meet critical Ukrainian needs, including heavy weapons like howitzers.  The United States has now committed more than $4 billion in security assistance to Ukraine since the beginning of the Biden Administration, including approximately $3.4 billion since the beginning of Russia’s unprovoked invasion on February 24.  The United States also continues to work with its Allies and partners to identify and provide Ukraine with additional capabilities.  We must move swiftly, together, to immediately provide Ukraine with capabilities to protect its civilians from the horrors of this war – from atrocities like those in Bucha, Hostomel, and Borodyanka.

This is a war for sovereignty against subjugation, for independence against imperialism, for the principles of international law against the brute force of a predatory power.  The task before us is to rise to the moment and provide Ukraine with the capabilities it requires.  The stakes are high for Ukraine and for us all.  I call upon all of us here today to urge our own governments to step up and deliver.  There is no time to lose.