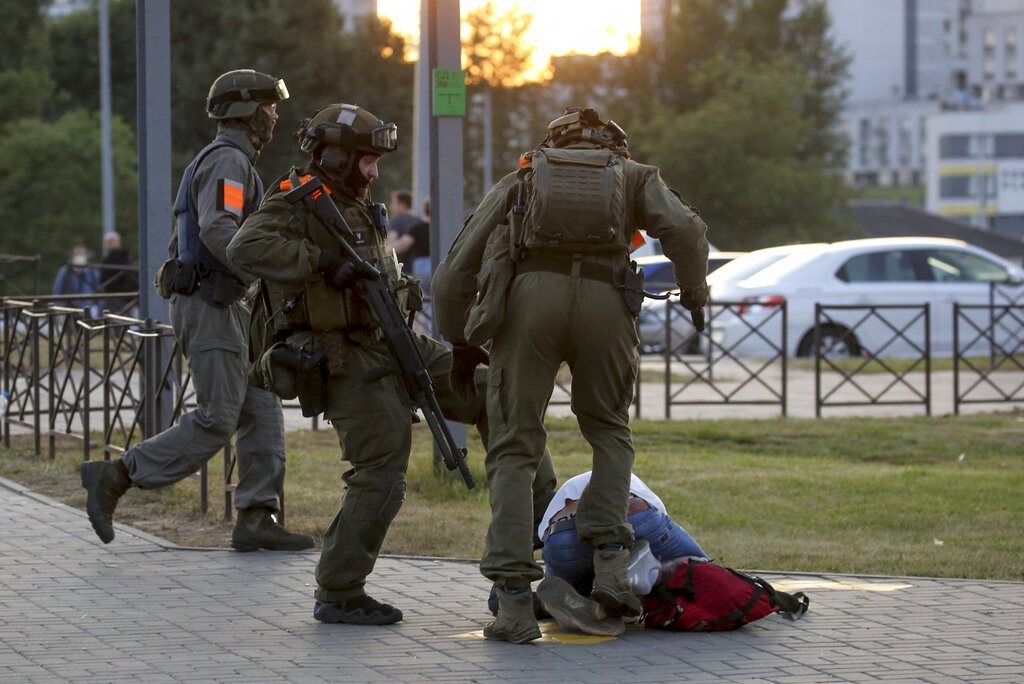 On the Sentencing of Political Prisoners in Belarus

to the Permanent Council, Vienna
September 15, 2022

On September 17, 2020, the United States and 16 other OSCE participating States invoked the Moscow Mechanism to examine alleged human rights violations before, during and after the fraudulent August 9, 2020 presidential election in Belarus.  The subsequent report clearly found that the 2020 presidential election in Belarus was “neither free nor fair” and that the Belarusian authorities engaged in sustained and systematic violations and abuses of the human rights and fundamental freedoms of the Belarusian people.  The strength of the report lies in the extensive, credible accounts by survivors and eyewitnesses as well as documentation by NGOs of abuses.  The report’s chilling section on torture details the severe abuse of detained protesters, independent journalists, civil society activists, bystanders, and ordinary Belarusians.

Unfortunately, these unconscionable human rights abuses are ongoing. The Lukashenka regime continues to employ brutal tactics to suppress dissent.  There are credible reports that beatings and forms of torture and other cruel, inhuman or degrading treatment or punishment are routine and that they have been used to extract forced testimonies and for “confession” videos. Unexplained jailhouse deaths go uninvestigated as in the May 2021 case of political activist Vitold Ashurak, who died suddenly at a penal colony under mysterious circumstances.  Authorities first told his family he died of a heart attack and then, when asked about his head injuries, they claimed he fell.  The same month, authorities claimed that an 18-year-old protester in Minsk allegedly committed suicide after an interrogation, a claim made without evidence or investigation.

The Lukashenka regime also continues its pervasive practice of mass arrests and detention of political prisoners to crack down on freedoms of peaceful assembly and expression.  As of today, there are over 1,300 political prisoners in Belarus and this number continues to grow.  More than 900 people were arrested and detained the week of the February 27 constitutional referendum.  That same week, another 200 were detained for opposing Russia’s war against Ukraine.  Political prisoners are held in freezing, overcrowded, and filthy conditions.  They are deprived of food, water, sleep, and personal hygiene.  And they endure severe beatings and are denied medical care.

Those being held include Coordination Council Presidium members Mariya Kalesnikava and Maksim Znak, Radio Free Europe/Radio Liberty journalists Ihar Losik and Andrei Kuznechyk, and long-time opposition activists and politicians Mikalai Statkevich and Pavel Sevyarynets.  The long and ever-expanding list of political prisoners also includes former presidential candidates Syarhey Tsikhanouski and Viktar Babarika, Viktar’s son Eduard Babarika, as well as well-known human rights defender and Viasna chairman Ales Byalyatski.  The list goes on:  journalists and media heads Kseniya Lutskina, Maryna Zolatava, and Iryna Leushyna; student Artsyom Bayarski; trade union activist Alyaksandr Yarashuk; business owner and activist Pavel Belavus; former security official and activist Mikalai Kazlou; and other brave Belarusians imprisoned for exercising their human rights, like Stsyapan Latypau and Anatol Latushka. I am reading from this long list of names because these are the victims of this regime, this brutal regime, and I want their names to be recorded. I want their suffering to be recorded in this Council.

They all come from different backgrounds and walks of life but they have two critical things in common.  They are all currently suffering the same repression at the hands of a dictatorial regime afraid of its own people, and they are all Belarusian patriots who believe in a democratic, prosperous, and fully sovereign future for Belarus.  A Belarus they will all help to build one day soon.

We call on Belarus to implement the Moscow Mechanism recommendations I’m going to read them out:

We haven’t gone through this list in a while, and I want to make sure all of these are on the record, these are binding upon Belarus.