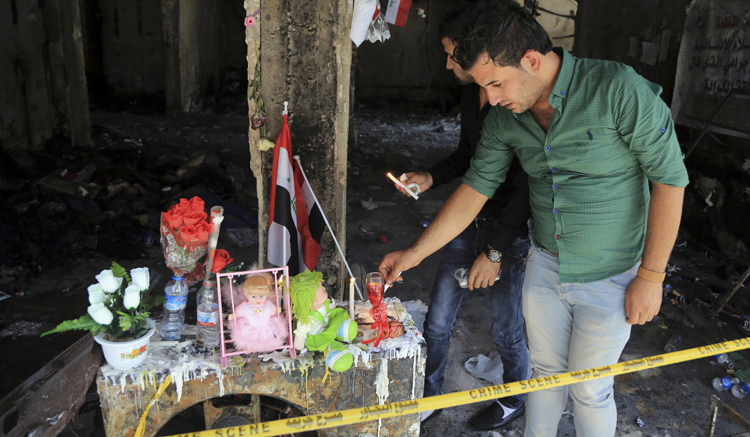 People light candles next to dolls belonging to Rabab Faris, 5, a bomb victim at the scene of a massive truck bomb attack in the Karada neighborhood, Baghdad, Iraq. (AP Photo/Karim Kadim)

Yesterday was Eid al-Fitr, the holiday marking the end of the holy month of Ramadan. Several weeks ago, Secretary Kerry marked the beginning of Ramadan by attending an interfaith Iftar reception in the State of Virginia, which was held shortly after the terror attack in Orlando. Secretary Kerry said then that the strength of our democratic societies lies in the decency and common sense of regular citizens such as the people who turned out in the thousands after the tragedy in Orlando, supported by millions of likeminded people around the world from every race and religion. He said that strength lies in identifying how to address the very particular challenge from a small minority of people who choose the path of violent extremism.

Just as people of different cultures, religions, and nationalities stood with the people of Orlando and the United States, the United States stands with the people of Jordan, Lebanon, Turkey, Israel, Bangladesh, Iraq, and Saudi Arabia who recently suffered horrific terrorist attacks that killed hundreds of innocent people. Our deepest condolences go out to the families of those killed, and we hope for a speedy recovery for those wounded.

These attacks were carried out during the holy month of Ramadan by violent extremists some of whom claimed that religion justified their violent acts, but their intent was to sow division and fear. The United States stands in solidarity with the people of these and other countries that have suffered from terrorism, and we stand ready to work with them to counter violent extremism and radicalization that leads to terrorism.

Respect for human rights and fundamental freedoms is our greatest reservoir of strength and stability as we confront terrorists who seek to undermine our societies and the values upon which they are built. We look forward to working with OSCE participating States and our partners to promote these values and help build resilient communities that can confront the scourge of terrorism.