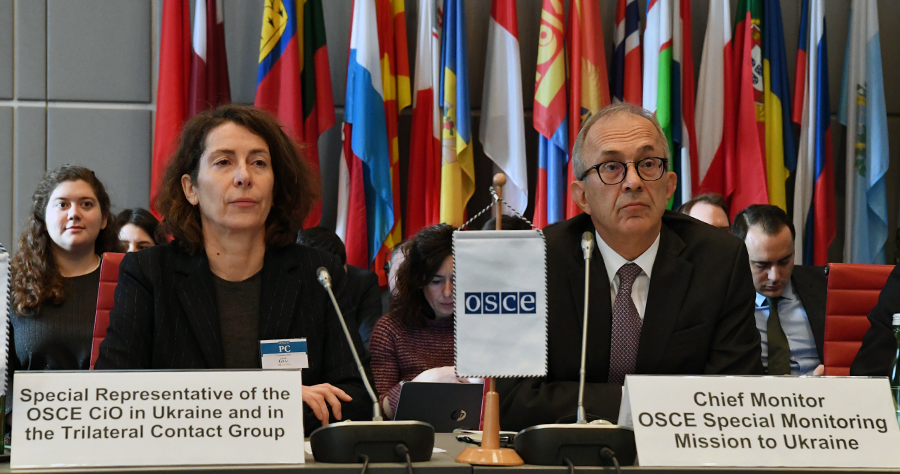 Ambassadors Çevik and Grau, the United States welcomes you back to the Permanent Council.  You have our deepest gratitude for your continued efforts to bring about a peaceful resolution to the Russia-led conflict in eastern Ukraine.

Chief Monitor Çevik, we recognize the challenge you and your team face on a daily basis.  The Special Monitoring Mission, as the eyes and ears of the OSCE on the ground in eastern Ukraine, deserves nothing less than the fullest support of all the participating States.  The United States is concerned about the increasing frequency of efforts by Russia-led forces to hinder the work of the SMM. As cited in your report, restrictions on the monitors’ Freedom of Movement “significantly affect the Mission’s operational posture and ability to monitor the security situation.”

Although Russia tries to cast itself as a mere “mediator” in this conflict, Moscow unceasingly obstructs the paths to resolution.  As Russia propagates disinformation in the Permanent Council and elsewhere, Russia-led forces impede the work of the Special Monitoring Mission via frequent restrictions of its Freedom of Movement.  Russia and the forces it arms, trains, leads, and fights alongside target the Mission’s UAVs on a daily basis through signal interference or small arms fire.  The Mission’s cameras are also targeted.  SMM spot reports on 7 April, 9 April, 24 April, 6 May, 17 May, and 30 June all detail instances of GPS signal interference with Mission UAVs.  According to your report, this “persistent strong GPS interference” has “further narrowed the corridor for SMM’s operations.”

Actions taken by Russia-led forces to hinder the work of the SMM are unacceptable.  We call upon Russia to direct the forces it controls in eastern Ukraine to afford the SMM and its monitors the full Freedom of Movement needed to fulfil the mandate of their Mission and to cease targeting of UAVs and other technological assets paid for by the participating States of this Permanent Council.

Ambassador Grau, as this is your last PC, I would like to join the Chair and the other participating States, who have spoken, to thank you very much for your service to this Organization, and we commend your unwavering pursuit of peace and of tangible outcomes within Trilateral Contact Group: pressing for new disengagement areas, an updated demining plan, and new entry-exit crossing points.  We recognize that the lack of progress on these and other issues is a clear result of Russia’s intransigence

Instead of engaging in good faith and taking concrete actions to improve the lives of the civilians residing in areas it temporarily controls, Russia used the TCG to stymie progress.  We all see Russia’s ploy for what it is—an attempt to force Ukraine into direct negotiations with Moscow’s proxy forces.  Russia’s obstructionist approach to peace negotiations exposes its true motive in fomenting violence in eastern Ukraine—a pointless attempt to obstruct Ukraine’s freely chosen path of full integration with the Euro-Atlantic community.

This year, Russia ignored all calls for transparency during its unilateral military buildup and failed to respond to Ukraine’s requests to explain its actions under Vienna Document mechanisms.

Just this week, a Human Rights Watch report detailed the torture and ill-treatment of individuals detained in the so-called “Donetsk People’s Republic.”  Since May 14, de facto authorities have held Oksana Parshina on dubious espionage charges.  She is pregnant.  Three other women, Natalia Statsenko, Elena Zaitseva, and Olga Mozolevskaya, were reportedly denied necessary medical care while in the custody of Russia’s proxy authorities.  Mozolevskaya was reportedly tortured and held in communicado for four years.

Ukraine’s sovereign territory of Crimea remains to this day under Russian occupation.  Its residents have endured more than seven years of harassment and mistreatment at the hands of Russian occupation authorities, who routinely target Crimean Tatars, ethnic Ukrainians, and members of other ethnic and religious minority groups.  Journalists, bloggers, and civil society activists face arrest, imprisonment—and torture—for voicing their opposition to Russia and its occupation of Crimea.  On July 6, a court in Russia-occupied Crimea extended for another six months the pre-trial detention period for journalist Vladyslav Yesypenko, who was tortured in an attempt to coerce a confession.  We reiterate our call for his immediate release

One thing is very clear.  Russia is not and has never been a mediator in this conflict.  The United States urges Russia to reverse its unhelpful and harmful approach to the conflict it foments and remove its forces and hardware from eastern Ukraine.  We demand Russia end its occupation of Crimea and cease its mistreatment of Crimean Tatars, ethnic Ukrainians, and others.  It is now time for Russia to end its adventurism in Ukraine, recall the commitments it has made to the principles of the OSCE, and fulfill its Minsk commitments and responsibilities under these agreements.

Madam Chair, the United States fully supports Ukraine’s sovereignty, independence, and territorial integrity within its internationally recognized borders, and within its territorial waters.  We do not, nor will we ever, recognize Russia’s purported annexation of Crimea.  We join our European and other partners in affirming our Ukraine-related sanctions against Russia will remain in place until Russia fully implements its Minsk commitments and returns full control of Crimea to Ukraine.